Let’s just put it this way: after I finished Bakemonogatari (by finished I mean watched all 15 episodes in one day), everything on my currently simulcasting list looked like utter crap & I didn’t want to watch any of it (sorry, Nobunagun and Wizard Barristers). Put another way, I now understand why a lot of people swear by the Monogatari series, because Bakemonogatari was an incredible experience, one I truly feel blessed to have been able to have.

I ended up giving Bakemonogatari an 8/10, but to be honest, I’m not incredibly happy with that rating. There may need to be some revisions in my rankings as I continue with the Monogatari series (Nisemonogatari is up next).

Like my favorite anime, Blast of Tempest, for which you’ll notice I’ve never written a review, Bakemonogatari is difficult to review because it has the “it” factor in spades. It’s not a show that you watch from a distance; it grabs you and pulls you in. I will do my best to break it down into tangible pieces as I work through this review, but forgive me if I occasionally break down into incoherent babble. But before that, I present you with the gorgeous first opening of the show: “Staple Stable,” sung by the voice of Hitagi Sanjougahara, Chiwa Saito.

Structurally, Bakemonogatari is set up in five distinct arcs, all held together by the main character, Koyomi Araragi, who has recently been turned into a vampire, then restored (9/10 of the way, at least) to being a human. Each arc focuses on the aid he gives five different girls as they deal with supernatural problems of their own, each derived from a different part of Japanese mythology and folklore. Sadly, I am quite ignorant of the myths to which the show refers (as I suspect most are), but happily no prior knowledge is necessary to enjoy the show.

Bakemonogatari rings in as the third show that I have seen from the anime studio SHAFT (the previous two being Madoka Magica and the currently broadcasting Nisekoi), and these three shows are definitely all from the same studio. SHAFT’s distinctive style and director Akiyuki Shinbo’s violent direction combine with the story and characters to create a visual production that is unlike anything I’ve seen before, differing even from the previous SHAFT shows I have seen. Characterized by dramatic poses, imposing facial expressions, sharp cuts and bold color pallets, the animation is pretty much inseparable from the story. They are one and the same. I can’t really adequately describe them, so have a few screenshots instead

Sonically, the highlights among the four OPs are the already linked “Staple Stable” and Hana Kanazawa’s “Renai Circulation,” as well as supercell’s ED, “Kimi no Shiranai Monogatari.” The soundtrack didn’t really catch my ear most of the time, but there were also a number of time when it grabbed me like a monkey hand and plunged me even deeper into the show. The fact that these occurred occasionally (usually at critical moments of the story) just proves how good the music is.

The tone and atmosphere of Bakemonogatari, derived from the music, direction and animation, are splendid, evocative and unique to the show. That’s all that can be said.

Now that I’ve more or less covered the presentation, I want to talk about the part of the show that I care about the most: the characters. They are the heart and the true stars of the show, along with their voice actors, all of whom are excellent, at the very worst.

While Kanbaru, Hanekawa, Nadeko and Hachikuji are all wonderful characters in their own right, and excellent and welcomed members of the cast, the real stars are Araragi and the transcendent Hitagi Senjougahara. Dangerous, mysterious, beautiful and riveting, Hitagi falls for Araragi soon after he saves her and they become a canon couple in episode 5. Hitagi, sadly, is pulled out of focus for the 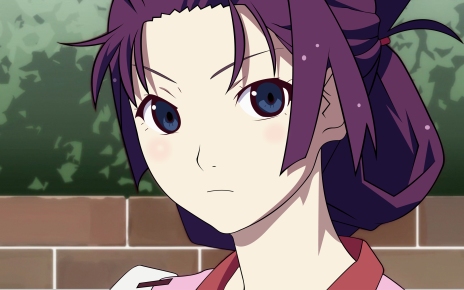 remainder of the show, with the important exception of episode 12, which was my favorite episode of the entire 15-episode series, and her permanent influence on the rest of the show. Much like Aika Fuwa from Blast of Tempest, Hitagi is a force in the show, even when she’s not on screen.

To really give the characters of Bakemonogatari the analysis they deserve is beyond the scope of this review. They are just so competently able to speak for themselves over the course of the show that the best I can really say is to just watch it and see them for yourself. There are numerous scenes which consist of just the characters standing in one place and talking, and it speaks to the depth of the characters and the strength of the writing that these moment are just as, if not more, gripping as the action.

Despite all its strengths, there were two definite issues that I had with Bakemonogatari. If you have been reading my reviews at all, you can probably guess what the first one is. Yup, fanservice. Now, that’s not to say that all the fanservice in Bakemonogatari was fanservice that I despised. For example, the fanservice that arose in the second episode at Hitagi’s house came across to me, if not as tasteful, at least as appropriate and even necessary to the character. Sadly, I cannot say the same of all the fanservice moments in the show, and some of the worse ones did detract a bit from my enjoyment of the show. My second issue was one that was somewhat appeased as the show wore on, but even by the end of Bakemonogatari, there were still some moments of comedy that just seemed out of place in the overall tense and dark tone of the show. There are also a couple of really out of place moments involving younger female characters, and all I can really say about them is that it is a huge shame that they are in there, because they are exploitative and inappropriate for a show that shines in so many other ways. 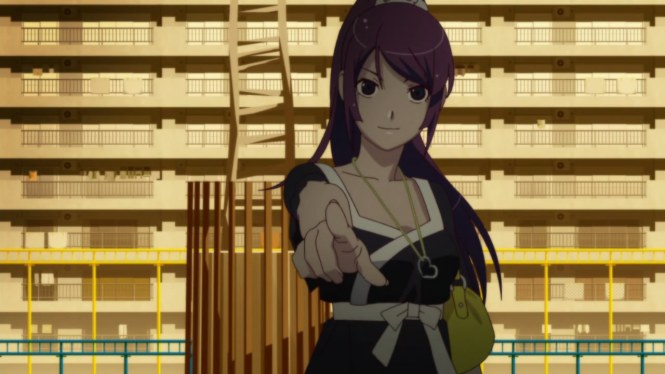 With that being said, it’s to the credit of everything else in the show that I still feel that Bakemonogatari deserves its high rating. I’m in the business of finding shows that are worthwhile to watch, and even the morally bankrupt scenes, my distaste for the fanservice in Bakemonogatari and the occasional awkwardness of the humor were not enough to knock this show anywhere below an 8/10.

You just have to watch Bakemonogatari. That’s all there is to it. The show is a work of art: gorgeously animated, sonically lush and expertly written. Despite the obvious differences, it does remind me of Blast of Tempest, which is high praise indeed. Bakemonogatari is a unique experience, and if you like anime or art at all, you owe it to yourself to watch this incredible series. I’m out of words. I can’t praise this anime enough. Just beware of the sexual content that crops up here and there.