So, no Zankyou no Terror this week, which was a shame. Sailor Moon Crystal also was absent (but I’m not crying about that). Overall, I wasn’t a huge fan of the week, as there were a couple episodes that actively upset me and a few others that were somewhat disappointing. But, Argevollen (arguably the most consistent show airing this season), Haikyuu!!, and Gekkan Shoujo Nozaki-kun are all standbys and none of them let me down. Thank goodness for that. 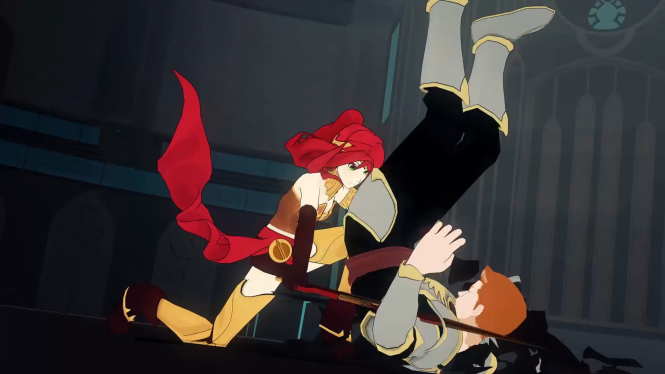 Free, Eternal Summer, Episode 9: A unexpectedly really, really good episode from this show this week compelled me to write a full blog post on it (plus, no Zankyou no Terror). Glad Free! Eternal Summer stepped up to the starting block this week.

Fairy Tail, Episode 22: I had huge, huge problems with Fairy Tail this week, and none of them had to do with the production quality or the writing or the pacing or anything like that. No, this week I’m pretty pissed off about the actual content of the episode. Last week, I wrote about how I was a bit disappointed that the jittery cutting of the episode was ruining the compelling internal struggle Ultear was dealing with, but this…this is not what I wanted. It’s one thing to drive a character into the ground with an identity crisis; it’s another entirely to push them to the very edge, to have them sacrifice their life (and the “I don’t deserve to live” refrain was sickening), and then to let them die thinking they accomplished nothing at all. What the hell? I expect better of this show—existential despair without redemption is a one-way shortcut to earning my ire. And no, it’ s not good enough that Ultear did indeed save lives. It was her struggle, and Fairy Tail left her run dry and run out. And then to cut to the triumphs of everyone else and just forgetting Ultear altogether? Thank you, to whoever is directing this mess—way to trivialize Ultear’s sacrifice.

Damn, I’m madder than I realized. 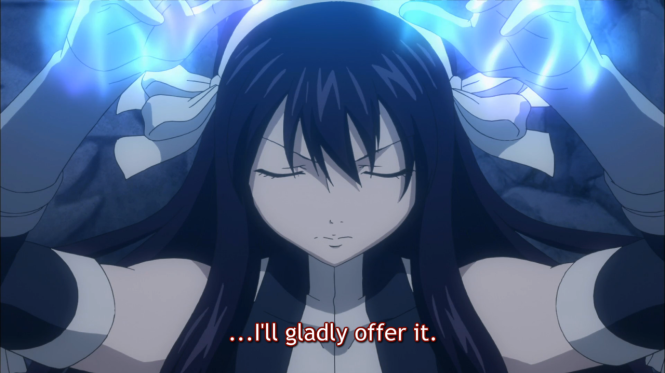 Don’t worry, Ultear. I’ll remember you, even if your show doesn’t.

Argevollen, Episode 9: Argevollen is sticking to its guns, that’s for sure. It steadfastly holds to being exactly what its been from the beginning—solid, calm, unsensationalized. Even during the Arandas raid on the Ingelmian base (and what a total butt-kicking that was), the show remained grounded in a certain dull reality. Yes, things were exploding all around and soldiers were getting thrown around like ragdolls, but it wasn’t grisly, it wasn’t extraordinary. Just more people doing their jobs. I particularly liked the focus on the Ingelmian side and Richtofen this week—his facial expression as he looked at the bottle in the final shots of the episode was a great moment for him. Again, the causes don’t matter here. It’s about the people, and Argevollen continues to give the characters it has chosen space to breathe and expand.

Aldnoah.Zero, Episode 9: Well, it should be pretty obvious what I want to talk about this week—Rayet’s “murder” of Asseylum (if Asseylum is actually dead, I’ll eat my hat). I actually went out and read a couple people’s notes on the ending before coming to write this piece and it seems like a lot of people are attributing Rayet’s motivations to jealousy (centering around her own existence as a Martian and bitterness over the death of her father) and isolation. I honestly struggle to draw the line between jealousy and murder without other factors, though. Of all people, Rayet should realize that killing the princess isn’t at all the path to her revenge—she’s been directly harmed by those who wanted to kill the princess, and yet she still does their dirty work for them? And that brings me to the part of the scene that concerned me most—Rayet’s eyes. She had what I kill “dead eyes,” which very often in anime indicates an altered state of mind. If there was anything interfering with her agency when she attacked Asseylum, I’m not going to be happy.

On another note, yay…Saazbaum is also motivated by revenge. I like revenge as a motivation a lot, but Aldnoah.Zero has too many people floating around with that as their motivation. It dulls the impact and significance for everyone if everyone’s the same.

Haikyuu!!, Episode 22: They packed a ton of stuff into the first half of this episode. By the time the eyecatches came up I was expected the episode to be done, but there was still half of the episode left to go. It’s nice to see Kageyama truly working to change on the court, and it was really great to get a little bit more about Tsuikishima this episode, too. As I’ve said before, Haikyuu!! does a good job of utilizing its cast to shift the focus of the match and provide different perspectives on the situation. Making Tsuikishima a central part of Karasuno’s stand to win the set not only changes things up from the “Hinata Wins with Speed” refrain, but also draws him more into the team and into the story. The final 3 episodes should be awesome. I’m expecting Oikawa and his team to win in the end, but it’ll be a good match either way.

Glasslip, Episode 9: How many times can I write about this show and exclaim over how incredibly odd and disjointed it seems before I get sick of that line of analysis? Apparently, it’s good for at least one more week because this week’s Glasslip was just another installation in a long line of episodes that left me totally baffled by the end. But even though I don’t really think Glasslip is a very good show, I still find it sort of spellbinding. This episode rushed past again in a series of cuts, obtuse conversations, and inside jokes we the audience aren’t really privy to. Glasslip is holding us at a strange distance, and I’m starting to wonder if it is more of a stage play-esque production than a screenplay. In any case, we got a confession (I think) from Sachi this week—where will this take the story? I don’t know and, to be honest, I don’t care. I stopped watching Glasslip for the plot long ago. 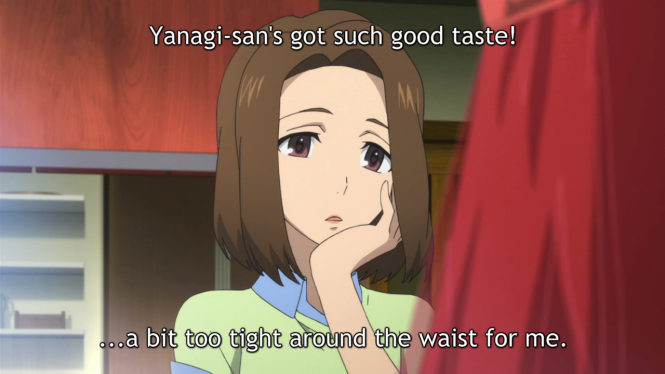 Another good parenting moment brought to you by P.A. Works.

Gekkan Shoujo Nozaki-kun, Episode 9: Another pleasant episode, filled with Sakura’s delusions and a bit more of Nozaki playing the straight man than usual. There was some really pretty artwork happening during the first half of the episode in the rain which, given the kind of standard school setting/Nozaki’s apartment backgrounds we’ve been getting for most of the show, was a nice new thing. The wordplay jokes in the back half went a little bit over my head (too much thinking to get a real laugh from me), but overall it was a good episode. Definitely not the show’s best, but whenever you’ve got an episode with Sakura and Nozaki running around under a school blazer and Yuziuki dumping an umbrella on Sakura in an episode, it’s a win.

Hunter x Hunter, Episode 145: Welcome back, Gon. Welcome, back Han Megumi—man, it is good to hear your voice again. Once again, I was reminded of Killua’s line from early in the Chimera Ant arc: “Gon, you are light.” As Gon walks in, a smile on his face, a bright light shines behind him and there are visibly no traces of the horrifically twisted person he had become after Kite’s death. But the scars, I’m sure, are still there. Togashi doesn’t strike me as the type of author to resort to something as convenient as memory loss just to restore the emblem of the Gon we once knew. Sure, the image of Gon leaping, starfish-wise, towards Leorio recalls the kid from the beginning of the show, but I doubt he’s totally reverted to what he once was. We obviously still have to deal with the aftermath of Killua’s arc here (a confrontation with Illumi seems to be inevitable[?] before the show goes on hiatus), but for today let’s just bask in the joy of having Gon with us once more. Welcome back, kid. We sure missed you.

A Question: So, what did people think about the jump between Rayet’s jealousy of Asseylum (an understandable emotion) to the action of trying to kill the Vers princess? Did you buy it? Did you not? Let’s chat in the comments!