I’ve always had mixed feelings about Japan’s idol industry, and AKB0048 First Stage [Satelight, 2012] is kind of the perfect review of everything I find enchanting about the system and everything I find terrifying and troubling about it. Like many anime shows that heavily feature music, I seriously believe in the unitive and uplifting abilities of music and, perhaps even more than just music itself, performance. Having been a part of a show choir for three years in high school and one year in college, the similarities between idol performances and show choir performances have always struck me. (Don’t know what show choir is? Here’s a video of a nationally renowned high school show choir from California.)

So, the trouble comes when I have to compare the affection for the past and resonance with my own experience generated by these shows to the dark side of the industry such shows sometimes tackle, but often gloss over. But before that, have some tunes!

Let’s start off where AKB0048 and I agree unequivocally—with the power of music. The very setting of the show, as a dystopian future where entertainment has been banned on some planets and the idol group AKB0048 throws guerrilla concerts accompanied by incredible light shows, bullets, lasers, booming backing tracks, and glowing imps, is one that highlights the show’s basic belief that music is a powerful force for bringing hope and joy to humanity. I love the setting and the idea of the show. It may be a bit heavy-handed, with entertainment deprived planets being portrayed in gray colors with dirty blue collar workforces and entertainment accepting planets like AKB0048’s cleverly named home planet of Akibastar depicted as vivid and full of life, but the symbolism is pretty spot on. While this statement could probably apply to all of the arts, in the world of AKB0048, to live without entertainment is to live in hopelessness and drab despair.

So, I really do believe that the mission of AKB0048 one is an important one and one worth depicting. I can’t remember if it was in Wake Up Girls or in Love Live! 2, but in one of those shows, a character says something along the lines of, “If we have the ability to make people happy, we should use it.” I feel pretty strongly about this concept, which makes it easy for me to relate to the successors and trainees of AKB0048 when they plead to put on their concerts for the fans even at the risk of their own lives. After all, in this universe, they aren’t just bringing entertainment. They’re bringing hope.

Where I start to find myself struggling with AKB0048 First Stage is at the level of the performer. In my time as a performer (both in show choir, which is really not that far off from idol performances, and in musicals), I spent a lot of time thinking about how I could reach the audience better with my voice, with my dancing, with my facial expressions. Neither AKB0048 nor I think it’s enough to just show up and perform—you’re giving something to the audience when you get up on stage, and you’d better be giving them the best you have or it’s not worth it. But how do you get there? And does the response you get from the audience or the amount that you’re able to give to them justify all the time, sweat, and tears you’ve used to get to that point? Does being miserable yourself matter if you’re still able to reach the audience?

AKB0048‘s answers (and I think the idol industry’s, as well) to the second and third questions seems to be pretty solid yes’s. Of course, AKB0048 has the luxury of being able to put its characters into situations where they are generally happy—moments of pain and melancholy are inevitable soothed away by the companionship of friends. Which is not to say that I disagree, but I find the simplicity of the answer troubling because I think it’s more complicated than that. Yes, having friends is a huge support in a situation like this. But what about when your friends are also your competitors?

Ultimately, I think it comes down to personal fulfillment in the actual performance. I’ve been in many different types of performing groups (besides just choirs and musical casts), but among them all I’ve never found anything as fulfilling or capable of generating such a rush of emotion, adrenaline, excitement, and joy as simultaneously singing and dancing in front of a huge, energetic crowd. So, when I see the concert scenes in AKB0048, flying mini-stages and all, and see the crowds going crazy and the idols smiling and looking like they genuinely would love doing this more than anything else in the world, I believe it. Or I want to.

The thing is, when I take the rest of the show into account, I struggle to actually accept that Nagisa, Yuka, Chieri, and the rest of the trainees actually are performing because they like performing. I see it in the current successors, in their confidence, in their smiles, and in the way they essentially ooze passion for performing and for life. In the trainees, I don’t see this—and I don’t like that. They’ve all got their own reasons for being members of the group, but for each of them, their “dream” is vague, barely defined beyond “be a member of AKB0048.” Which is fine, except for the fact that being a member of AKB0048 means performing. In other words, the performance is secondary to being in the group. 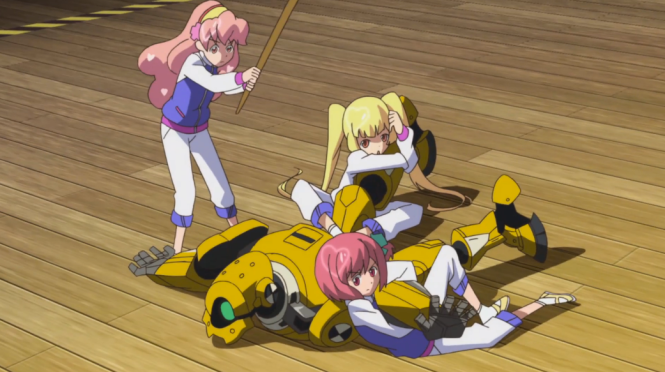 I struggle with this. I really do. Especially because it is an issue that has two sides. After all, if the successors can totally relish and love the performance, it’s because they’ve already invested hundreds and thousands of hours into practice and because they’ve already reached the goal of being in the group. But, this is where the show’s departure from the realities of the idol industry comes in.

In the real life idol industry, membership (at least to my limited knowledge) depends primarily on competence and ability. In AKB0048, succession is based on a pseudo-religious/semi-mystical inheritance of the founding members’ spirits. While the essence of those spirits isn’t specifically defined, the conversations revolving around the current Takamina, Kanata, and succession seem to indicate that to have the “soul” of a successor is to care about the performance above all. In other words, the successors’ love of performance is what has allowed them to become members of the group, rather than coming to love performance through the group. Maybe it’s unfair of me to project this concern on to the trainees. After all, who am I to say that their dream of being part of the group is lesser than the desire to perform? It’s not as if love of the performance doesn’t come with its own set of less-than-admirable qualities—it’s in the pursuit of a “perfect” performance that humanity can start to be lost. Uniformity, brutal honesty, lack of sympathy for those out of step, and rabid competition within the group and between groups. These happen. I’ve been through grinding three hour practices after a full school day and weekend-long in which tempers rise, people get worn out, and falling behind is on the border of being unacceptable.

For me, it was all worth it when I got up on stage and could give the very best show I was capable of giving. After all, to give a performance less than your best is not only to slight your audience, but also your team, your talents, and yourself. While the motivation of the idol industry may be commercial rather than communicative in nature, the push to execute a quality production is one I see as reasonable. Does it justify the methods—the inhumanity, the harshness, the commodification of the performer? I feel as though I ought to say no, and yet…it’s a place where I’m conflicted because I’ve seen the results of a group that’s too nice. Perhaps it’s the performers’ responsibility to prop each other up in the midst of the methods and preserve each others’ humanity. 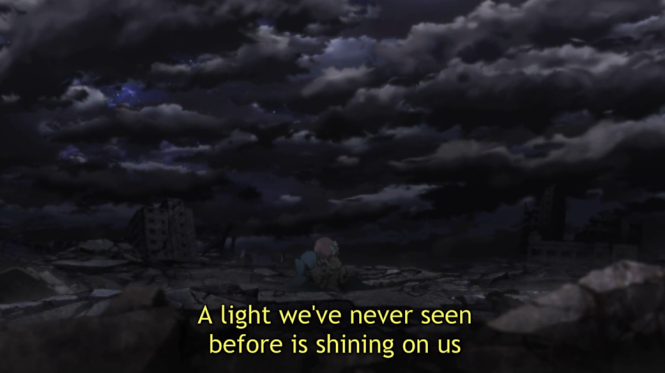 I don’t want to pretend I have the answers here, nor do I want to overstretch the parallels between my own experience in a high school show choir and the realities of Japan’s idol industry or the high stakes world of AKB0048 First Stage. But the point I’m trying to make is that AKB0048 raises questions that I think are legitimate and that I also think generally get discarded because of some of the sordid truths of the real life idol industry.

There are still a number of things I haven’t touched on, because the idol industry and AKB0048 and my own experiences contain a huge range of issues—the contract between the performer and the producer, the role of competition, the marketing of idol groups, and the problems of fandoms. AKB0048 has its own set of answers, the idol industry has others, and I have my own. 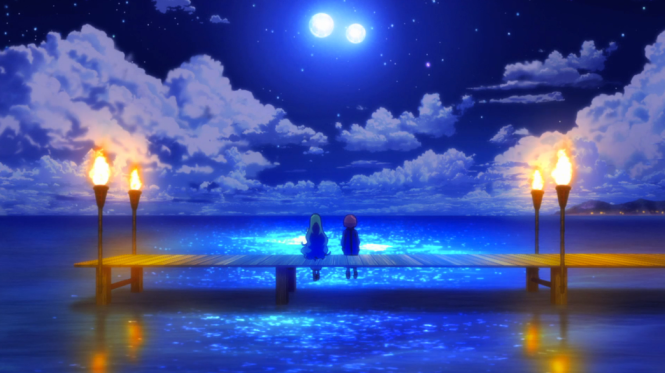 As for AKB0048 First Stage as a show…well, I liked it a lot, but I’m not sure where it belongs in my value scale of rating shows. There are a number of things to recommend the show: the great music, some superbly beautiful imagery, some really likable characters, solid CGI, effective use of subplots, and the overall solid structure of the story. There are similarly a number of content elements I find troubling and technical elements I find subpar. But AKB0048 Next Stage is a direct continuation of First Stage, so I’ll withhold judgement on the entire franchise until I’ve seen it all. At the very least, I’ve had a lot of things to think about in the past couple days and an opportunity to reflect nostalgically on my past, and I’m always grateful for that.