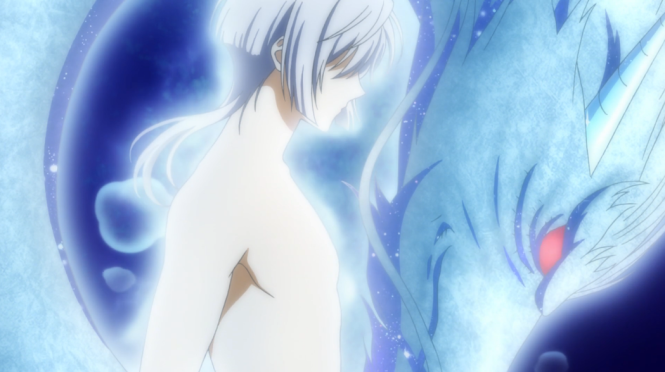 The structure of the White Dragon’s village is really interesting, because it effectively exists for the sole purpose of perpetuating…well, it’s not even a single bloodline so much as it is a single “genetic” trait. It’s an odd cross between religion and social structures and traditions that forms around a single person. Yona’s introduction into their culture, then, resurfaces an odd sort of old-new element. After all, while the White Dragon served Hiryuu, the White Dragon tribe has served only the White Dragon for hundreds of years. So, when Yona as Hiryuu’s reincarnation to appear before, they dig into the depth of their cultural consciousness and react to her based on a long ended myth—and that myth still informs the narrative of how their village functions. Yona’s very existence effectively begins to recycle the myth, so that, as the Grandma says, they will wait for the White Dragon to return after fulfilling his duty, just as the original did.

Ki-ja the person, then, has been somewhat trapped by his role as the White Dragon. As he says, there’s a certain dysfunction in the fact that he is the one with sacred power, yet he is the one the village exists to protect. That’s certainly a statement on how the White Dragon’s village views sacred power—it’s something to be used for a specific purpose or, in this case, a specific person. Without the channel for his power, the White Dragon instead becomes something of a cultural artifact, the essential cog that spins the functioning of the entire village. It’s really a fascinating example of cultural objectification—the institutional narrative of the entire village depends on the White Dragon needing to be guarded from the outside world until his master appears. Without regards to Ki-ja as a person, the village uses him as a representation of the essential myths that allow the village to function.

But, Ki-ja the person (not as the White Dragon) is impatient for the day that his turn in the story will come. Like the White Dragons before him, he’s been compelled to remain in the village by the forces of his village’s needs and his culture’s myths. He seeks release from this stage of stasis. Even the little comedy moment of the Grandma harassing him about having no romantic prospects on the horizon (I can relate to that one), and his plea for his master to hurry represents the tension between the village’s expectations for him and his own desires. I do really like that the motivation for Ki-ja to leave the house (the decision the leads him to meet Yona) is to protect the village—he is, in a sense, acting on his own desires, not on those of the village, and it is in doing so that he meets his destiny. Fate comes to the ones who seek it, perhaps?

Yona’s certainly not totally aware of what she’s doing to the village’s mythic structure, but she seems to at least understand that she’s taking something important away from the village. But for her, it doesn’t matter. She recognizes the possibility that the White Dragon won’t lend them his strength—and she’s prepared to carry on without it. There’s a kind of beautiful irony in Yona preparing to move on without the White Dragon, if necessary, and that being the moment Ki-ja sees her and understands instinctively that she is the one. The actual moment of his revelation is portrayed in brilliant reds and described as “blood running backwards,” which I think represents a core certainty in his realization. Blood often symbolizes life itself, and so it’s not just Ki-ja’s blood that responds to Yona, but his very life. 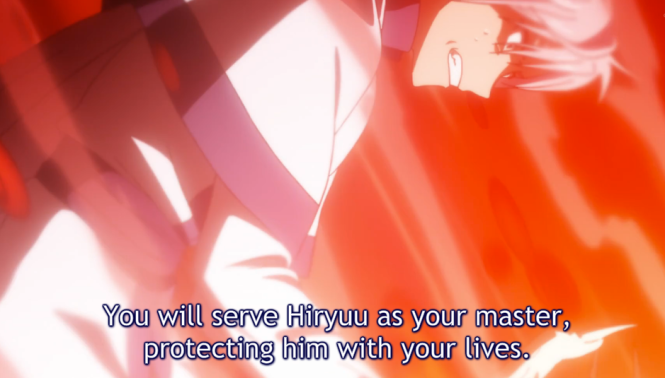 It’s not insignificant that the first thing Ki-ja thinks of as he sees Yona when waking is his father, and the generations of White Dragons that came before him. “I am grateful!” he exclaims, and I think it goes beyond the simple joy of finding his king into the realm of personal, generational, and cultural fulfillment. As the village’s mythic center, Ki-ja has been allowed to see the validation of their existence and way of life and to be the focal point for that divine action. I found it to really be a moving moment.

The last thing I really want to talk about is Yona’s small speech to Ki-ja before accepting his power. She calls herself a scoundrel, which is the exact word that’s been thrown around multiple times this episode (by the old man who guided them in, by Ki-ja himself stalking to confront the intruders), and confesses the lack of grand and noble aspirations. It’s an important moment for her: firstly, to be honest with the divine creature whose assistance she’s requesting, and secondly, to be honest with herself. We get a quick shot of Hak smirking at her revelation, but I think it’s telling that he doesn’t try to stop her like Yun does. Yona will be the type of person she wants to be, and that means holding no illusions about what her true goals are. 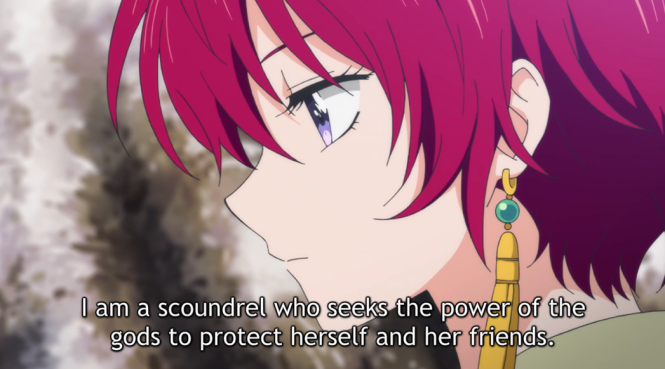 The rest of the episode is more or less just reverse harem-esque macho banter between Hak and Ki-ja, and the themes touched on by Ki-ja’s farewell to the villagers fall in line with the rest of the cultural observations I’ve already made. As far as the actual story goes, I did think the episode was a little slow. Amusing, sure, but I was expecting the introduction of another conflict before the end of the episode and we didn’t get one. In narrative terms, there wasn’t all that much that happened, even with all the interesting exploration that the show did on cultural mythology.

Here’s hoping the next episode can put both the thematic depth and narrative execution together next week!

6 thoughts on “Akatsuki no Yona, Episode 10”