Winter 2015 is here. It’s so here. So far, really, so good. There hasn’t been anything that’s compelled me to drop it outright (although a few shows have come close), and most of the shows I was truly excited for showed up well. Add a crop of decent premieres to five solid to excellent ongoing shows and you’ve got a pretty darn good start to the season. Either that or, after a fall season that failed to conclude with a show above 7/10, I’m just really happy to see some new anime.

Just a reminder that Shirobako is ongoing, that you should be watching it, and that it’s hard being in anime world.

Well, Yuri Kuma Arashi is Ikuhara all the way though…except it’s not quite the Ikuhara I fell in love with when watching Revolutionary Girl Utena. Which is fine! Really, it is! YuriKuma is a different show and I can accept that—I can come to terms with the fact that it utterly lacked Utena‘s elegance and feeling of substance in the first episode or the fact that Tsubaki came across completely without personality. It is, as can be so easily forgotten when sifting through the myriad of new shows at the beginning of a season, just a first episode. It’s not as if I found the episode totally without any sort of purpose or significance. But this was enough for me to know that I want to see Yuri Kuma Arashi as a whole production, not as 12 separate parts. For that to happen, I’m putting the show on hold until after it’s aired.

Absolute Duo: Some things should be good, but suck. Something should suck, but are good. Absolute Duo, almost miraculously, fell into the later category more often than not in its premiere. A show I literally only picked up because Yui Horie was voicing a side-character and because I clearly haven’t learned my lesson from Magical Warfare (magical high school) or Rail Wars! (also had a Hocchan-voiced side-character), Absolute Duo surprised me by feeling a bit fresher than most light novel adaptations of its ilk. Between a fantastic looking ED, a harpsichord background track in the first scene, the classroom scene with an incredibly weird comedic tone, some genuine laughs, and some cringing laughs, Absolute Duo managed to make me enjoy it despite being riddled with clichés and tropes I’ve seen over and over again. The PV for episode two doesn’t look promising, but for now I’m hyped, if only because my extremely low expectations were surpassed.

Saekano—How to Raise a Boring Girlfriend: Something about this one just didn’t quite click with me. Megumi Kato, the normal girl in a harem consisting of a consolidated artist-tsundere-childhood friend, a friendly and physically aggressive musical girl, and the smug writer girl, seems like she actually has potential to be an entertaining character and (possibly) end up messing around with the tropes surrounding the harem genre. Elsewhere, though, Episode 0 was filled with really racy fanservice and the kinds of meta “jokes” that were barely funny the first time I heard them. Now, I didn’t hate it the episode and Saekano looks pretty nice, but episode 1 is really going to have to impress me to keep me on board.

I wasn’t expecting much from this Shounen Jump title, but I was honestly quite pleased by this first episode. Sure, there was some of your typical anime clunky exposition, but for the most part we get to see our protagonist Nagisa (wish he had actually been a girl) without grating internal dialogue and Koro Sensei is instantly likable without totally erasing how threatening he is. There’s a lot to swallow as far as the premise goes, but I care a lot more about how they’re going to make this work than I do about the fact that you have to accept a bunch of absurdities to get to this situation. There are a lot of weird dynamics, strange thematic threads, and offbeat contradictions in the way Class 3-E is set up. Of course, it remains to be seen if Assassination Classroom makes good on all that wonky potential, but this was an easily digestible episode and I’m looking forward to the rest of the show. 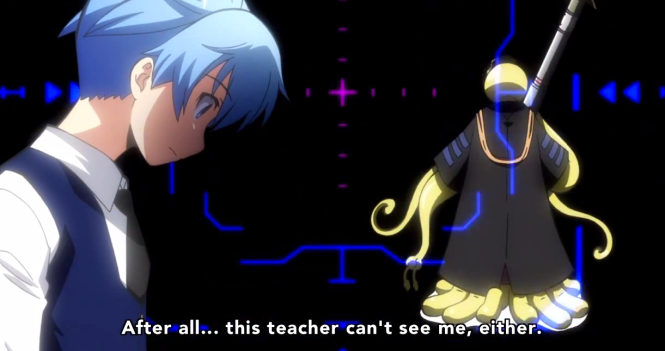 Too Short to Tell: Military!

Two terrible jokes and then a bunch of exposition in the first episode, but looks like it might have potential for some funny craziness, so I’ll stick with it for a bit.