Alright, Part 2 of my Winter 2015 first impressions is here (Part 1 available here)! For me, this was the bigger selection of shows I was excited for and, as you’ll see, there were both some really easy keepers and some really easy drops. There really aren’t too many bubble shows this season after the first week, and Isuca is the only show left to air that I care about. I’m currently at 16 shows (including carryovers), but I’m expecting that number to go down by 2-4 shows. The spread is pretty good, too, with both Mondays and Wednesdays being empty. Anyhow, this was a very, very good batch of shows. Lots of fun times ahead in Winter 2015!

Obligatory Reminder: Garo is also still airing, and you should be watching it.

Death Parade: Honestly, Death Parade was a little more than I had bargained for. Having seen Death Billiards, I knew I was in for a somewhat merciless examination of humanity animated in painful beauty. This first episode was exactly that, but the added element of this being a married couple made this episode extremely difficult to watch. If there’s a flaw in the generally creative and thoughtful premise of Death Parade‘s “death game” set-up, it’s that it seems specifically designed to push at least one person so far that they barely even seem human. Which is not an unduly kind of hopeful thing to watch. I’m withholding judgement on that front for now because it looks like Death Parade might take some time to focus on the characters behind the bar, but there’s something about the surface-level unfairness of the game’s ambiguity that always makes me want to see someone figure out the trick before the game starts. In any case, this is a pretty tough show to watch, but it’s extremely well-made and uncomfortably thought-provoking. A surefire keeper. 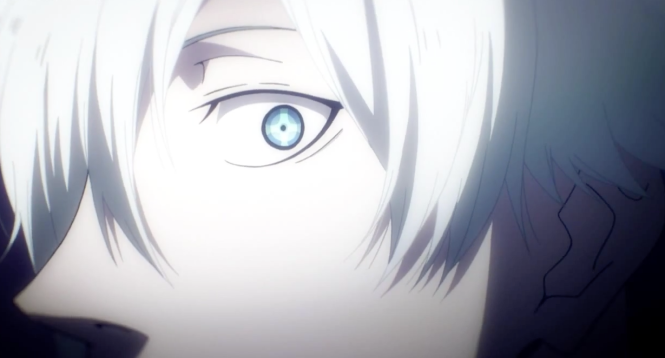 Rolling☆Girls: Predicted pet show of the season. Confirmed pet show of the season. Kyousougiga and Kill la Kill are the names I’ve seen thrown at The Rolling Girls most, but this show is nothing to me if not Yozakura Quartet-like. The whole idea of territory and place and the way people rally around each other and a central identity based on location is straight out of the YZQ playbook and I love it. Combine that with an bubbly sense of aesthetic whimsy that far transcends Kill la Kill‘s near-obnoxious tendencies, and you’ve got a show that hits me in sweet spot like no other show has this season. Everything from the colors to the music to the cute character designs to the fun-gun plot points (like an impromptu ramen eating contest) to the inherent positivity that a show like this is bred to embody knocks it out of the part from me. My only hesitation is that the total engagement effect hook was somewhat less potent than I had hoped, but that’s often a mood thing more than anything else. In any case, keeping, loving…rolling.

In the best way possible, Durarara!! hasn’t changed a bit since four years ago. This first episode was still everything I loved about the first season: from Celty’s bashful adorableness to the character-centric OP sequence to big old flashbacks, it was all there. I was somewhat worried that, having marathoned the first season, I wouldn’t be able to enjoy this season properly on a weekly basis, but those fears with dispelled really quickly. This is a world that just sucks you in with its unique vibes and excellent offbeat soundtrack and colorful personalities. It’s everything I love Durarara!! for being, nothing more and nothing less. And it’s all here. In short, I’m thrilled to have Durarara!! back and I’m keeping it. 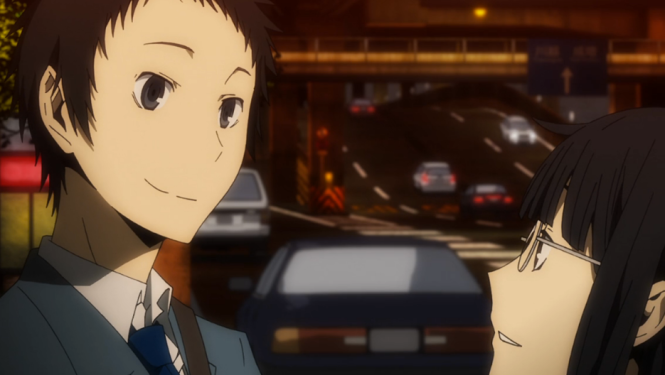 Junketsu no Maria: For a show with so many pitfalls that could make me dislike it—dealing with the Catholic Church, Maria’s status as a virgin being a plot point, the apparently inevitable sex jokes—I actually found Junketsu no Maria to be quite charming. Maria herself is one of the most likable protagonists of the season, the character designs are bright and cute while also being unique, and the plot/premise seems to be flexible enough to tackle any number of potential stories. It also looks like most of the characters we met this episode are going to be recurring characters, which makes me really happy, as I found most of them to be interesting. I don’t really remember much of the plot summary, so I’m curious to see where the actual story will go. In the mean time, it was a pleasant watch and I’m happy to be keeping it. 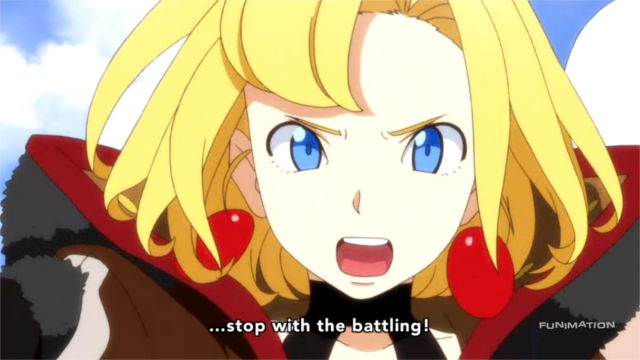 Koufuku Graffiti: Far more inoffensive than I had anticipated, far less SHAFT than I had anticipated, and far more likable and easy to watch than I had anticipated. Koufuku Graffiti might eventually end up being a schedule casualty, but with Saekano and Military! still on the bubble, it could find a nice place as this season’s moe show in my watching queue. The thing that struck me most about this premiere was how cozy the show was without feeling repetitive. Koufuku Graffiti certainly doesn’t seem interested in treading new ground in terms of plot events or character types and looks to be limited to a few locations, but a general feeling of warmth pervades the show. It’s sort of like a nice cup of tea, just with a few surprises when SHAFT decides to make a simple bit of eating super enhanced visually. These moments actually end up feeling quite out place in the midst of the rest of the show. Keeping until I get bored of it. 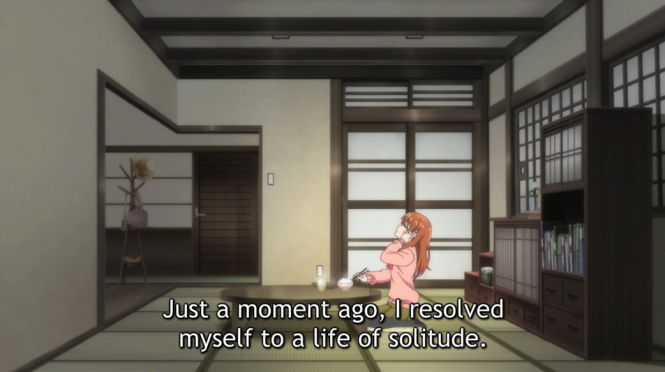 Aldnoah.Zero 2: I don’t like to use expletives on my blog except when absolutely necessary, so its bit difficult to talk about Aldnoah.Zero and how I feel about this follow up episode to the absolute trash that was the first season’s finale.

This is just absolute, nonsensical crap in the worst, disrespectful way I can imagine. Aldnoah.Zero doesn’t care about its characters, its audience, or its story. It’s unrestrained, completely self-indulgent thrill-seeking for the sake of delivering shock and sensation and violence and surprise. And I hate it. I really, really hate it. I hate how it killed the princess. I hate how it revels in Slaine’s suffering. I hate how Inaho has a solution to freaking everything. There are some sorts of trashy shows I can enjoy in spite of, or even because of their trashiness. Aldnoah.Zero makes even that impossible to do. This is a soulless, awful show and I’m dropping it. 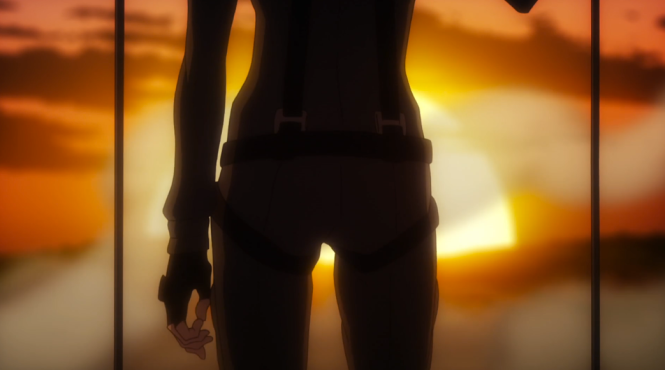 At least I got to see Inaho Sunset Butt once more before I quit.

Fafner Exodus: To be totally honest, there’s a decent number of things to like about Fafner Exodus, from the grandiose classical soundtrack’s ability to convey a sense of scale (unfortunately ill-matched to the actual events of the episode) to the character designs avoiding the typical mecha anime looks to the naturalness with which the storytelling introduces the characters. But, this is still a sequel and I’m confused enough about what’s actually going on and the characters atypical and naturalized designs actually make it really hard for first-time watcher (or anyone, probably, as it’s been 10 years since the initial series) to keep track of who is who and what their relationships to each other. Frankly, I feel like there’s an inkling of a decent story and a solid show here, but I’m not really engaged enough to find out what it is. Dropped.

World Break: Holy cow that was astoundingly bad. Sometimes I like to write a lot about why I’m dropping a show, but this (sakuga omg) and this ought to be enough. Oh, and besides the fact that the animation was clearly not among Diomedea’s top priorities this season and besides the fact that the content was  offensive in its treatment of the female characters, the execution of pretty much everything was so incredibly lifeless and badly organized and horribly written that it was tough even to laugh at it. Dropped. 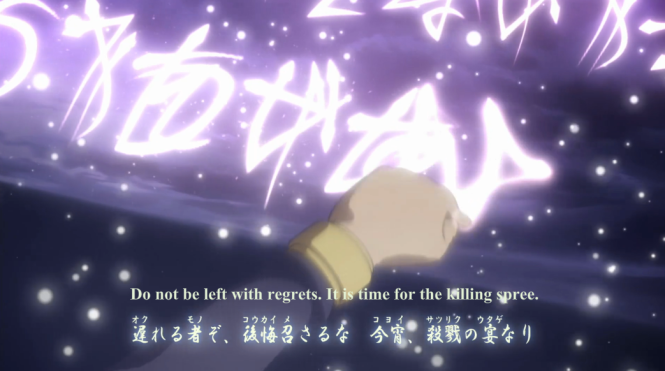 And it started off so well, too…