I’m just now realizing that—once again—I’ve found my way underneath 10 airing shows that I’m keeping up with (the count, as you’ll see, is 9). As I’m still only keeping up with the things I really want to keep up with, I’m feeling pretty good. I also think about these reduced schedules (as opposed to earlier in the season when I was up around 13 shows) in terms of “having more time to do more writing,” but maybe it’s better simply to think of them as reducing some of the pressure. As always, thanks for reading and commenting—I’d probably have given up somewhere along the way if not for you guys!

K: Return of Kings, Episode 7: A lot of talking for an episode I expected to be an action highlight, and the action we did get wasn’t particularly well-animated. You’d think that would mean this episode of K was a letdown—and I guess you could see it as such—but I continue thoroughly enjoy the way the show experiments and tries to do different things. Mixing 2D animation and digital effects (like you’ll see in the clip of Anna activating her King powers) is nothing new to anime, but K is so particular about the way it controls the color of these things that it still strikes me as somewhat fresh. The soundtrack, as always with K, was also kind of fascinating this week—quite different in tone and nature than last week’s selection. Whatever you want to call it, I think K continues to be a multi-sensory experience like no other—I keep pulling out these individual clips because I find the way the visuals and the sounds blend together to be fascinating. And that’s enough to tide me through episodes with comparatively little character work, like this one. Gray king next up!

Nothing in this week's #k_anime that was as inspiring as last week, but here's Anna anyways. pic.twitter.com/iL3OQcgKwp

Comet Lucifer, Episode 7: Another pretty solid on-the-road episode from Comet Lucifer. Sans last week’s reflections on love and what love is, this episode felt a bit emptier, but with Orange continuing to deliver on the mecha fights (although I really wish they hadn’t been set at night) Comet Lucifer continues to be really engaging to watch. In essence, what the show is now is what I’d hoped it would be from the start—except now we’ve also got Do Mon and Gus’ shared backstory coming into focus as well. And it’s just in time, because with Felia’s power suddenly going into overdrive, it seems we’re approaching the plot’s final stages. We don’t really have much of an idea about what the ultimate villain’s plan actually is, but that doesn’t matter as much as Comet Lucifer just delivering an enjoyable experience: which is exactly what it’s doing.

Gundam Tekketsu, Episode 7: Now this…this was exactly the kind of episode I’ve been expecting from Tekketsu since we went into space. As a self-contained episode covering one single incident from start to finish, it fit nicely within the context of the overall plot while still offering set-up, stakes, and drama all in one 25 minute span. On an extremely superficial level, I’m quite glad to see a few more female characters around—especially as ace mecha pilots. Now that Tekkaden’s proved themselves enough to actually negotiate with Turbines, I’d love to see a solid partnership arise between them and pull a few of the girls (Lafter, the twin-tailed pilot who looks like she could be a Planetary Gear from Captain Earth tops the list for me) into their ranks. I don’t really expect this to happen long-term, but maybe we’ll get lucky. In any case, Tekketsu easily beats out Comet Lucifer this week, both in terms of the overall episode and in terms of mecha battles. 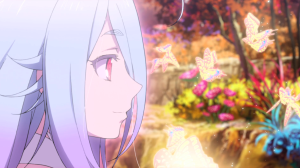 Concrete Revolutio, Episode 7: This week, we get Earth-chan, Earth’s preprogrammed dispatcher of justice. Except… does justice even really exist? And is it always right? Enter Judas—a new, provocatively named superhero teen with electric powers. A former criminal, now reformed, Judas stands as a representation of humanity’s struggle to do good (no subtlety in this naming scheme!) in the face of its tendencies to do otherwise. In particular, the sparks that fly between the robot with the fantastic character design and the once-wayward kid converge around the idea of lying (something with which the Superhuman Bureau is well-acquainted). We all have lies we tell ourselves and those around us—they’re convenient and oftentimes important to surviving. But Earth-chan is a robot. How can she understand this? The answer this time is magic, an illusion… the taste of a lie. But if lies in some form are essential to survival, where do we draw the line? 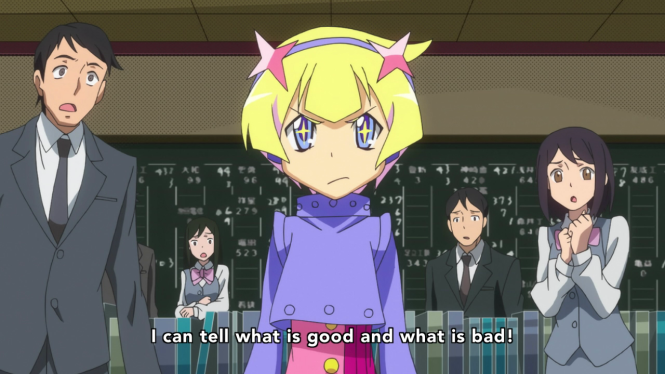 Starmyu, Episode 7: Starmyu continues to prove that it has some of the most solid fundamental of any show this season, knocking its token comedy episode out of the park this week. There was a really nice balance between character humor, situational jokes, and your normal anime tropes, which—paired with the general silliness of Starmyu‘s base character personalities, it made for a lot of fun watching (and some actual, out-loud laughs). The intensity of the last few episode was eased up a little bit, but with more and more of Hiragi and Otori’s backstories slowly being revealed, the inevitable tension is on its way fast. A lot of their relationship was expanded upon quite gracefully this episode, which moments like Hiragi volunteering to apologize for the vase and Otori stopping Hiragi from calling the police bears both demonstrating that there’s a lot more to this relationship than simple disagreement of artistic approaches. 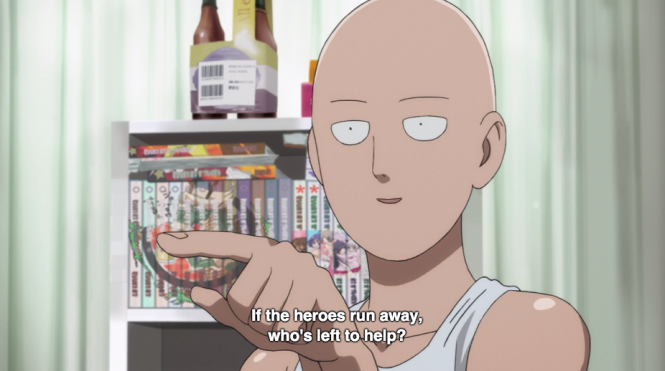