Guys, I’m going to be honest. Despite there being a number of shows I’m interested in this season, I’m not really looking forward to the return of the weekly show grind. But I’m doing it anyways, because I don’t know any other way to live. Said another way, I’m just too easily entranced by new anime stuff to stay away for long. And, perhaps more importantly, I believe in actively looking for the good anime out there, not just waiting for them to come to me.

So, here we go again. Winter 2016. Despite all my whining, there are actually a few shows I’m greatly anticipating, as well as a few shows that have already struck my fancy. So, let’s get to it. Take it away, Guppy~ 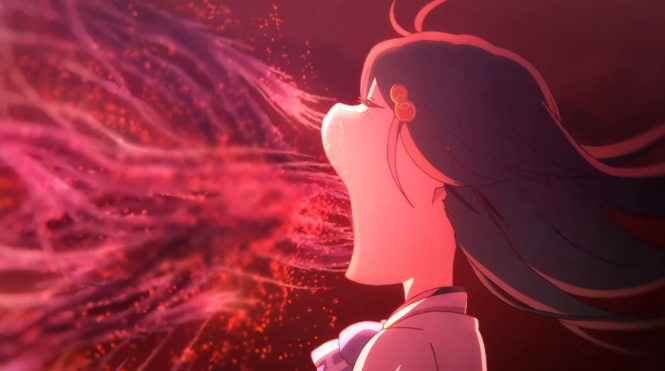 There is very little good I have to say about Phantom World. This is not a show of myriad colors; it’s a dull, lifeless adaptation. I have heard the cheers for other shows as “trashy stuff that knows it’s trash,” but for me this always seems to strike the same sour note as those shows that are “smug stuff that know they’re smug.” In short, winking at the audience about how trashy you are is no more appealing than winking at the audience about how clever you are for being self-aware of your tropes. It doesn’t help that Phantom World‘s fanservice is of the egregious variety that, as far as I’m concerned, goes so far that it fails to even be titillating. Oh, yes, that’s the point. Well, it’s not a very good point, particularly when the rest of the episode was rote, dour, and dull.

However, I am obligated to note that all is not lost. I am, for now, staying the course with Phantom World because of the genius idea someone had to create a character who’s entire schtick is based around inhaling the show’s phantom enemies: Reina, or as I have affectionately nicknamed her, Guppy. Guppy is good. Guppy is, easily, the best thing about Phantom World. When she unhinges her jaw and gulps down phantoms, I am happy.

Guppy consumes. All is well. 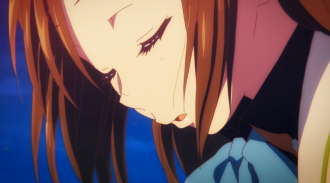 On a basic level, Haruchika does not look good. At all. The art direction is flaccid. The character designs are ugly and, to make things worse, are depressingly neutered from their beautiful novel designs. The cinematography is bland, and overall the show looks like a B-tier production from P.A. Works. Beyond that, the mystery writing was slow-paced to the point of being entirely unengaging and the characters, despite a cast of decent seiyuu (Chiaki Omigawa reappears, at long last!) and Chika as the standout, failed to come across either likable or interesting. This is a problem because mysteries generally aren’t something I’m a fan of for their own sake (as we discovered last season).

And while the twist at the end is interesting, two high schoolers rivaling each other in love for a teacher at least 12 years their senior is so entirely lame an idea (no matter what their genders may be) that I just don’t care to go on. Haruta and Chika Bloom is a great title, but this premiere gave me no confidence that the show proper will deliver on that idea.

Prince of Stride: Like Haikyuu, when Haikyuu was consistently good. Prince of Stride really isn’t a nuanced show, but it’s got a voice cast I like (hello to Kise from Kurobas‘ seiyuu, Ryouhei Kimura—and, of course, to Kana Hanazawa). I do actually like sports anime a far bit, and the otome bent and direction give it all enough a feeling of freshness to keep me interested for now. The race at the end of the premiere, in particular, was far more thrilling that I had expected it to be. Prince of Stride may very well fall off the pace in later episodes, but for now I think it got a good start right off the block.

Active Raid: Where Prince of Stride got by mostly on execution for me, Active Raid took a different, albeit more sustainable for the long-term path to being a fun watch. The show’s characters (helped along by the show’s excellent soundtrack) have an easy chemistry together that allows the show to naturally throw their dialogue at each other. Ari Oizawa as a stick-in-the-mud newbie isn’t a role I would have pegged her for myself, but she’s (as expected) charming even as a total prick. Ultimately, whether Active Raid can succeed for an entire season will rely on it A) not getting too serious, B) very carefully managing itself if it does get serious, C) maintaining the squad’s easy camaraderie, and D) doing more with its generally good character designs (I mean, geez, their faces were leaden).

We close out this first round of impressions with what appears to be the first legitimate contender for being just an outright good show, Erased. This is one of those shows that makes me itch to write about it episode-by-episode, talking about the individual moments, the strong visual direction, and the thoughtful writing that seems as if they’ll make it one of the true gems (if not the true gem) of the season. All of Erased‘s characters are immediately fascinating, its central conceit well-executed and (apparently) cleverly tied to its themes, and its mood confident without being overbearing.

In short, I’m far too impressed with this premiere to do it real justice in this short space. Go watch it for yourself, and if you’d like to see episodic write-ups of Erased here, let me know!

And that’s all we’ve got so far! Hope you’re all enjoying the new year, and the new season!