Putting words to that vague idea and (likely) wild claim that Hyouka might the best-directed TV anime of all time.

I was recently reviewing a handful of old posts on the blog, including a number of my episode blog posts on Hyouka, a project I’m still inclined to call my finest aniblogging work to date. As I did so, looking over the depth of meaning I was able to extract from the show’s visuals, a question occurred to me: “What makes Hyouka‘s cinematography so good?” Obviously, it’s possible to point out specific instances of well-executed shot framing, storyboarding, editing, and so forth, but my question was of a different, more comprehensive nature.

Yes, I was asking myself to put together an all-encompassing theory regarding the merits of Hyouka as a cinematographic work. What a fool I was. But having asked the question, an answer was required. 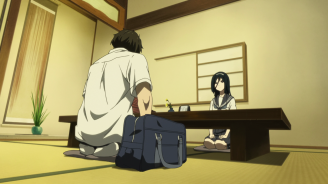 There are two parts to this answer, and the first leads into the second. This is that Hyouka, despite its dalliances with fantastical visuals, is fundamentally a show about the mundane. There are no giant robots backlit by planets; there are no stunning vistas. The materials of its execution are the stuff of non-legend. Classrooms, schools, restaurants, occasionally the countryside or a festival… Hyouka resides in the ofttimes bitterly plain world of Oreki’s gray-to-rose-colored life.

This is relevant insofar as it makes Hyouka‘s visual creativity and excellence especially impressive. The visual language of Hyouka is constructed of necessarily (by setting and, even, by theme) basic components. Its success, therefore, speaks volumes of its staff’s understanding of both the materials and, critically, the world they have been given to work with. 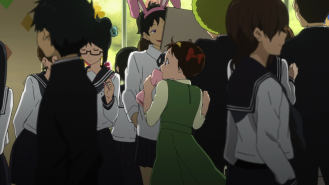 That final bit leads into the second part of the answer – the Hyouka as a show, visually conveys a deep familiarity with, understanding of, and immersion into its world. That is, Hyouka as a work of cinema achieves what is a virtually complete articulation of its thematic and emotional concerns by way of cinematographic manipulation of its world. A common phrase going around anime criticism these days is that the world of a show feels “lived-in,” which is typically used to describe background art or other mise-en-scène design elements. This is, of course, a fine thing to do, but I would argue that Hyouka takes the next step beyond this.

Hyouka‘s world is not one that feels “lived-in.” It is one that the audience truly lives in. The conceptualization of Hyouka‘s individual scenes not only as things in which the characters move, speak, and act, but also as entire worlds unto themselves sets the anime apart from others. You need only watch the way the camera flits about from angle to angle, the way the lighting shifts, the way shot composition is used, to understand that what director Yasuhiro Takemoto and the rest of his team at Kyoto Animation have done is create a physical, emotional, and thematic world through visual language. 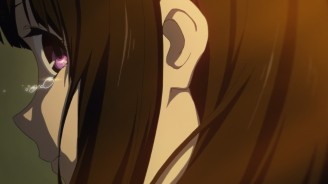 It was Oreki’s two confrontations with Irisu in the tea room that really got me thinking about this, and I think it serves as a useful example of what this means in technical terms. Those scenes are particularly interesting in construction because they occur in a room that is very like a stage in physical construction. It is a natural frame within a frame, a screen within a screen. By the roving camera in both scenes, along with the ever-shifting lighting, conceives of the room not as a place in which two anime characters are having a conversation, but a three-dimensional space, a space that is “lived in” because it has depth and dimension and is tangibly, almost tactilely inhabited by characters who have bodies and exist within the space itself.

These scenes might serve as a microcosm of Hyouka as a whole, which very well might have been yet another anime in which anime characters do anime things. And nothing would have been wrong with that, just as there is nothing inherently wrong with other anime in which the characters play across the surfaces of their worlds. But anime is anime, and as anime, you can put the “camera” wherever you wish. There is a freedom in that, that might be either unreal or viscerally, oppressively real. Hyouka, because of its cinematographic virtuosity, I think is the latter.

You haven’t answered the question, though! What makes Hyouka’s cinematography so good?

I have, I see now, unintentionally saved my thesis for last: Hyouka‘s cinematography is so good because it is expressive, to the fullest extent, of the show’s world, characters, themes, and everything else. The visual language of Hyouka, and you will have to either trust me on this or read all 22 of my analyses on the individual episodes, speaks as clearly as the show’s script – and, at times, even more so. And it does this, remarkably, frighteningly, with utmost consistency through nearly 10 hours of runtime. That it does so with materials as mundane as its setting makes this more impressive, somehow, but in the end the ultimate point is how much meaning inhabits the cinematography of the show. It is fantastic. It is rich. It may very well be the best-directed TV anime of all time… but I haven’t seen enough anime yet to make that claim for real.

8 thoughts on “By Camera, a World: Inhabiting Hyouka”