What is the nature of conquest? How does one become a conquerer? From where does the power to conquer come?

Following the conclusion of World Conquest: Zvezda Plot, these are questions that seem to follow from another: from where does Kate Hoshimiya get her powers of conquest? It’s not an answer explicitly given in the show itself; there’s no stated higher power that has blessed Kate with the ability to conquer using her shiny CGI fist. And there shouldn’t be, because Kate’s power isn’t a power that is granted from the outside. It’s a power that is inherent to her nature as a conquerer and a child. 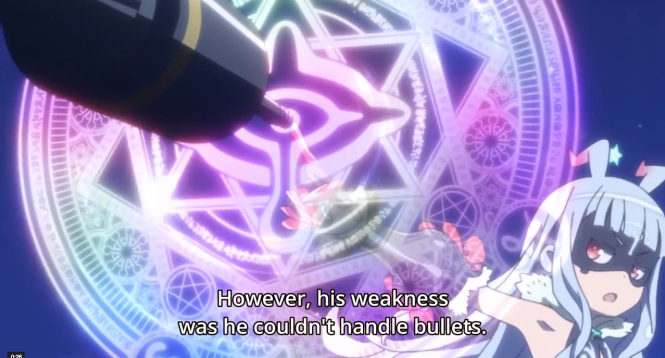 The best hint at the origin of Kate’s powers comes in episode 11, where we see that Kate is the last in line of the ancient Udogawa rulers. She is the final ruler, and Kate tells us through narration why she has the appearance of a child. “The moment I decided to conquer the world, my body stopped aging,” she says. This statement implies some sort of a causality between Kate’s decision to conquer the world and the altered state of her existence. At the instant she decides to take on the task of world conquest, Kate is locked into perpetual life as a child.

It is important to note here that the immediacy and actual occurrence of this existential change in Kate make a strong statement about the certainty and seriousness of her decision. When Kate says that she decided to conquer the world, it is a statement entirely devoid of doubt or falseness. It would perhaps even be appropriate to say that she lacks even the capacity to renege on her commitment. It is an insoluble contract with her very nature. When Kate makes the her decision, she becomes the personification of conquest and thus gains her powers.

The distinction that must be drawn is that Kate’s powers are not a effect of her decision; they are inherent to her new existence as conquerer. Kate’s ambition is simultaneous and interdependent with her powers. While I would stop short of classifying Kate and her powers as a duality in which Kate is the particle at a given moment and her powers are the wave of conquest that perpetuates outside of specific time, Kate’s acceptance of the ideal of world conquest makes her the standard bearer, the true representative. As she says in episode 12, “Ideals exist as long as people believe in them.” Kate believes, nay knows, that world conquest is possible. Thus, the ideal persists, with Kate as its incarnation.

But even this, while it perhaps explains Kate’s relationship with her powers, does not fully elucidate why Kate has her powers; in some way, yes, the how is explained by assuming that her powers are a natural part of her decision to become a conquerer. But why? Why does the decision to conquer the entire world mean that Kate inherently has powers?

My theory is that Kate’s powers are a sort of imaginative manifestation of her status as an outsider. One of the strong binaries that World Conquest draws is between adulthood (reality) and childhood (imagination). Kate, as a person who has rejected the reality of adulthood for the childish dream of conquering the world, stands outside the established system of existence. To steal a Christian phrase, Kate is in the world, but not of the world. She is from the world of children, playing at creating a new reality in a realm that is not her own. It’s somewhat difficult to express clearly my point, but the general idea of it is that she has power over the system because she stands outside of it. To use another Christian parallel (these come easier to me than other metaphors), it is similar to how God can affect time because he stands outside of it. Kate is a force, a power in herself because she has rejected the existing system. Rather than allowing herself to be subjugated by the rules and conventions (and physics) of the adult reality, Kate becomes a denizen of the imaginative sphere. And in World Conquest, where imagination and childish innocence are so strongly held up as ideals, Kate’s citizenship in that world means that she possesses the power to enforce her childish vision on the world around her.

And yet, Kate’s powers do not destroy. They modulate the existence of the things around her, a profoundly imaginative (although not necessarily creative) method. Kate does not rule through fear or power, but through conversion. In the first episode, when Kate stops the tank shells and defeats the brigade, everything

she beats bears the mark “Conquered.” Kate appropriates reality to her own desires, much like how children will see a tree as a monster (done this myself back in the day) or a rock as a Pokéball (this one, as well). And because the rules of the world in World Conquest grant imagination the ability to affect the real world, Kate, holder of the greatest of the childhood dreams, possess the power to make her ambition into the actual state of the world around her.

In all this, Kate truly is an outsider. Despite the assembly of generals she has around her, she stands alone, for such is the nature of the conquest and being a conquerer. Kate may convert the things around her to her side (the reappearance of the tank brigade in the final episode bears this out), but the reality of conquest is that the conquer is superior to the conquered. In fact, the tangled web of familial relationships that play out in World Conquest reinforce this. While the

Chief, Plamya, Asuta, Renge, and even Yase, to an extent, are connected to people all on all sides of the battle, Kate stands above it all. She’s thousands of years old, trapped in the body of a child, and she is entirely unconnected to the people who fight on her behalf and against her. She must. And it’s implied that Kate may indeed understand this. She tells Asuta in the final episode that she wants to conquer the world by talking to every person in it, a profoundly childlike and innocent desire that demonstrates just how far away she truly is. Unlike Asuta, Kate has no family, only conquered friends, and so she seeks to make the entire world her family. This isn’t to dismiss the validity or authenticity of Kate’s relationships with the rest of Zvezda, but the fact remains that they exist as aids towards her goal.

Asuta stands as the lone exception, because Kate is unable to conquer him as she has the rest. It is no wonder, then, that she values his companionship and assistance so much. Asuta, also, has somewhat rejected the reality of adulthood and joined Kate in the realm of childhood. Asuta is not there to the extent that Kate is (shown by his ability to activate Galaktika without being able to control its powers), but he is on his way.

All this is to, once again, demonstrate that Kate is indeed an outsider to the established system. She’s a child, yet thousands of years old. And she wants to conquer the world. Kate really is an ideal incarnated; as she says, she didn’t want to be stuck as a child, but that’s is what she must be. She’s a child of her own imagination, with the powers to see her dream become a reality. It’s the greatest of imaginative games, played out in the real world in World Conquest: Zvezda Plot.