Another week of the worst advertisement for a product ever: “Play WIXOSS! There’s no way to win and if you lose, your life is ruined forever!”

Nisekoi, Episode 18: Fanservice is boring to me, ergo the first part of the episode was really dull for me. It’s over-saturation, at best, and it left me pretty cold moving on into the rest of the episode. I actually generally like Nisekoi when the whole gang is together (like the fast food restaurant scene), but the jokes got shafted (heh) for the sake of letting the audience ogle the girls and so I was not entertained. On the relationship front, Onodera actually made a move and I panicked. I really did, even though I knew it wasn’t going to have any effect. Instead, we got more Chitoge progress, but in a pretty heart-wrenching way. This episode was the most transparent we’ve seen Chitoge the entire show, and Raku (not unjustifiably) just missed. I was actually surprised at how much emotional resonance was in the end of the conversation scene and in the classroom scene after the credits. They’ll make up (but probably not make out…) before the show ends in two weeks. Obligatory Chitoge gallery (I easily filled my quota, even dodging all the fanservice shots). Thanks, SHAFT!

Mekaku City Actors, Episode 5: At long last, five episodes in, Mekaku City Actors finally found something that could be called its stride. The humor was there early and often (the slow motion phone with the music, Marry’s poems, Marry repeating Kisagari’s introduction…), the dialogue actually seemed to have some life, and people started moving around. Episode 5 also did a good job of raising some questions that could actually propel the plot forward. I’m convinced that with some good editing and some reorganization of the episodes, Mekaku could actually be a fairly good show. It’s not right now, but I have a lot more hope for it going forward than I did last week. (In case you were wondering, here’s how I would have done the episodes: 2+3 condensed into one episode, 1, 5, 4.) One final note: I initially misread the episode title as “Kaien Panzerfest.” I don’t know what a panzerfest might be, but it sounds awesome. 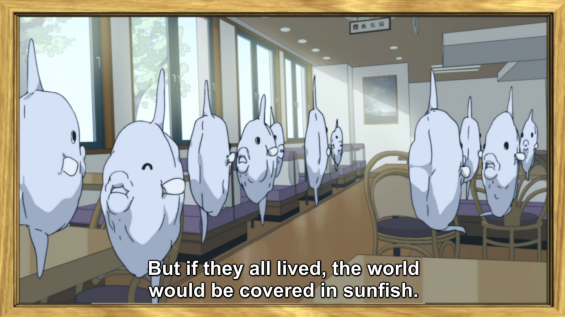 There’s a joke about global warming in there somewhere…

Captain Earth, Episode 6: It seems the parent-child relationship theme isn’t just limited to our protagonists, but also includes the Planetary Gears, as well. I’m more convinced than ever now that Daichi x Hana and Teppei x Akari are our endgames, and I’m very much okay with that. I’ve been hoping against a love triangle since I first saw the ED animation, and while I’m not sure that it won’t happen, I feel better with each passing episode. Teppei and Akari have been getting a lot of time together, and the attraction between Daichi and Hana is on the verge of becoming extremely obvious to everyone, if it isn’t already. Perhaps the most interesting thing for me was the final clarification of the politics on Earth: GLOBE is the general space organization, with the Ark and Intercept Factions existing independently organizationally, but needing GLOBE’s resources. I especially appreciated Tsutomu’s display of emotion at the end of the episode, as well as his open admittance that he isn’t really sure what to do. He’s doing the best he can, but all he’s got is four kids. I hope we get further elaboration on his character, because I think he is a good one. Put on hold for post-airing marathon. 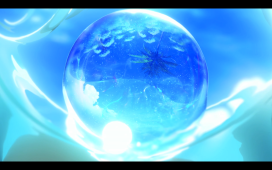 I forget, am I watching a BONES show or a P.A. Works show?

Haikyuu!!, Episode 6: There’s never really a whole lot to say about this show, but I wanted to just take a moment this week to send my love to the unabashed straightforwardness of Haikyuu!! It’s just guts, fun and volleyball. It’s a triumph of execution and energy and I love it for all of that. There really is good character work going on here, and I look forward to watching this show every week. Kageyama’s freakish abilities push the boundaries of reality, but it’s not as ridiculous as, say, Kuroko’s Basketball, so I’m okay with everything that’s going on.

Tonari no Seki-kun, Episode 19: I have only one response to this episode.

The World is Still Beautiful, Episode 6: I wasn’t going to write on this episode, but then that ending happened and I realized exactly why I’m struggling with The World is Still Beautiful: the show can’t hold tone to save its life. It dashes between serious, comedic, dramatic, light-hearted with abandon, often hitting multiple tones within the same scene. It makes it very difficult to take anything the show does seriously, and yet there are moments that could be very touching. The problem is that when you jump from jokes into people baring their hearts to each other, it feels a bit…stilted or fake. Luna’s “involvement” in the plot (really, this was just a one-off episode to show how great Nike is) provided the perfect microcosm for this larger problem, undermining her final moments on screen, which should have been a bittersweet and emotional scene in which she learns to let her love go, with her immediately prior abuse of Nike. It really is a shame, because I like the sentimentality of this show and the main relationship, but the tonal schizophrenia makes it hard to invest.

One Week Friends, Episode 6: An absurdly cute episode from One Week Friends this week, one that was closer to your typical cute kids with friends moeblob than I’ve seen this show go. But One Week Friends has been doing a lot of heavy dramatic lifting up to this point, and so I’m totally okay with it coasting for a week on good feelings, laughs and smiles. I do hope that this isn’t all the show becomes, because the ability of One Week Friends to take on those dramatic moments with delicacy is what separates this show from generic cutesy friendship shows. That being said, this episode dropped us some backstory courtesy of Kaori’s über moe mother, but it didn’t really give us (or Hase) any more clues about Kaori’s condition. It seems the only thing he can do is solider on as he has been. Saki and Shogo continue to be excellent additions to the cast (Saki’s VA is doing great work on the absentminded, almost Katie-like delivery), and the show as a whole keeps marching on as a testament to the philosophy that sometimes “less is more.”

What? Not all teenage boys are sex-starved animals? Some are capable of restraint?

Hunter x Hunter, Episode 129: Just Hunter x Hunter doing Hunter x Hunter. This episode was basically all set-up for the final stages of the arc, and yet was still better than climax episodes of most anything else. Pouf is on the ropes, fighting a losing battle. He left Komugi alone to go after the Gungi board, which means she’s still alive for the King to see. Even worse, he tipped his hand to Killua, who now knows that she’s both important to the King and someone Pouf wants to kill. Killua will figure it out eventually. Gon only gets two lines this episode, but holy crap, what lines. He and Pitou are entirely divorced from the conflict at the palace now. Another long week of waiting ahead…

CHAIKAAAAAAAAAA, Episode 6: Yeah, I’m not letting you out of the top spot of my APR yet. I won’t aruge that Chaika is the best show of the season, but it’s running away with the top spot on my favorites list. And that means a lot to me. I’m starting to wonder, with Fox Boy’s supposition that ALL the Chaikas are real, if this remains gathering thing isn’t some sort of Queen’s Blade-esque (no, I have not watched that show) competition to see which Chaika is to become the late emperor’s successor. What ever the answer to the mystery be, I love watching every minute of this show. It’s smart, funny, and really well executed. Running away as my top show of the season; and with my heart.

Ping Pong, Episode 6: Kong singing karaoke with his team runs away with heartwarming moment of the week. Yeah, and that’s in a week where I didn’t skip an episode of One Week Friends. To be honest, this episode didn’t work quite as well for me as the last one did, and I think it mostly comes from Peco’s scenes. I’m just not sure I bought his sudden turn around. For Ping Pong, which has been ever so careful at showing the motions that move people between stages of their lives, Peco almost “drowning” in the shallows was the closest to typical anime tropes that I’ve seen Ping Pong go and I can’t really say I was a fan. But, however it happened, Peco’s back in the game (like, literally the game), joining Kong and Akuma as someone who has hit the bottom of their respective arc and come back. Smile, whether he realizes it or not, isn’t happy, and Kazama is so obsessed with…well, is it even ping pong that he’s obsessed with? Whatever it is, it’s all Kazama sees, and he’s hurting the people around him now because of it. The lessons keep piling up, but it seems that Ping Pong, despite the title, might actually not be about ping pong at all…not that it’s really any surprise.

Who says this show can’t be beautiful?