Sure, there are some problems with this show, starting with the characters. But, it’s time to stop pretending that the sense of foreboding each episode creates isn’t a noteworthy feat in itself. Some shows do things better than other shows, and selector infected WIXOSS does a great job of controlling atmosphere each week, and has been doing it since the very first episode. Creating an appropriate atmosphere for your show isn’t enough to make a show great on its own, but it’s foolish to disregard a show’s good traits because not all of its parts are of equal quality. 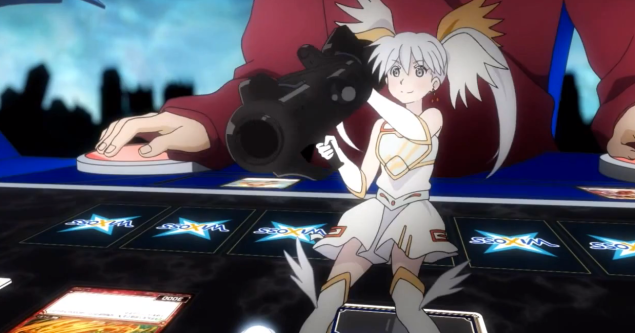 With toys like that, no wonder Tama likes to battle.

Along with the atmosphere, I’m really liking WIXOSS‘s use of sound each week. The sound effects, especially, go hand-in-hand with creating the oppressive atmosphere and some of the music, like during Ruko and Iona’s battle, is actually pretty cool stuff. 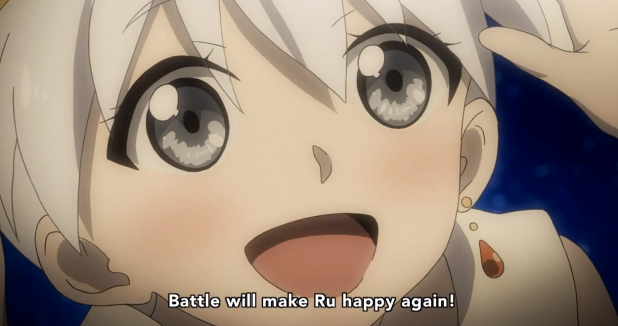 Battle Will Make You Happy: Everyone knows it now, but Tama’s known it from the very beginning. She’s an expression of Ruko’s personality, the eager demon looking for happiness in the sheer adrenaline rush of fighting with someone else.

Iona & Uris: Like Ruko and Tama, Iona and Uris are a perfect pair. Iona has shown, on occasion, a rather sadistic personality, but here she lets Uris do almost all the talking. Uris is just as eager for battle as Iona, so Iona allows her to goad, prod and attack potential opponents. I’m still suspicious of the LRIGs’ own motives, because they still don’t seem like simple tools at the beck and call of their Selectors. 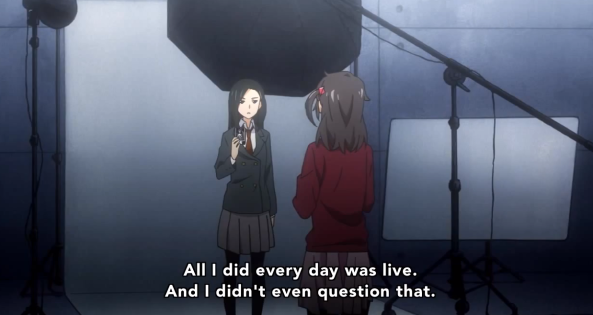 I Didn’t Question Living: What? As if living isn’t enough on its own? This is a pretty telling statement. WIXOSS isn’t just a hobby or a game to Iona; it’s her life. WIXOSS has replaced “just living” for her. Now that she’s found she can’t live for the sake of living, because WIXOSS is just that much better. Call it subtle marketing, but this is a pretty devastating message.

But…You’ll Have to Suffer: Man, what a way to frame that statement. “But…you’ll have to suffer…” It doesn’t even sound as if it’s a big deal; Ruko says it as if it’s only a minor reservation. She’s sucked in, and she doesn’t even know it. Is her wish, contrary to all the times she’s said, “I have to stop the battles,” to keep battling and battling, forever? 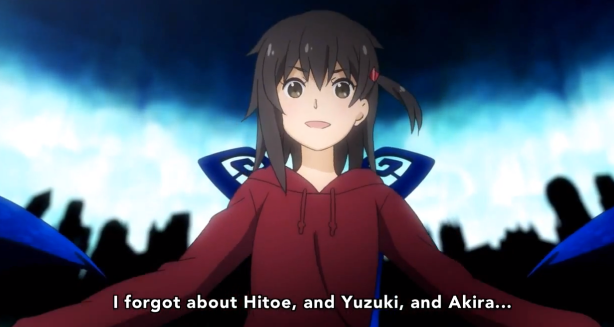 I Forgot About The Others: Of course you did! The quest to be the Eternal Girl (the eternally battling girl?) is, by nature, a quest that excludes other people. It’s selfish game for selfish people with selfish wishes, built on crushing the wishes of others.

With that being said, perhaps to be the Eternal Girl isn’t something you can achieve by winning innumerable games. Perhaps it’s a state of being, a condition in which you can continue to battle and battle, forever.

Yuzuki’s Eyes: I could be reading into this too much, but those are distant eyes. Those are the eyes of someone who has forgotten what they were fighting for. I wouldn’t be at all surprised to find that Yuzuki is becoming another victim of the game’s addictive properties. Forget achieving your goal, the process of achieving your goal can become a goal in itself.

People were praising this episode to me, but I honestly can’t figure out why. Maybe it was the cool-looking battle with cool music, but this episode wasn’t significantly better than the general level of the show (I’m excluding the obviously bad parts). In the end, I do think WIXOSS is doing more things right than it is doing wrong, but I don’t think it’s exceptional as a whole. It’s doing fantastic stuff with atmosphere, good stuff with sound, and maintaining a pretty solid balance between raising questions and avoiding audience frustration. The mystery of what’s really going on behind the scenes is enough to keep me interested at a surface level, even if I can’t really bring myself to care about any of the characters.