Ah, man. I cried a lot watching this episode. It started with Shogo throwing the towel in Hase’s face in one of the best reactions to a PDA I’ve ever seen, and then came the walk…but we’ll get there. Brains Base is doing fantastic work on One Week Friends, but this episode took things a step farther. The writing and direction continue to be excellent, and really the whole package of this show amounts to what Kotoura-san could have been. Parts of this episode started to remind me of Toradora! and comparing anything to my third favorite anime of all time is a huge compliment. So, about this episode….

“Oh, a beach episode? Seen one, seen them all.”
How wrong I was…

Hase has some work to do with himself, because he’s having major problems admitting to anyone, including himself, how he really feels about Fujimiya. We just saw this kind of attitude burn Nisekoi‘s Chitoge a few episodes back, and Hase needs to get over this if things are going to change. I liked the little recap of their relationship. It was a nice little reminder of all the time they’ve spent together up to this point. Fujimiya’s at a point where thinking about Hase is as natural to her as breathing, but she’s too inexperienced to know what she’s doing is an expression of love of the purest kind.

I loved this moment, as they departed in silence. All that needed to be said had been said, and so they said no more.

I do think it’s important to note here that it’s Saki, not Hase who essentially saves the day with her vacant unawareness of her surroundings. She wants to play, and she ropes in Fujimiya to play with her, avoiding the trip turning into a total disaster. Hase may be the main supportive force behind Fujimiya, but he can’t do it all by himself.

I also think the moment when Hase goes to get Saki’s ball (and comes back soaked) is an important one. This is who Hase is. He’s a genuinely good person, one who willingly sacrifices comfort and his own feelings for other people. It also serves as a balancing moment: for all the times Hase has supported Fujimiya, he doesn’t necessarily get a ton of support back. But it’s Fujimiya who cheers Hase up, and the romantic tension in the air is so obvious that Shogo cuts in with the aforementioned towel throw.

Ah, crane games, the eternal battlefield on which young men fight to impress their ladies. This is Hase’s style. He wants to impress Fujimiya, to be noticed by her, but he doesn’t quite have the confidence to do it outright, so instead he does it in a supportive, understated way. It makes sense, then, that his attempts fail as Shogo proves to be luckier (more talented?). Hase really does love Fujimiya–more on that later–but he’s going to have to make it clear to her eventually.

The photo booth is a great moment for Fujimiya. To this point, all she’s had has been words. I’m a writer, and words are great, but being able to actually see the faces of those people she is trying to remember as friends will hopefully go a long ways towards improving her situation. 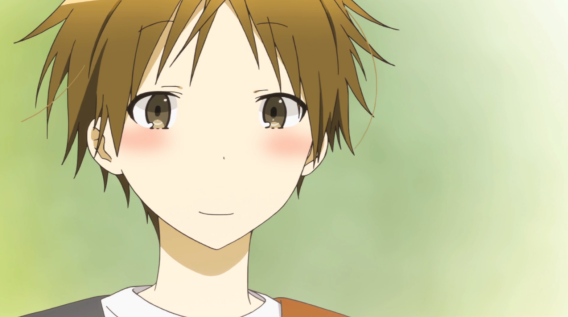 You think these shots of Hase watching Fujimiya are just to show how moe he is? Wrong. These moments, especially in this episode, are critical in establishing just how far he’s fallen in love with this girl. It’s a wonderful little bit of delicate visual storytelling.

Rock-Paper-Scissors, the perfect expression of Hase’s innocent personality. I don’t know why he suggested it (his odds for being the one to be with Fujimiya were bad), but that’s how Hase thinks. Splitting Hase and Fujimiya up for a bit allowed for a nice bit of exploration from the ever tactless Saki and the perceptive Shogo. Saki basically finds out what we already know, but again, we see Hase unable to openly admit his feelings for Fujimiya. It’s silly, because all his actions say that he cares for her more than just as a friend (thus why its so obvious to everyone else), but it may be that Hase himself doesn’t realize that Fujimiya lacks the knowledge to understand what he actions mean. Or, at least, she can’t articulate what they mean to her, even if she knows something is a little different.

Hase can’t even return Fujimiya’s smile to him when she returns. He’s really fallen for her, and I’m sure he is struggling to deal with the intensity of those feelings.

This is where it happened. The set-up, with Shogo telling Hase what he’s probably starting to realize himself, that he needs to push more if he wants things to change. And as soon as Fujimiya asked Hase to go on a walk with her, something flipped in my brain. Backed by Brains Base’s gorgeous backgrounds, everything Fujimiya was saying sounded like metaphors to me. She lists a whole bunch of things she likes, and each time she said, “I like the ocean” or “I like the rain,” I couldn’t help but hear what she was actually saying: “I love Hase.” And, yes, the tears were rolling and continued to roll. 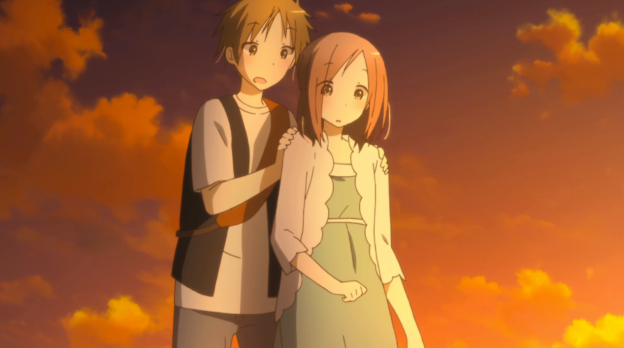 And then the wave came, and Hase (of course) catches Fujimiya. Of course he’s there; he always is. This is how things are for him, and this is what love is: it’s the way that Hase is there to support Fujimiya, to catch her whenever she needs him. Again, he can’t handle his own feelings, but it’s so instinctive for him to be there for Fujimiya. There’s simply nothing else he can do.

Fireworks and the End

What a lovely metaphor for what Hase has been doing this whole time for Fujimiya. Sharing the flame? That’s exactly it. That’s what Hase does for Fujimiya. He stands behind her, supports her, loves her, and his light has illuminated hers. I was remembering here just what a cold presence Fujimiya was initially, but she’s been lit up like a candle, and now she’s a warm, loving presence. All that has been facilitated through and by Hase taking the first step over and over, and never stopping to take the step after that. He may not have been entirely unselfish, but the love he’s show Fujimiya has radically changed her life.

Fujimiya’s final line of the episode, “Lately, I’ve wanted to use the word ‘like,’” actually felt a bit heavy handed and unnecessary to me after all the times she used it to obvious effect in the episode, but it’s still an expression of how she’s been changed. She’s open now, able to love, and even if she doesn’t know exactly what that means, it doesn’t change the fact that Hase was the one who enabled her to be like this and Hase is the one she loves for that reason. 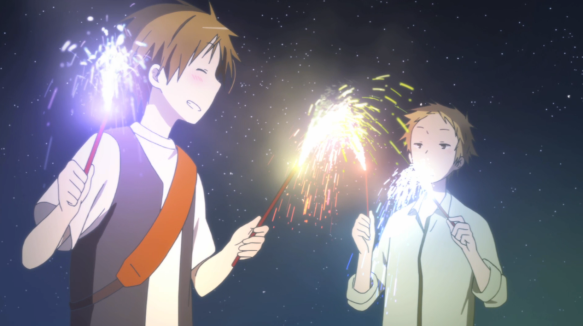 Brains Base showed this episode that your studio doesn’t have to be named P.A. Works to put out absolutely gorgeous background art. And the wonderful thing about the art in this episode was how crucially intertwined it was with the story and the characters at the time. It’s one thing to watch the love flow between Hase and Fujimiya and it’s another to see pretty background pictures, but put them together…

“A beautiful thing ought not to be spoken of in any but a beautiful manner.”

That really sums up why I thought the art was so effective this episode. It was in perfect unison with the story of the show, and so they worked together to a beautiful effect.

It looks like we get another character next week, presumably Fujimiya’s old friend, so drama should be incoming, but I’m certain it will be a beautifully rendered story. This show is doing so much right every week, and its already proved it can handle drama sensitively. I’ll be looking forward to next Sunday.