It’s kind of crazy to think that I was still in England when this season started. Where I am now, both as an anime watcher and and blogger, seems quite far away from where I was then. It was a good season, though—one that saw my entry into Reddit, the start up of an ambitious Best Girl tournament on the Crunchyroll forums and my first steps into the aniblogger world. But about that anime…. I picked up a lot more shows than I wanted to actually watch, discovered a new show that I really like (Love Live!), was let down by numerous shows, dropped way more shows than I usually do, was charmed by Chaika and wowed by my first Masaaski Yuasa show. So, yeah. Spring 2014 wasn’t a bad season for me. I won’t say some shows didn’t become tedious at times, but overall it was a pretty good season, with Week 8 (headlined by Hunter x Hunter, of course) standing head and shoulders above all the rest. Here’s how things shook out.

As the difference in ratings demonstrates, Ping Pong was the best anime of Spring 2014 by a long shot, short pips. With as many anime that struggle to tell a complete story in 13, or even 26 episodes, Ping Pong just goes to show that you can tell a story of any length well if you know what you’re doing. As top shows do, Ping Pong is taking home a large swath of the awards for the season, none of which are more true than Kong Wenge bringing in the Best Male Character award. I mean, he sang karaoke. (Full review of Ping Pong)

Up through episode 8 One Week Friends looked like it was going to pull out an 8/10, but the final arc just wasn’t able to conjure the emotional investment of episodes 4 or 8. That’s okay, though. One Week Friends turned out to be a heart-warming show about friendship and doing the hard work necessary to have friends. It shone in the little moments, in the small looks and phrases of its characters. On the awards side, the OP animation was simply gorgeous, and the song was probably the most perfect match for the tone of the show of any opening theme. (Episode 8 Write-Up, Episode 9 Write-Up)

Ah, Chaika. How I love thee! Chaika was something of a pocket show, a comfort food show. I pretty much knew I was going to like it from the start, and then was pleasantly surprised to find out just how much I ended up liking it. The run of episode 5-7, which were totally dorky and weird, I loved. Throw in the actual best action sequences of the entire seasons in a fun fantasy setting—and how could I forget Chaika’s facial expressions?—and you’ve got my personal favorite show of the season. (Chaika Gif Collection)

Tonari no Seki-kun is 3A because 1) it ended in the middle of the season, and 2) I forgot about it when I first typed out the rankings list and I didn’t want to re-number every show. But, anyways. Tonari no Seki-kun is an incredible show. It’s comedic genius in 7 minutes, and the fact that it managed to be hilarious for 21 broadcast weeks in a row without growing stale speaks to the quality of the formula and the creativity behind each and every scenario. Throw in what was one of the best Kana Hanazawa performances she’s ever done, and you’ve got yourself a winner.

Other than Ping Pong, no other show did more with less this season that WIXOSS. After a solid first episode and then an abysmal run of episodes at the beginning of the show, WIXOSS stabilized and then just got better and better as the season wore on. As evidenced by the number of episodic posts I did on it, WIXOSS left me with a lot to think about. The second season has a lot of work to do in tying up loose narrative and thematic strands, but I think Mari Okada can do it. Then again, Nagi no Asukara took a nose dive in its second cour…I’m just hoping the kinks got worked out early on in WIXOSS, for the betterment of the whole show. (Episode 1 Write-Up, Episode 7 Write-Up, Episode 10 Write-Up, Episode 11 Write-Up, Episode 12 Write-Up)

In sheer exuberance, no show this season matched Haikyuu!! And no show matched the production values, either. Haikyuu!! looks great, and there are numerous truly spectacular animation sequences that dot the show. It’s nothing new or innovative on the story front, but it’s an enjoyable, energetic watch each and every week. It doesn’t steer too far into angst, and it works to keep itself rooted in reality. It’s just some kids having fun playing volleyball, and we get to watch them. And that’s not supposed to sound sad.

Hi. We play volleyball. It is a chill sport.

A late pick-up for me, and one that I wasn’t sure I’d like, Love Live! 2 turned out to be a new favorite of mine. It’s unrestrained positivity almost the whole way through, and even if my suspension of disbelief was shattered watching the musically superior A-RISE (c’mon, “Shocking Party” was the best song in the entire season) be defeated and an entire school show up to shovel the entire city, I found Love Live! 2 a refreshing watch because of that positivity. Love Live! 2 absolutely believes in the goodness of humanity, and we surely can use more of that in the world. (First Impressions of Love Live! 2) 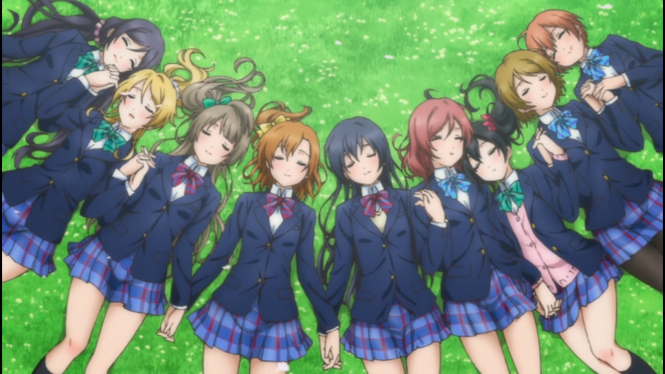 An amazing lead couple in one of the most genuine and authentic displays of romance to have ever graced my laptop screen is held back a bit by a weak middle, but the show ended strong. Sometimes, you just have to take the best you can get and be happy with it and when shows like The World is Still Beautiful are at their best in character relationships, that’s always going to be a reason to watch. Nike was a fantastic character throughout andRena Maeda was spectacular as her VA—get this girl more roles! (Full Review of The World is Still Beautiful)

Solidly entertaining, very pretty. The harem itself was okay, but the supporting cast behind the main duo (yes, I mean Raku and Chitoge—Onodera is a big pile of boring) was quality. I liked Nisekoi and I’ll watch more when it inevitably comes out, but I’m not pretending this was anything more than pandering entertainment. It’s nice to be pandered to, sometimes. (Full Review of Nisekoi)

What can I say about this show that I haven’t already? Wasted potential in the extreme, SHAFT liking being SHAFT a bit too much. And Kana Asumi rocking it out as the best character in the entire anime. Ene’s episodes were far and away the best part of the show; not great enough to merit watching the whole show for them—but the whole experience of Mekaku City Actors is so disjointed that anyone could probably watch them and have the same positive experience of them that I did. (Full Review of Mekaku City Actors)

Pleasant, endearing, easily-digestible and ultimately somewhat forgettable. Unlike comparable shows like Non Non Biyori and Kiniro Mosaic, Is the Order a Rabbit? was neither funny enough or existentially relaxing enough to merit a great deal of affection from me, but I’ll watch the next show that comes out like this. And the one after that. Because, even though I don’t like coffee that much, I can still appreciate the smell.

We’ve all been there, Rize…

“I’m a Steph,” while it has reached meme level in the wider anime culture, just isn’t a great of a line as, “Dammit, Marco!” No Game No Life was fun, I’ll admit. But between abusing Steph right and left (people find this crap funny?) and the in-your-face fanservice, No Game No Life just overwhelmed a lot of my tolerances. It may sound hypocritical coming from a blogger who mostly liked Nisekoi, but just because I like being pandered to sometimes doesn’t mean I can’t tell when a show is trying to manipulate me. And I tend to get stubborn when I feel I’m being toyed with.

Black Bullet‘s biggest problem was that I realized early on that I couldn’t take the show seriously, and yet it still kept insisting that I should take it seriously. The cute moments were great and some of the dramatic moments were great (mostly the Enju-centric ones). And then sometimes the anime descended to Mahouka like levels of just…what? Probably the only thing that is keeping Black Bullet in 5/10 territory, and just barely, is that I found Enju somewhat compelling and enjoyed the mostly refreshing relationship between her and Rentaro. Now if we could stop writing ten-year-olds that try to work their sexuality on high schoolers…

I can’t be the only person who was thinking about Shu Ouma here, right?

Not as fun, not as well-produced as the first iteration of the franchise. First time I’ve ever seen a show where the obvious lack of production values truly damaged my experience. Add in tepid and listless pacing and bad direction and you’ve got yourself a show that is only a shadow of its former self. It’s unfortunate I’m already 175 episodes emotionally invested and always expecting the “next episode will be better!” Now, I’m probably just going to put up with whatever the show throws my way hoping against hope that it will clamber out of the muck it’s in.

Boring, politically controversial, far too uptight for its own good. I did get a lot of good laughs out of the bad writing in the first cour, but you can only laugh at bad things for so long before you start to feel sad. Mahouka makes me feel sad, so I’m dropping it, onii-sama.