Well, Zankyou no Terror leaned a bit more on dialogue this week than it did last week, and it showed, because episode 2 was neither as intense or as interesting as the premiere. That being said, this is still an chilling piece of work and Watanabe and company are doing an excellent job of laying out their foundation. Even if parts of it feel a little unoriginal, Zankyou no Terror is still the best currently airing show right now (EXECTUTION, PEOPLE), and I don’t see that changing soon. 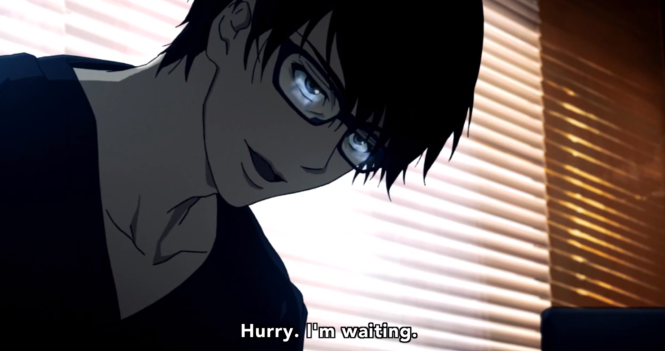 The first thing I want to talk about, though, has nothing to do with the actual episode itself, but instead with a moment I noticed in the OP song. I don’t know whether to give the credit for this brilliant juxtaposition to whoever was in charge of directing to the OP or to the subbers who did this episode, but whoever it was…this is good stuff.

I was cruising along, listening to the beautiful OP song and watching the animation sequence when I noticed this lyric on the bottom of my screen: “Because your smile is like that of an angel.” I looked up at the image playing at the moment, and was pleasantly surprised to see Twelve smiling, looking a little bit moe and backed by a bright light. Then, with the lyric still being sung and still on the screen, the shot shifted to a much creepier shot of Twelve—still smiling, but through the sickly green hue of a security camera and looking anything but angelic. It was a powerful moment when the irony struck me, and I think (from what we’ve seen so far) this is probably going to be the defining point of Twelve’s personality—seemingly innocent and bright, but hiding a grim darkness behind that mask.

If Zankyou no Terror did one thing this episode, it convinced me that I like the main trio much better than I like any of the police officers, including Shibasaki, the guy who answers Sphinx’s riddle too late. The sad fact of the matter is that none of the adult scrambling to catch up to Nine and Twelve’s acts of terrorism are as compelling as the teens (especially Lisa, who I came to really like this episode—although I liked her last episode, too). The police, mostly, are just guys doing their jobs, and while I can respect that…they just don’t make for very interesting television. We already know their motivations: they want to stop the bombings. None of the police really stood out as interesting characters in their own right, so I’m hoping this focus on them was a one-time thing.

We did, however, get to see Lisa’s obsessive mother this episode and the economy of the scene meant that they really didn’t need to spend that much time. Lisa’s father, it seems, left the family and now Lisa’s mother is terrified that her daughter will do the same. For a teen (the age when kids naturally try to break a little more free of their parents), this isn’t a great turn of events and Lisa’s mom looks to be more than just worried. She’s certainly not thinking about Lisa, only about herself. I suspect this dynamic is going to persist throughout the show as Lisa inevitably becomes more involved with Nine and Twelve. Seeking refuge from an awful family situation by keeping company with terrorists? What great choices Lisa Mashima has been given… 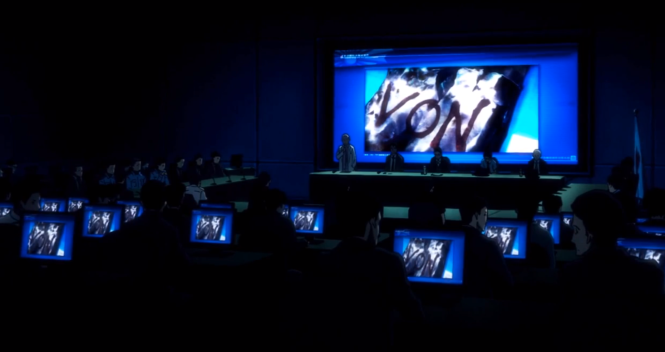 VON everywhere. A nice visual way of demonstrating just how heavily this news weighs on everyone there.

To be honest, I was too wrapped up in the episode to remember to take screencaps. One piece I do remember, though, is the extreme casualness with which Nine and Twelve decide who is going to take the bomb to the police station. Twelve starts the game, appropriately for his happy-go-lucky persona, but Nine jumps in right at the end as if they’ve done this time and time again. The irony is pretty strong here, enhanced by the somewhat anime-archetypal shot of Nine  on the motorcycle immediately after losing, looking a bit annoyed, as if he’s been charged with running an inconvenient errand.

This lighthearted-dark (remember that OP) shows up again when Twelve meets Lisa in the bookstore. Lisa’s clearly taken at least some interest in the two of them, as she’s reading the story of Oedipus, and Twelve messes around with her a little bit with the Mentos Green Tea Cola joke.

At first, I thought it was just a cute moment (and it was a cute moment!) showing that these two kids are just that—kids. Ha! I should have been looking for it, but Zankyou no Terror got me good on that one. When Lisa finally catches up to Twelve out on the street, what he says to her completely recontextualizes the encounter. He wasn’t just playing, he was bullying her.

I suspected last episode that Twelve’s devotion to Nine might be little bit more than just the bond of friends, and this scene bore that out. Nine and Twelve are a duo and in Twelve’s mind, there’s no room for another member. He doesn’t accept Lisa; he only tolerates her because Nine does. [I don’t think this will happen, but how intense would a stormy romance between Lisa and Nine be?] This is the darkness hidden under the guise of an angel, and it may reveal a lot about Twelve’s motivations. He may not even care for the terrorist attacks other than as a casual diversion—it could be that he’s simply there to back up Twelve. Then the question becomes, why Twelve? What debt does Twelve owe to Nine to purchase such exclusionary loyalty? P.S. In case you didn’t believe me when I said the police were boring, just look at who I spent 900 words writing about—the teens. Even with minimal screentime, they are by far the more compelling set of characters.

6 thoughts on “Zankyou no Terror, Episode 2”