I’ll be working on a full review (or maybe more of a reflection) of the show for later on, but I need to get my Haruhi reflection out of my head so I don’t end up just saying the same things all over again. But anyways, let’s talk about this explosive (sorry) finale to what I think I probably consider the finest show of the season. And Zankyou no Terror was a fine show—a thoughtful and sensitive show, realistic without being handcuffed by reality, a bit cynical without being hopeless. 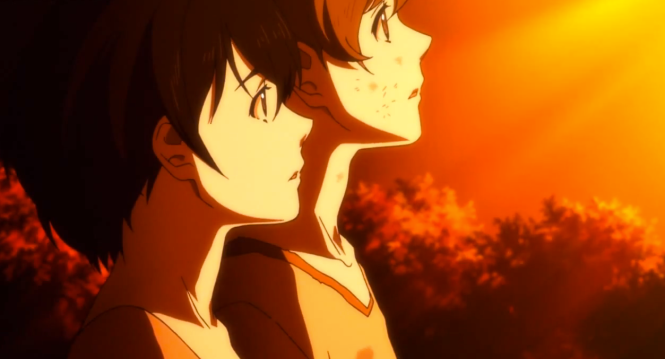 It says a lot about how brief Twelve’s appearance in the last episode really was that when he appeared at the beginning of this one, I had completely forgotten why he was so banged up. Obviously, I figured it out after a bit of thought, but I’m grateful that Zankyou no Terror returned to that moment later on in the episode. Lisa’s reaction to Twelve’s appearance is as expected—she’s worried, but thankful he’s safe—but I found it more significant that, while everyone else in the city is evacuating, it’s as if the thought has never crossed her mind. At this point in the game, Lisa is totally committed to Sphinx, even as she wonders is being so will result in death.

Twelve says some important stuff to Lisa as they wait for the bomb to explode, the most important thing being his statement about being needed. “Neither of us was needed by anyone before,” he tells her. “I’m glad I met you.” This is one side of the theme on which Zankyou no Terror reflects—to be needed is to be known, but more importantly, it is to be able to love. That’s why, for all the shipping jokes that have been made about Twelve x Lisa, I say that they did love each other, and Nine too. Not romantically; despite Zankyou‘s occasional inclinations towards romanticization at times, it is focused on the more essential need to be known. But that’s a line of thought for another piece. 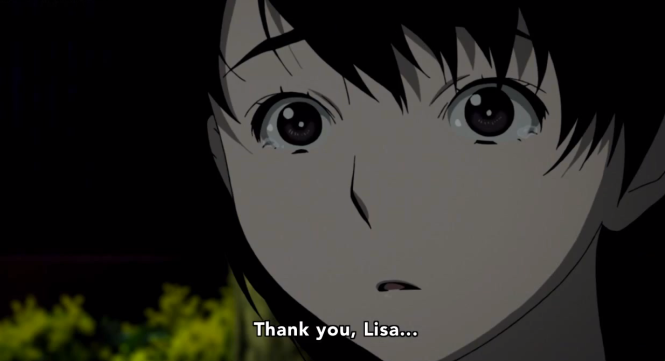 The drama of the bomb’s detonation, from Shibasaki’s call to his daughter to Hamura realizing how the bomb would get up into the sky to the frantic response of the government to the jets being unable to follow the bomb, was well-executed, but ultimately (for me at least) secondary to the actual explosion and its aftermath.

But, of course! This is it! This is what the entire show has been building towards, the final motion by Twelve and Nine, the final shout, the final desperate call—one that will scar the world with their memory. And when they’ve done that, all that’s left to do is to retire quietly away and wait to the place where it all began.

The sequence we see of Nine, Twelve, and Lisa at their hometown after the explosion probably is the most melancholy scene of the entire show. It contrasts splendidly with the intense intimacy of the ferris wheel bomb scene—that was a scene for grown-ups, while is is a moment for children. Last week I was lamenting the great tragedy of Zankyou; that is, the loss of childhood and innocence. But for a few wordless minutes we are privileged to see Nine and Twelve return to their childhood and bring Lisa with them.

But childhood doesn’t last forever. Eventually, you have to become an adult, and for Nine and Twelve that means taking responsibility for the destruction they’ve caused. So when Shibasaki shows up to arrest them, they’re ready to go. Not only has this been what they’ve planned for from the start, but they had the beautiful chance to touch the joy and freedom that had been denied to them for so long, even if it was just for an afternoon. 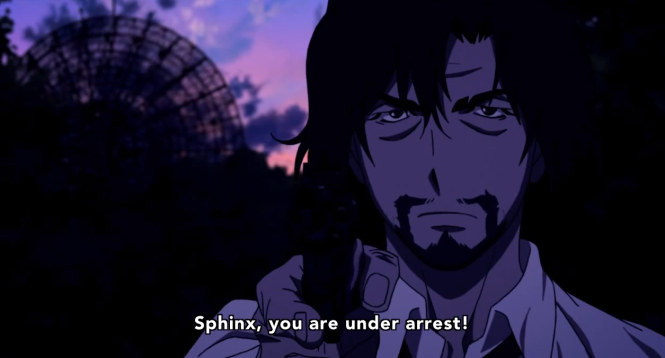 As for the very ending, in which Twelve is shot down by the American forces to cover up Five’s outrageous behavior (Screw you, America!) and Nine passes away from the effects of the Athena Plan experiments, I was happy with the way it ended. Yes, I know I pleaded, begged even, for a happy ending, but it just wasn’t going to happen here. To be honest, part of me is glad they perished there, rather than being locked up for life for their crimes. And, thankfully, Zankyou no Terror presented these deaths, especially Twelve’s, in what I thought was about the least sensationalized manner possible. It wasn’t gory. It was just simple. There was a matter of fact attitude in the way he was shot that seemed to say not, “SHOCKING,” but simply “This is how things are.”

And that, I think for this conclusion to this show, is the thing I loved the most. I’ll talk about Nine’s final request to Shibasaki on behalf of himself and Twelve in my upcoming piece on the show, but it was the calm manner in which every thing wrapped up that sold the finale for me. It’s as Lisa says, “I gradually got used to it, and a year passed in the blink of an eye.” Life goes on. Dirait-on. 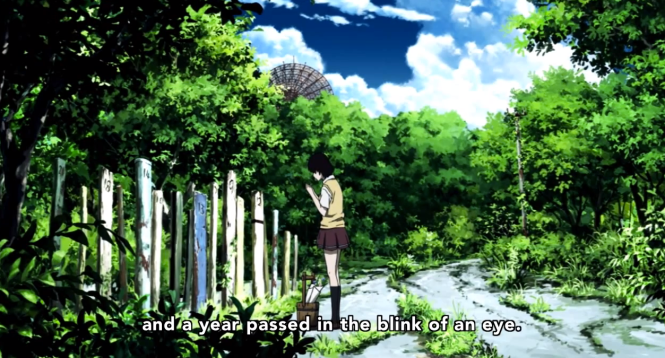 For his part, I loved Shibasaki in the final scene with him and Lisa. His offer to her, “If anything happens, come talk to me anytime,” is beautiful, kind, and generous. And his final words, the concluding line of the entire show, “Yeah, be well,” is…it’s just… It’s not quite Zankyou no Terror, with all its bombast and gigantic emotions and resonating statements, but then it is.

An encompassing wish. A prayer for the present and the future. And all this set against the background of a trickling stream in a lush, green land. VON means hope, and I think for all its bitterness and anger, Zankyou no Terror believes in a future, in a world, with all its impulses to block people out and grind people down and use people up, that can be well. 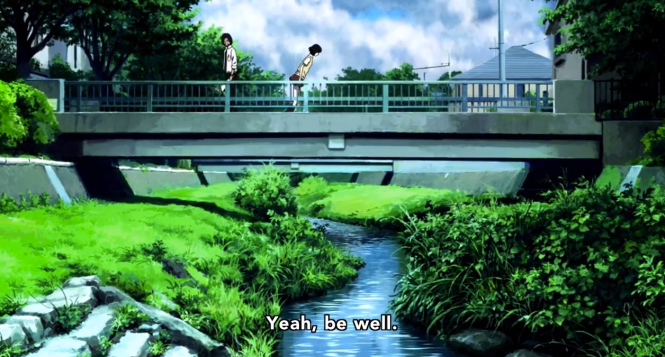