So, I know this is of concern to people—the name Dead Monday no longer technically applies to Monday like it did last season, because I have Bahamut AND Inou Battle to watch on Mondays. (Sundays are actually my no shows day, now that I’ve dropped Sora no Method.) But, fortunately, I have a great new reason to keep the Q&A on Dead Monday, and that is in honor of Bahamut‘s wonderful lolizombie, Rita, voiced by the wonderful Miyuki Sawashiro. She may techinically be undead, but I mean, c’mon, she can control zombie dragons!

Ahem. Anyways, about those questions. As always, thanks to everyone who asked—and if you missed out, you can still ask (anonymously, if you so choose) on my ask.fm! 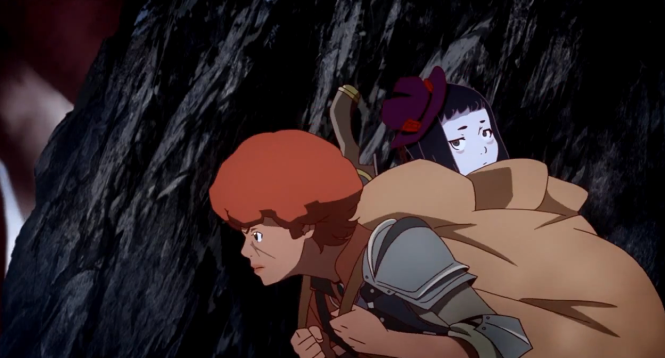 Always package your lolizombies with care.

Q: What do you think initially appealed to you in Garo that made you prefer it to Bahamut? Do you still feel that way or are they about even now?

I think it was less about what Garo was doing and more about what I felt Bahamut wasn’t doing. Although I thought the first episode of Garo was very provocative (in a good way) and the generally functional father-son relationship between Germàn and Leòn really appealed to me, Bahamut was just falling short for me.

Nowadays, I do like Bahamut more. Episodes 3 & 4 did a lot for my investment by giving me the backstories for Farvaro and Kaiser, which helped my engagement with all the crazy, overblown fun stuff that was happening. Garo, on the other hand, has felt to me like its moving too slowly plot-wise & I also don’t think it’s done nearly as much with its characters since the first episode as Bahamut has. I still enjoy Garo for its general vibe, awesome OP, and father-son dynamic, but the episodes 3-5 haven’t had the momentum that the first two did. Bahamut, on the other hand, keeps getting better and better.

I expect Bahamut to keep being a favorite of mine. We’ll see if Ema’s reappearance in Garo on Friday is enough to give the show a new shot of energy.

Q: What themes do find resonate particularly strongly with you in anime?

Family. Making the most of the present. Taking action and responsibility for your own life, and not relying on “fate.” True expressions of real love. Overcoming the weight of the past, whether that be guilt, mistakes, or tragedy. The inherent goodness of humanity and its capacity to love. Coming to terms with yourself and your place in the universe. Making yourself into a better person. Hope. The importance of joy. The value of kindness. Passionately pursing a single goal.

It might be illuminating to know that in answering this question, I just went to my top anime list and scanned through those shows and compiled a list of the main themes that stuck out to me from them. It’s pretty much just the same few things over and over again, which really isn’t all that surprising. What’s even less surprising is the synergy a LOT of these themes have with each other.

Q: I know you didn’t enjoy watching Aldnoah Zero, but did you have fun talking about it with others afterwards at least?

Oh my gosh, yes! The collective outpouring of rage/disbelief on Twitter was an absolute blast, mocking all the Slaine-haters behind my hand was fun, and watching new thread after new thread pop up about A/Z on the CR forums was entertaining, if a bit annoying. The Slaine memes were pretty entertaining, and although the all the Slaine hate was annoyingly misplaced (imo), the overall storm was a lot of fun to be a part of, at least initially. I did tire of talking about it pretty quickly.

I remember specifically that ‎Frog_kun and I had a great vent session about the ending (although he’s a filthy Inaho fan :P).

Q: What is your favourite season and why?

Spring is the best season because 1) it means freaking Winter is ovvvveerr, 2) it’s still somewhat cool, so you can still wear scarves and pants and over types of fashion that I like, 3) it leads into the second-best season, summer, and 4) because everything is coming back to life and the air smells great and the sun shines and it’s altogether wonderful.

And here’s the start of my custom-made ask.fm Visual Novel: “I’d also copypaste the paragraphs into your answer for neatness sakes.”

Apparently, ask.fm has now turned into a personalized visual novel for me:

“You wake in a daze. A scant few foggy images are all you can recall of the last three days. Your head is spinning, and there is a numbing ache in your right arm. You have a vague idea you just woke from an important dream. You are in a room, filled with stacked bookshelves. Beams of sunlight poke in from a shuttered window to your left. Your phone lies beside you, battery dead. Do you: A – Check the window to see where you are B – Look for a phone charger, while whining about your arm D – Scan the shelves for a decent book to read E – Go back to sleep for a bit, hoping this is the dream.”

If you want to see what happens next, here are the links to the second and third parts of the VN.

I’ll be back tomorrow with Highlights of the Week, and after Wednesday (when I finally clear out my backlog of academic papers), I’m hoping to start pumping out some more Utena posts. See you guys around!