Well, that was maybe a little more of Yun’s backstory than we needed—but it did a really fine job of setting up a few more contrasts and bringing back the theism-atheism theme that seems like it’s going to be a fundamental part of the show going forward. And man, Yona‘s just so dang good at working the dualisms that we humans live with every day. God or no God? Selflessness or selfishness?

Probably my favorite development in Yona as a character right now is the fact that she’s really thinking—I talked last week about how she’s aware of her ignorance (something Yun doesn’t recognize yet). I don’t mean that she’s constantly meditating on her lack of knowledge, but that she’s trying to best use the knowledge she has to make good choices and try and learn more. Her early interactions with Yun and Ik-su are really revealing of how hard Yona’s trying right now. Effort isn’t everything, of course, but you have to start somewhere, and the actions Yona’s taking to try and become a stronger, better person are really admirable.

It’s pretty clear that Yona has a good idea of how to handle Yun—she doesn’t respond to his jabs at her status and she’s free with her admiration of his skills. While Ik-su’s reliant on Yun, Yona actually treats him with unreserved kindness and treats him like an equal. I especially liked the moment when she crouched down in front of him to listen as he was talking. It was a simple gesture (that flustered Yun), but I think it was indicative of the way that Yona’s learning to treat people and her desire to understand where they’re coming from.

All that would be moot, though, if she wasn’t able to utilize that understanding. However, her conversation with Ik-su in the barn demonstrated that Yona is indeed capable of thinking of others in a genuinely empathetic way. From all her conversations with Yun, she’s understood his true feelings—that he really loves Ik-su—and so she acts on Yun’s behalf to say the things he can’t say. “I don’t want to pull a family apart,” she says, a perfectly understandable sentiment coming from someone who’s family has been destroyed. Having lost it herself, she wants to preserve what she can for other people—just like she did with the Wind Tribe. And so, she restores the choice to Yun. It’s a really great moment for her character because this is a different kind of strength than the ability to fight or the capacity to make decisions for herself. This is a healing strength that reaches out to others and pulls them up.

I also really loved the small murmur she gave as acknowledgement to Ik-su’s compliment about her clothes, allowing him to move on to Yun immediately. She could have made a big deal out of it, or blushed, or reacted in numerous other ways, but instead she just smiles and takes the compliment gracefully.

I really like how Ik-su’s eyes are usually covered, but when he’s serious they piece through his bangs like magenta jewels. They show up a lot more in this episode than they have in the past few, mostly when he’s talking to Yun. Ik-su might be an airhead and a crybaby, but at the end of the day he really cares about Yun and is willing to act like the adult he is for Yun’s sake.

Pretty much the rest of the episode is about Yun, and it’s basically a subtle revelation of what makes him tick: a thirst for knowledge. While Yun touts himself as a “genuis,” it’s his desire to learn that sets him apart—a desire he’s restrained all this time for the sake of his love for Ik-su. His conflict is, essentially, between his desire to be selfless and to be selfish. Hak drops a bombshell line on Yun, which actually reads as ironic to me because Hak and Yun are essentially doing the exact same thing for Yona and Ik-su, respectively. They’ve both selflessly committed themselves to helping another without regards to their own desires. Yun doesn’t weigh his own life against Ik-su’s; he does everything out of love. And it seems like that realization helps Yun understand the dilemma he’s in: being selfless versus being selfish. 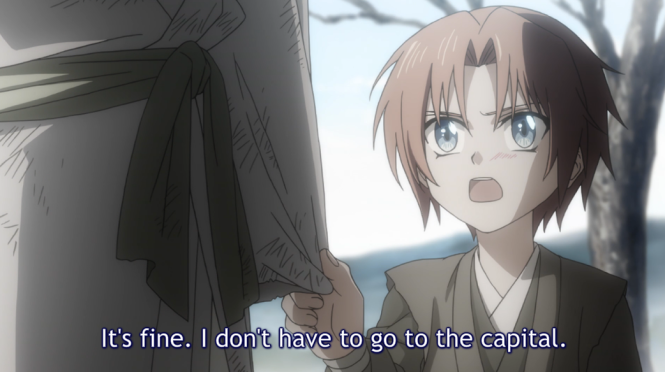 This is what launches the episode into the (long) flashback of Yun’s childhood and meeting with Ik-su. Again, what we see here is basically just the story of a poor kid desiring to learn and flourish in a harsh world. He’s given a ray of hope that he can be more than just a thief, more than just a lonely child, and he clings to it. He wants to be more than he is. Ik-su shows him that he can do just that by being selfless.

Yun’s love of knowledge also explains why he dislikes Yona. She’s ignorant—she lacks the thing he cherishes most in the world, and right now he’s not capable of seeing what we know about her and her desire to know more.

We also get the religion thing cropping up again here with child Yun’s disbelief in God clashing against the pure honest kindness of the priest. And, in the final scene of the episode, Yun more or less expresses that he’s been converted by the power of Ik-su’s belief-powered love. I don’t think this is Yona‘s definitive statement in the thematic debate it seems to want to hold—just a piece of the puzzle.

The greatest and final gift that Ik-su gives to Yun is the chance to be selfish for the first time in his life. I doubt this is the end of Yun’s growth. For all of this, he’s still just a kid eager to impress others and be useful, but, like Yona, he’s got a genuinely good heart that will anchor him through the rest of his journey.

I’m glad that next episode is titled, “Shaking Resolve.” Yona’s really developed and been able to shine since she made the choice to leave the Wind Tribe, but both Capital Fuuga and Ik-su’s house have been safe bubbles for her to grow within. Now that they’re really heading out into the hostile world, it makes sense that Yona should experience some growing pains. But she’s got a strong foundation on which she can build, so I’m confident she’ll triumph over whatever external or internal obstacles cross her path.

3 thoughts on “Akatsuki no Yona, Episode 8”