Well, I’m on break from school, but that also means I’m back to my part time job, so fitting in blogging around that is going to mean a few less timely posts than before. Ah, the irony that being on break is going to interfere more with my blogging schedule than being at school. Something about not be able to control your own schedule is so…lovely.

Thank you for this gem, Argevollen.

Your Lie in April, Episode 10: Best episode of the season, right here.

YuYuYu, Episode 10: This week’s episode wasn’t as emotionally devastating as last week’s, but for a reveal episode, it was plenty powerful. There were some legitimately chilling scenes in this episode: Togo’s first attempt at suicide, the image of the swarming Vertexes beyond the wall, the terrifying imagery of Sonoko in bed surrounded by charms and a shrine. The revelation that Togo was Wasshi before she lost her memories wasn’t particularly surprising, but the structure of this episode…cutting away from the aftermath of Fu’s rampage to Togo’s cheery flashback and then slowly morphing back into the dark universe we’ve instinctively understood this world to be was powerful. I’ll wait until next week to judge whether or not Togo’s decision to destroy the Shinju-sama was a good one—I just hope it isn’t one that will result in our real hero’s (Yuna’s) demise.

Shirobako, Episode 10: Man, they’re really laying on the whole “find your dream” thing heavy, aren’t they? Between Shizuka and Honda and Misa, everyone seems to be tackling the same internal problem, albeit in different ways. It’s really interesting then, to contrast their struggles and decisions with the wild behavior of the Director, who, after all this time dragging his feet, seems like a totally different man…until he starts drinking. Is that what it means to have found your dream? If so, it’s kind of a weird place to end up. I’m hoping they think about incorporating that end of the dreams reflections into the rest of the story. I’m also enjoy that Shirobako now has an Amagi Brilliant Park-esque timer counting down the days until the delivery of the final episode. You can do it, Aoi! 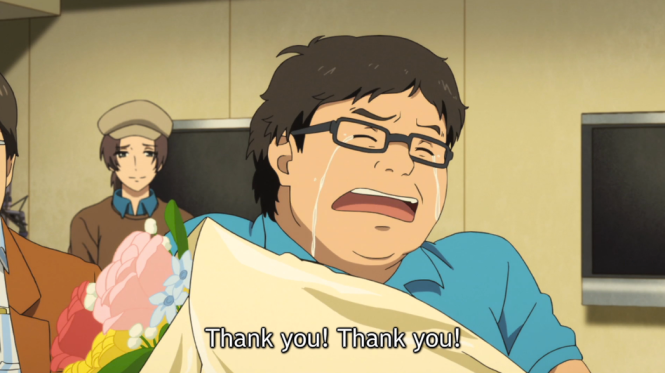 The director is more moe than anyone else in this show. Except maybe Honda.

Argevollen, Episode 23: It’s almost over and the stage is set for one heck of an awesome finale. The political maneuvering of Cybernes and radical egotism of Cayenne have fallen before the force of Samonji’s selfish will, and as he heads out to what will most likely be his final battle, the people who care most about him are racing to stop him. The story has now progressed to a place where the action sequences hold a lot more pain, as each Arandas mech that falls before Samonji guides him closer to self-destruction. Holmes is ready to do much the same thing, except without risking his life. As for what the finale will bring, I’m worried about Jamie’s survival. A few weeks ago I finally paused the OP to see what was written on the stone, and it reads: “To Tokimune—I still have some words I couldn’t tell you. That…” It could be Reika, but I fear it could be Jamie. Either way, I’m pumped for what will certainly be a superb ending to a really solid show.

Inou Battle, Episode 11: Well, Hatoko’s more or less been totally trashed by this show’s creative decisions. She’s lost pretty much everything that made her an interesting, unique, and non-justanotherprettyfaceinlovewiththeMC character. So that’s great. In better news, HOLY COW TOMOYO UPPING HER BEST GIRL CREDS LIKE NOBODY’S BUSINESS.