Man, this was a weird episode for KimiUso. For something like this to follow the beauty of episode 10 and the solidity of episode 11…it was like an entirely different show, even from what I felt were the weaker episodes at the beginning of the first cour. While KimiUso has always struggle with executing its comedy and doing so in a manner that didn’t interrupt the flow of the episode, this episode was an almost shocking departure from the general level of competency KimiUso typically exhibits—the flow, simply, was horrid.

Of course, annoyingly, it’s pretty darn hard to show through screenshots the way this episode jumped frenetically between tones and styles—and even within individual scenes the pacing of the lines was really weird. But, because I can’t really get it across otherwise, here’s an example from really early on in the episode:

These are consecutive lines and shots. In the first one, we get a more cartoony face from Kaori as she stubbornly refuses to change the song. This is pretty typical brash and confident Kaori comedy for the show—she makes these types of faces and says these kinds of childish, selfish things all the time. Then we jump into the second shot and Risa Taneda’s voice very noticeably modulates from teasing into a reassuring, confident tone. Now, this second line is pretty typical Kaori, too—she’s just as likely to reassure and comfort Kousei through her confidence as she is to bully him. In other words, we get two “normal” KimiUso moments in quick succession.

The problem is that these two types of KimiUso moments differ radically in tone. The first is playful, intended to be more comedic, while the second is a more serious moment between the two of them. In a show going just for laughs, this kind of tonal dissonance often works well, but KimiUso wants us to take the second serious—to believe that Kaori can be bratty one moment and kindly encouraging in the very next. This isn’t so much a character problem. I totally can buy Kaori flipping between these two personalities of hers. What I can’t buy is the way KimiUso tries to completely divide them, using Risa Taneda’s versatile acting and the cartoony art. And this happens all throughout the episode.

Not even the OP manages to fully escape this feeling of disconnect. While the pastel colors remain the same and while the song is nice, this OP sequence desperately lacks the impressive sonic-visual unity “Hikaru Nara” and the first OP’s animation had. I don’t think it would be an exaggeration to say that every single cut from the first OP felt as if it was perfectly, uniquely tailored to Goosehouse’s lovely song. The visuals embraced and moved with the music in a way the second OP’s just don’t. It’s a nice song and there are some decadently beautiful things to see, but they don’t absorb and enhance each other.

This all may be a bit unfair—”Hikaru Nara” was a singularly impressive experience as an OP, but I can’t help but miss the way the first OP understood the unity of sound and sight. For a show like KimiUso, one that relies so heavily on music and the ways we interact with it, having that kind of resonance in the OP seemed important. But it’s gone now. And maybe it was just the overall clunkiness of this episode, coming out now as backlash on the OP. Maybe I’ll learn to like it more. But it will never be “Hikaru Nara.” 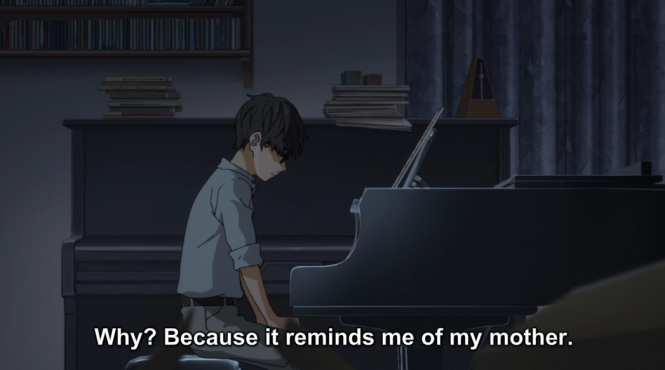 Another place where I felt the episode disconnected was in its treatment of Kousei’s continuing distress over his mother. Now, it makes sense that he would be conflicted about playing a piece that gives him fond memories of his mother when most of his feelings towards her are negative, but we also were given to assume that he had some sort of breakthrough in episode 10—not that these issues would just be gone because of one concert, but that there would be some sort of movement. Instead, it feels as if we’ve regressed into a sort of emotional suspension where Kousei has both moved on from his anger and guilt and is still tortured by them. Again, yes, I know he feelings are conflicted and unresolved. But narratively I’m struggling to follow the emotional logic between episode 10’s breakthrough and this episode’s oscillating treatment of their relationship.

Things are even further complicated by Kousei’s conversation with Hiroko at the festival, as she provides what I think was poorly chosen and unnecessary perspective on how Kousei’s mother felt about him screaming that he wanted her to die. To take a situation we’ve been given to see as both abusive on the mother’s part and horribly painful on Kousei’s and to try and retroactively frame it as the moment his mother saw him “grow up as a pianist and a person“? That not only makes no sense, but almost trivializes the significance of the encounter. “Sure, you screamed that you wanted your mom dead and then she died, leaving you guilt ridden for years, but that’s all okay because that was the moment you grew up.” No, no, no, no, no. That’s not acceptable, KimiUso. That’s irresponsible and dishonest.

Skipping over the also tonally schizophrenic and kind of uncomfortable meeting of Kousei and Kaori’s parents—and the weird fact that he biked her home, then she walked him “to the street”—who the hell is Kashiwagi-san, why is she suddenly hanging out with this group, and why is she in the OP? I’m all for adding in new characters (assuming their good ones), but Kashiwagi is dropped into the fireworks scene as if she’s been here all along. Which, you know…she hasn’t.

The pool scene itself was, again, all over the place, sometimes presenting us with serious KimiUso and comedy KimiUso IN THE SAME FRAME. Like, seriously? What is going on here? Part of me feels like this is just a really misguided attempt to adapt every single panel from the original manga at the expense of any pretense or attempt at presenting a coherent narrative line. Like the moment that Kousei and Watari get booted into the pool? First, we have Kousei wistfully thinking about Kaori and Watari look good together; then, Tsubaki freaks out at him; then, they get dumped in the pool. Seriousness, and then the act of them falling into the pool is framed as comedy, but…

SUDDENLY EVERYTHING IS SERIOUS. 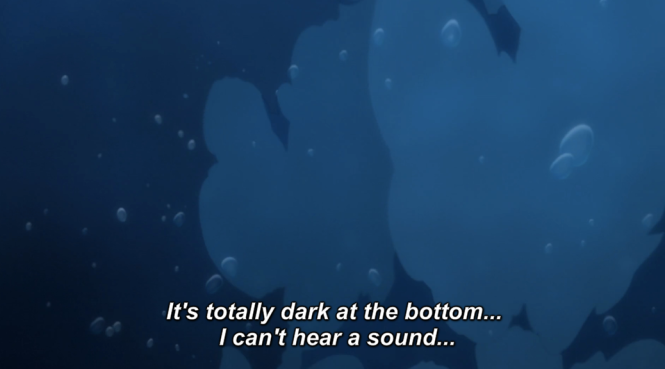 This is not how you do a dramatic moment, KimiUso. You don’t frame everything immediately prior as “hilarious” comedy and then decide to have your protagonist go into (another) contemplative monologue about his trauma and lingering feelings of regret about his mother. What is even more baffling is that KimiUso KNOWS BETTER. We’ve seen it do fantastic moments of impactful drama in many different places (not just in episode 10), so what gives here?

Along with that is the totally messed up insinuation that the result of Kousei’s trauma—not being able to hear the notes—is somehow a gift from his mother? WHAT THE HELL. This isn’t even an adaptation problem. This is one heckuva an about face by Naoshi Arakawa, suddenly deciding that he wants to go in an entirely different direction with Kousei’s trauma.

The end of the episode (aside from totally wrecking everything that was good about Emi by suddenly making her a blushing idiot) was actually pretty solid stuff. Kousei going out in place of Kaori to defend her against the bratty little kid backstage is a great moment, but by the time I got there I was pretty baffled by the episode and it kind of fell on deaf ears. 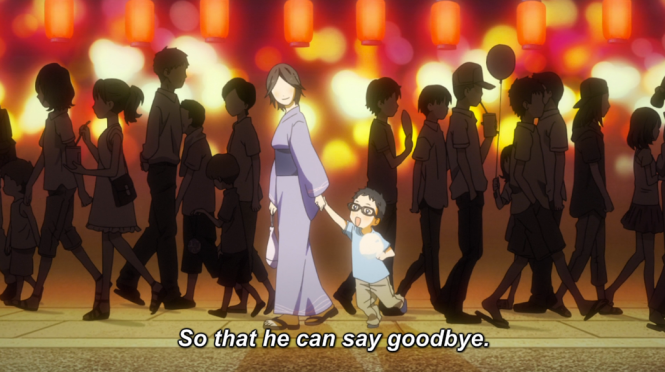 Yet, despite all those complaints, I’m still pretty invested in KimiUso. You won’t see me dropping it anytime soon. I like the characters all quite a lot, the show still looks beautiful, and I want to see where it’s going to go next. At the very least, when KimiUso screws up, it does so in a way that allows me to write almost 1400 words on it. Those aren’t your typical light novel adaptation flaws. There’s no lack of ambition in this show, and I want to be there the next time it knocks it out of the park.