Let it never be said that Akatsuki no Yona can’t do cliffhangers when it wants to do them. I thought last week’s cliffhanger was bad. HA! Laughable! Child’s play! The easiest of easy modes compared to the cliffhanger Akatsuki no Yona dropped on us this week! I almost don’t want to review the other events of this episode and just talking about that, but I’m sure if I tried to do that now it would come out as a blast of incoherent ramblings—so let’s see what this episode had for us. 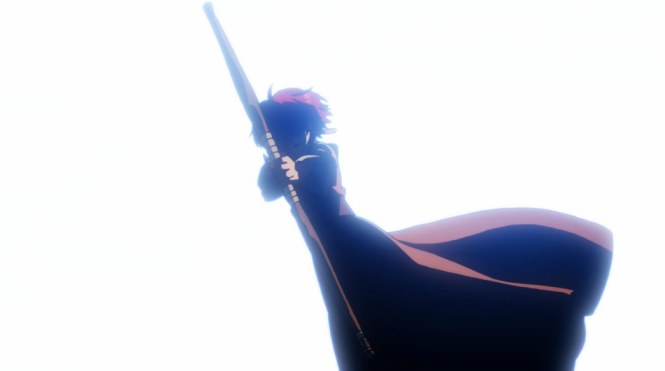 From the moment the firework launched, as if signaling changes in the stars it mimics, Akatsuki no Yona turned into a different show. You can see it in the way Hak strains towards the princess too far away for him to reach. You can see it in the defiant glare Yona gives Kumji’s officers even after being thrown to the ground. You can see it in Yun totally forsaking his own welfare in his desperation to protect Yona. You can see it as Jaeha looks more dragon-like than ever before when he comes to save Yona, no more a charming ladies’ man—the monstrous, mythical beast that sleeps inside him has been awakened. In her unwavering quest to change herself, Yona has ended up changing the people around her, too. You know what we call that? We call it power, or strength.

Sure, Yona fired only a single arrow, but this was an arrow shot in defense of others (including Jaeha). Which got me thinking. All along, Yona’s refrain has been that she wants to protect Hak, protect her other friends. Never once have we heard her express a desire to protect herself, except as it relates to keeping others safe. The scene she has with Yun immediately after Jaeha appears is, I think, indicative of this. Yona’s strength doesn’t simply reside in physical prowess, but in the ways she’s learned and trained herself to think about other people. The princess who once thought only of herself has become truly selfless: she fights for others, worries about others, protects others. Which why I really liked what she said to Yun as he’s beating himself up over not being able to protect her. “You really are a genius,” she smiles at him—and that line tells Yun it’s okay that he’s not Hak and not Ki-ja. Yun did what he could do, and that was more than enough. 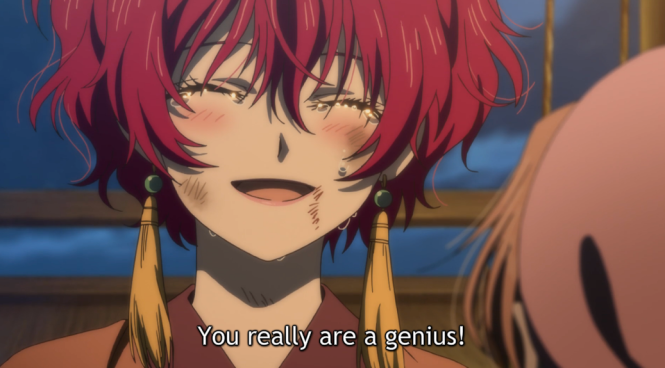 I should also note that I have nothing but praise for the execution of this episode. Although we didn’t get action on the level of episode 6’s sakuga fight, the editing was dynamic and energetic, complementing well the bursts of animation we got. Pierrot really does deserve a lot of credit for the quality of Yona‘s production—even when we’ve had episodes without much animation, the show looks consistently good and the animation we do get (like in this episode) is crisp and conveys the motion of the fighting characters nicely. And most of the more interpretive creative choices have been excellent, like the grating sound effect overlaid across the shot of Yona realizing that Kumji is going to escape.

And then, of course, there was the beautifully done sequence of the Yona’s shot at Kumji. Yona seems to revel in juxtaposing Kumji’s vision of past Yona with the reality of who she is now, an understanding nowhere better expressed than Kumji’s line “She’s just a little girl” contrasted with the striking image of a Yona prepared to shoot him down. Once again, Kumji reflects on the princess he glimpsed through the window at the palace, the first OP recalling the first half of the show. I especially loved the black and white still shots we got immediately after Yona fires, with the final shot of Kumji falling into the ocean gradually fading back into color. 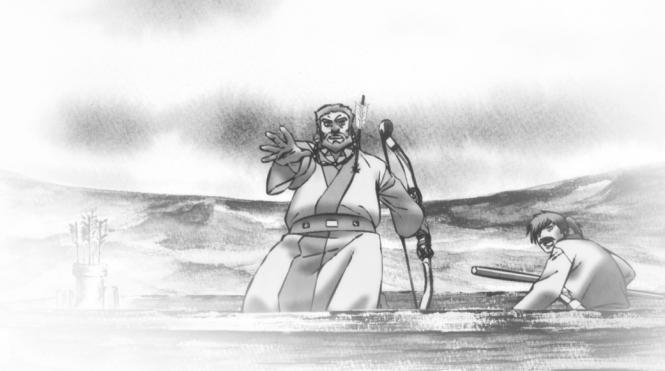 But perhaps the most impactful moment in that sequence is when Yona looks up at the sky and recalls her father, the man who hated violence to the point of taking on pain himself to prevent it. And it’s to King Il that Yona directs her plaintive refrain: “Father, have I become stronger?” The answer lies in Hak’s eyes as he stares at the Yona who can know shoot to kill and kill to protect—Yona is strong beyond all the strengths she’s shown up to this point. She has the power to save the people she wants to save.

But what will she do with this power? Su-won’s appearance in the killer cliffhanger is the incarnation of this question. Will Yona seek revenge for her father? Will she choose another path? Coming on the heels of Yona’s reflections about her father, the man who killed her father appears before her—and his appearance will demand she give answers. The light in the center of her eye fades out as she recognizes his voice, but they don’t go completely blank. I think the old Yona would have been left in total shock, but this is the new Yona. Su-won’s presence before her is yet another chance for her to demonstrate the power she’s been cultivating within herself. 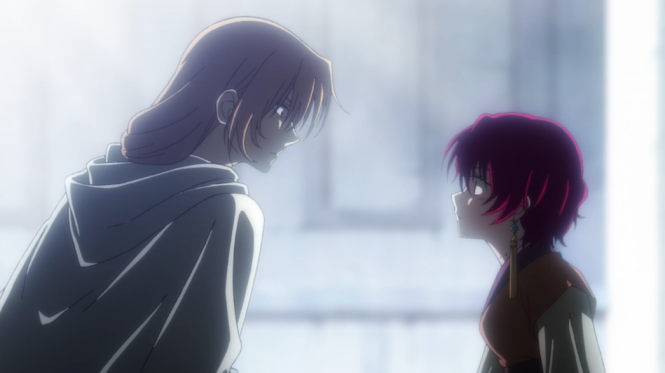 But, man, what a cliffhanger! This is the culmination of twenty-two episode’s worth of tension: all that stuff about Yona’s divine ordinance versus Su-won’s channeling of the people, all the contrasts between King Il and Su-won, the primal pain of betrayal…all of that is behind the force of this meeting. And remember that while we the audience have been seeing Su-won act as king, Yona hasn’t seen him since the night he stabbed her father with a sword and ordered her killed. To her, she’s the man she loved, who killed her father—not the gracious king we know him to be.

A order on the manga order: I heard that, in the manga, the Earth Tribe arc came after the pirate arc, leading directly (I presume) into this meeting. Frankly, I think it was a brilliant choice to move it earlier and let us forget for a bit that Port Awa was in Earth Tribe territory, that Yona and Su-won were in such close proximity. But, more than that, I think moving Yona from a huge character moment into direct contact with Su-won was a brilliant move. We’ve seen so much growth in her over the last few episodes—now it’s time for her progress to be put to the test.

Can’t wait for next week. I don’t really feel like I did an adequate job on this episode, so my recommendation here is just to go watch it again. 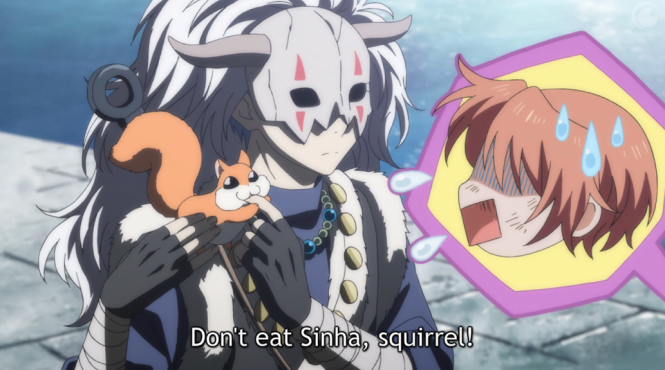