Well, it wasn’t quite the ending I wanted for Akatsuki no Yona (ignoring the fact that I didn’t want any sort of ending), but it was still a nice comma in the longer sentence of the show, a catching of the breath, if you will, for a second season we tragically may never see. But let’s save the lamentations for later and simply enjoy what we have for now. 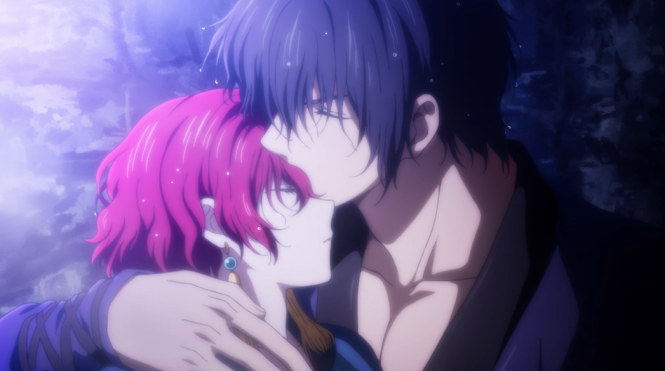 More than any other episode we’ve ever had of Akatsuki no Yona, this one felt more like a patchwork of scenes rather than a coherent arc of a story. I get why. Pierrot’s probably aware that the trigger will never get pulled for a sequel season and so did their best to get everything to a nice stopping place even if it meant gliding through some a scenes that really could have used a little more context or breathing space. But, for all that, we did get some awesome scenes before Akatsuki no Yona left us, starting with the moment when we see Yona dressing the deer Jaeha brought back. Not only is she strong enough to acknowledge that it’s still somewhat difficult for her, but I see her line—”Turning away would mean ignoring this fawn was alive“—as kind of a reflection on her newfound perspective on the world at large around her.

Yona has come to a point where she can no longer ignore the troubles of those living in the kingdom, a resolution that leads into her decision at the end of the episode, and that inherent dissatisfaction with the state of her lands drives her to action. Part of that motion towards choice is funneled through the new presence of the final dragon, Jeno. Jeno’s joining of the party was one of those things that felt a bit too quick for my tastes—even some more time of the party dorking around in the woods looking for him would have been appreciated—but the end result is that Yona finally has all the pieces she’s been looking for.

The speed of his introduction also means that we didn’t really get a chance to tease out the intricacies of his character, which (on first glance) seems to have the potential to be one of the most fascinating Akatsuki no Yona has yet produced. It’s almost immediately apparent that Jeno is nowhere near as spacey as he seems, but whether facade comes from a desire to disengage from the seriousness of his destiny or from ease of acceptance isn’t something that we have a chance to see elaborated. I’m not saying that we should have got all that information in this episode, only that, given the unlikeliness of a second season, I want more.

The rushed pace is also kind of a shame given how interesting it is to see the characters’ (especially the dragons’) ideologies interact with each other. Ki-ja’s need to have Jeno conform to his conception of the dragon brotherhood clashes with Jaeha’s freedom aesthetic and even with Hak’s exceedingly practical approach to the dragons—can they take a punch or not? This has always been a strength of Yona‘s and the way it plays out here, with Ki-ja in grateful tears by the end, is a fantastic validation of the multiplicity of worldviews, even within such a small group with a common goal. Despite Jaeha’s gentle rebuke that Ki-ja can’t push his own values on to others, the scene sympathizes Ki-ja’s overbearing, overeager attitude by showing just how much this means to him. Which is beautiful and wonderful because it was all set up long ago as episode 10 showed exactly how Ki-ja came to be the way he is.

Anyways, that was a bit of a digression, so let’s come back to Jeno and what we did get to see of him. After Yona sees a peculiarly content look on Jeno’s face as Ki-ja cries, we get the beautiful night scene of their real introduction to each other. Whether because of her status as Hiryuu’s reincarnation or the understanding nature she’s developed for 24 episodes, Yona seems to understand Jeno at a level the others in the party do not. This was the one scene that really seemed to breathe this episode, generally unhampered by comedic stylings. And perhaps for no other scene was this more important, as the core of Jeno’s character seems to be made up of an ease of living compromised by a deep loneliness and lack of purpose (making him the polar opposite of Ki-ja).

Thus, it didn’t surprise me that Jeno was the one to pose the all-important question to Yona: what next? If he freely chose to follow Yona, it wasn’t because he simply had nothing else to do, but because he expected some sort of purpose. The immediate goal of this season has been met—acquiring the four dragons—but achieving that leaves a vacuum. These aren’t just toys Yona has collected, but legendary powers. Fortunately, Akatsuki no Yona has set up the pieces for the next step in the story steadily throughout, so that Yona’s eventual decision is one that extends naturally from everything she’s gone through to this point.

And in Yona’s moment of decision, we again see her chosen purpose paralleled with Su-won’s, which of course begs the question: what is the difference between them? At this point, it seems that Su-won’s determination is rooted in the kingdom as a single entity, while Yona sees it as a collection of individuals. Thus, her choice to seek out those troubled in the kingdom is a reflection (again) of the desire to understand others she’s cultivated from the very beginning. Is this humanism versus nationalism? It’s too early to tell, but these are still just seeds that are being sown.

The final check-in with Su-won simply reinforces the fact that Yona and Su-won have chosen different paths towards the same goal. Mun-deok’s compliment to Su-won over his work in the Earth Tribe (accomplishments, we know, he split with Yona) and Su-won’s repeated challenge to the heavens and, most importantly, his statement that he hasn’t accomplished anything yet define him not as an antagonist, but as a man following his own path. Where his path leads him and Yona’s leads her remains to be seen—and I want to be there to see it, whether animated or in the manga.

(Also, yes the final scene with Hak is pretty much self-explanatory. Do you really need me to tell you that he’s hopelessly in love with her?)

That’s the end of my posts on Akatsuki no Yona. I hope you all enjoyed reading them; I sure as heck enjoyed sharing them with you and getting to meet a lot of new people in my comments section. Here’s to hoping in vain for another season!