So, in a season of cuteness, more cuteness comes. When it rains, it pours, as they say. Except Ore Monogatari!!) (or My Love Story!! is a different kind of cute from the moe-heavy offerings the Spring 2015 season has already given us. In fact, with our protagonist openly flaunting the typical standards for attractive character designs, Ore Monogatari!! knows it’s a different kind of show. And so, I’m happy to fulfill my promise of episodic reviews for the next 24 weeks of good shoujo anime. Cheers, and I hope you enjoy!

Whatever I was expecting from Ore Monogatari!!‘s premiere, a Mekaku City Actor-style fairy tale introduction was not it. As an allegory for Takeo Gouda’s life, it’s not all the subtle, but it’s perhaps more revealing of his backstory than is immediately apparent. For me, two big things jump out immediately: 1) the parallel between Gouda and the Red Ogre’s respective inability to connect with those they want to connect with, and 2) the sacrificial nature of the blue ogre’s (Sunakawa, presumably) relationship with the Red Ogre. Without more context from the story proper, it’s difficult to totally unpackage the fairy tale and say how much of it is directly symbolic of Gouda’s life and how much is simply there to facilitate the creation of a specific tone, but it was nonetheless a notable and beautifully drawn introduction for the series.

And so, we begin. It was obvious from the promotional art that Gouda was a…fairly decent-sized human, but it seems Ore Monogatari!! is hell bent on displaying just how much of a departure from your normal anime boys he is. The first shot we get of Gouda after the OP gives a decent sense of just how big this kid (and he is a kid) is. And the second one (god bless his heart) shows just how much of a sentimentalist he is. I really appreciate this kind of efficient storytelling, especially in the introduction. Using the visual to show us both Gouda’s physical persona and the contrasting shot of his face to reveal his personality is funny, quick, and also has the effect of not making a big deal out of his size. We, the audience, already know he doesn’t fit the stereotypical image of a shoujo male lead; we don’t need the show to tell us that. Better yet, by not making direct commentary on his height, Ore Monogatari!! normalizes Gouda as the protagonist, rather than sensationalizing him. That’s exactly the way diversity in storytelling needs to happen. (More on that in the future, maybe.) 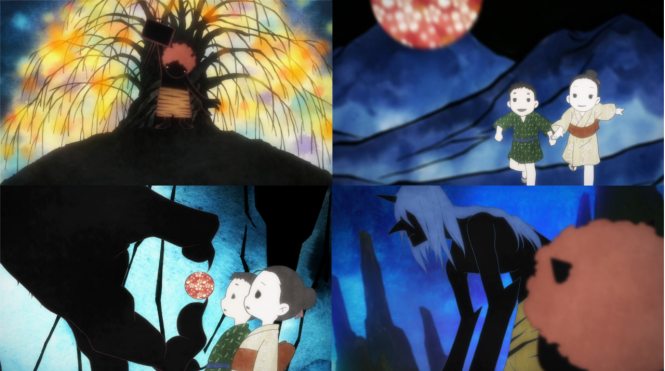 The title of the episode (“My Story“) also claims the narrative for Gouda definitively. This is his story—not his good looking best friend’s story, not his love interest’s story, not even the red ogre’s story. The actual story’s first divergence from the fairy tale comes right on the heels of the graduation assembly, as we see Gouda surrounded by people wishing him farewell. Whatever his romantic struggles may be, it’s clear Gouda is beloved by his male peers and club kouhais. And it’s from this base understanding of him that we watch our Gouda charge off to confess his feelings to a girl. I don’t think Gouda devalues the relationships he has, by any means, but his somewhat passive acceptance of his friends’ goodbyes contrasts with the fiery agency with which he sets out to make his feelings known and tells us one more thing about this guy: he might just be a bit in love with the idea of being in love.

So, there’s a kind of humorous irony in Makoto Sunakawa’s apparent disinterest in romance (and potentially in people in general) as we see the intensity of the attachments that surround Gouda. Sunakawa himself made a pretty strong impression on me—and not just because he looks a whole heckuva a lot like Chihayafuru‘s Taichi Mashima. His stoicism in the face of pretty much everything excepting Gouda just strikes me as really funny. He’s kind of the straight man to his buddy’s overblown antics, lending a touch of dense common sense to the proceedings of the episode. And I really do appreciate that Ore Monogatari!! is took the time to properly set up this relationship, to explain how to mismatched boys like this could become friends (through their moms!) and to show the chemistry they have together. Presumably, this is going to be an important relationship going forward, so getting it right from the start was important. 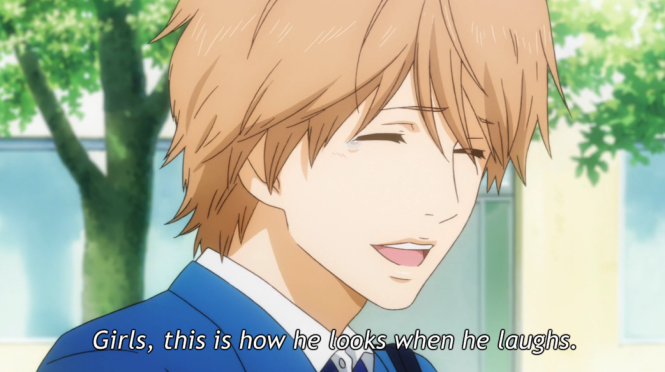 It’s a great partnership and friendship (and bromance!?!?), and I really like how the show folded Gouda’s exploits standing guard outside the school into their relationship building as a way to show that Gouda is one of the few people who can get Sunakawa to let down his guard a little bit.

We actually get to see the partnership in action during the groper sequence, as it’s Sunakawa who notices the groper, Gouda who stop him, Sunakawa who tells Rinko they’ve got it handled, and Gouda who brings the perpetrator in. I could say a few things about the who set-up here: not much a fan of using the groper rescue as the hook for Rinko’s infatuation with Gouda, nor of the “she was asking for it” line leading to the punch out, nor really of Gounda’s overly gentlemanly rhetoric. It just happens to rest a little too far over the “girls are helpless by themselves” line for me, but I’m really hoping it will be something mostly constrained to this episode, letting the relationship just develop on its own from here on out.

But the good thing here is that it provides an opportunity for Rinko Yamato to enter the story. It’s pretty obvious already that Gouda, not Sunakawa, is the one she’s smitten with and I kind of like the dynamic of Gouda assuming she likes Sunakawa—not because he’s really all that dense, but just because that’s what he’s used to.

Rinko herself (and you don’t need me to tell you this) is almost tragically cute. I say tragically because of her currently unacknowledged feelings, but the bumbling, nervous way she goes about trying to get to know Gouda is incredibly endearing and gives me a lot of hope that this relationship won’t just be a one-sided case after the girl. As far as a portrayal of a high school girl goes, I’m pretty sold (although Megumi Han’s high register for her is just a tad too tinny for my tastes), especially by her behaviors like worrying about being thought creepy or bringing yet another gift to thank Gouda for returning her phone (a little overboard there, I think, chica) or over being too sweaty.

The rest of the episode’s charms really rest on the reliability of Gouda’s thoughts and the easy chemistry between the three main characters. The depiction of his realization that he like Rinko and his later thought in the bathroom that, “There’s no point in developing feelings for her,” are both sensations and thought processes that I recognize myself. If Ore Monogatari!! can keep up that level of grounded introspection (Sunakawa’s reflections on Rinko and the final line of the episode—”My mom likes ’em“—fall into this category, too) it’s going to be just fine.

As far as everything else goes, Ore Monogatari!! look about how I expected it to look. You can definitely see the Chihayafuru influences in the visual aesthetic, as well as in the direction and in the music, and the whole production has a nice level of charming polish that allows it to be pretty without being overwhelming. The voice acting actually did throw me for a bit of a loop, though. Gouda’s voice is lower than I had expected, Sunakawa’s is higher, and Rinko’s (as I said early) usually rests a few pitches above what I’d like. However, Megumi Han does drop down into a lower register a few times, so maybe Rinko’s high voice is more of an act? Who can say at this point?

Anyways, it was a great premiere and I’m very much looking forward to watching and blogging Ore Monogatari!! from here on out! Gotta keep up my shoujo anime blogging brand. The whole show is cute as heck from both character and relationships standpoints, and I’m very much looking forward to the inevitable adorable romantic antics these kids are going to go through. Here’s a cute Rinko to close things out.