Unlike the last few times I’ve been a been down on Ore Monogatari!! and not quite sure about how I felt about it, this time I’m very much certain in what I felt about the episode and why I felt that way. Hold on tight, folks. This is going to be a rocky ride.  If you’ve been with me since my very hot-and-cold posts about last season’s Your Lie in April, you’ll know how much I find myself fascinated by shows that posses the capacity to simultaneously enrage and enthrall me. This episode of Ore Monogatari!! is very much the same—some moments of absolute brilliance, a lot of stuff that really got on my nerves. So. Let’s go to the beach!

I flip-flopped between starting with the good or starting with the bad, and I decided to start with the things that were good about this week’s episode (because I know that once I get started on the bad I won’t be able to stop). The good things this week: some of the comedy, Free! flashbacks, and Takeo finally verbally expressing his love to Yamato.

Most of the comedy this week didn’t work very well for me, if only because I was so preoccupied with the stuff that was bothering me that I started see the echoes of it even in the moments the show was being funny. And Ore Monogatari!! is really good at being funny, so it was something of a shame to have the humor dampened by the other stuff the show was doing. The best comedy that happened was mostly comprised of Takeo and Yamato’s respective hysterics over the other’s beach attire. Takeo’s two amusingly over-animated (especially the first time) reactions to see Beach.0 Yamato were hilarious for the sheer ridiculousness of presentation, while Yamato’s hapless attempts to still her beating heart are as endearing and amusing as ever. These kids have it bad for each other and there’s an unavoidable charm in seeing two barely-young-adults try to manage what are totally unmanageable emotions. 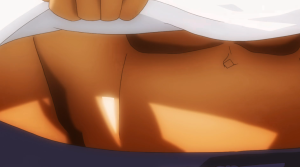 Another great moment was Ore Monogatari!! doing its level best to pull off a Free!-like scene that would have left Gou Matsuoka in a daze. Of course, it does a pretty good number on Yamato, too, but the sheer indulgence in Takeo’s absurdly chisled muscular artiface was just so over the top that I was swept back to the days of “Swim free!” And fond memories those are. And, really. Look at those lines. They were clearly drawn with love.

And, of course, the best moment of the episode came near the end, as Takeo (after weeks of me pointing out that he always does this mentally!) finally verbalizes a “Yamato, I love you,” directly to her. I’m actually of the opinion that Yamato did a whole lot of the heavy lifting for this scene—between the show taking full advantage of the sunset to cast her in a gorgeous color palate and Yamato taking the initiative to once again spell out (literally in the sand ha ha) how much she likes Takeo, nearly all of the forces directing Takeo to this important statement were generated by Yamato once again taking initiative in the relationship to make her needs and wants known to Takeo. Plus, the cinematography at that exact moment—to be specific, the cut from Takeo’s confession to Yamato’s face—was totally beautiful. Easily the best single moment of directorial work Moria Asaka has had in this show.

The shot of Yamato is exceptional, but the timing of the transition (along with moving from the straightforward shot of Takeo to the beautifully split shot of Yamato) made the moment even better.

It’s just unfortunate that such a perfect moment 1) fell into the time-honored, awful anime tradition of interrupting kiss scenes, and 2) came in an episode so bogged down with ancillary problems that it felt drawn out of an entirely different show. I don’t think I need to say all that much about why having Takeo’s friends interrupt was bad—it’s archetypal anime romantic-tonal dishonesty, a cheap laugh at the expense of (particularly in this case) a moment of genuine emotional authenticity. But that’s typical of anime. Expected. I hoped better from Ore Monogatari!!, but I wasn’t surprised. And I don’t think it would have bothered me as much had I already not be irritated with the show from earlier in the episode.

And it started early. The first moment that really caused me to go, “Really?” was when Takeo storms over to his classmates and threatens to exile them from the beach trip because they’ve expressed excitement at getting to see the girls in swimsuits. Now—to be clear—the whole “go to the beach to ogle girls in bikinis” line of thinking is yucky for reasons I don’t believe I need to articulate, but the way the show uses Takeo as the moral compass to chastise these teenage boys comes across as unsubtle and troubling in the way it builds up Takeo by breaking down these other characters. This isn’t that far a cry from the way shows like Sword Art Online emphasize the greatness of their male protagonists by making every other male character a complete scumbag perv. 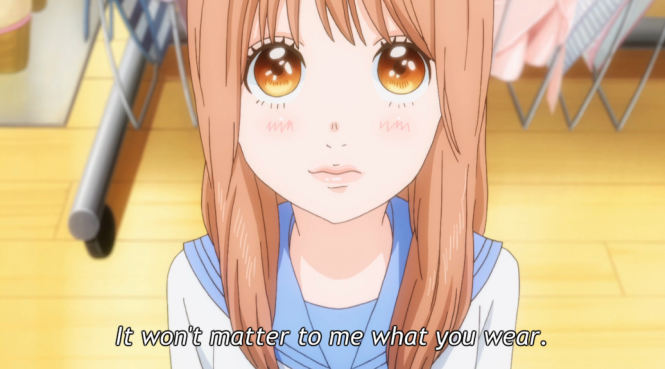 There’s an even more troubling dynamic in the way this plays out between Takeo and Yamato. While Takeo’s line—”Yamato, it doesn’t matter to me what you wear.”—should read as a really sweet expression of how he’s not attracted to her merely for superficial reasons, coming on the heels of this interaction with Takeo’s classmates it feels like a pointed comment that Yamato should not try to dress up for Takeo…which the show then proceeds to make light of via the silly sequence of Yamato testing out super skimpy swimsuits that, more than they don’t match her body type, don’t match her personality. Ha ha, look at this silly girl trying to impress her boyfriend by dressing way sexier than she can pull off. This should be a funny moment, but given that Ore Monogatari!! has opened up a dialogue about clothes, presentation, and impressing others—suddenly it becomes an entry into this conversation, even if the show is playing it like it’s not.

And then things just pile on from there—Yamato makes direct comparisions between her own body and Takeo’s (ridiculous, but the inferiority complex she has in this relationship is starting to come clear and eventually is actually articulated), Takeo again glaring at the other guys for giggling in cutesy animated contractions over seeing girls in swimsuits, the show allowing Yamato to drool over Takeo’s body while having Takeo aggressively work to not look at Yamato (hello double standard!), the eventual dismissal of Yamato’s outfit as “just clothes,” and the final straw sandcastle moment (at which point I was basically furious). 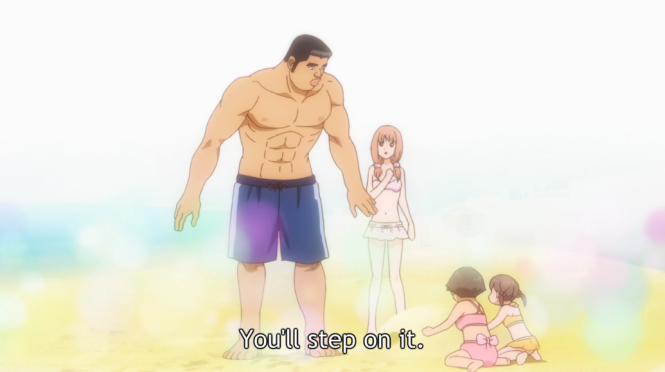 While I definitely see the argument here for “Takeo’s such a great guy! He’s not objectifying Yamato and he’s not lusting over her body! He cares about her as a person!” the issue is that Takeo is continually being fashioned into an impossible fantasy of the “perfect boyfriend,” where his physical non-conformity has become nothing more than lipservice towards making an actually thoughtful critique. We’ve talked about Takeo’s flaws before, but this is a guy who is loved by everyone except for a small pack of snotty high school girls and people who misunderstand how awesome he is because of the way he looks. He’s strong. He’s kind. He’s not a “typical pervy teenage boy.” He looks after Yamato, cares about her, and builds walls out of sand to protect her cute drawings.

This is an unattainable ideal.

And Yamato, on the other hand, functions both as a self-insert character who embodies both “how to charm the perfect boyfriend” and “the perfect girlfriend.” She’s ditzy and totally in love with Takeo. She bakes food all the time. She constantly choruses how hot, cool, strong, and awesome he is. And she always blames herself for everything, so that none of the blame ever falls on Takeo. Now, obviously, we know Yamato not seeing a sandcastle because she’s out of her mind crazy for her boyfriend isn’t the mark of a bad person by any means—BUT NEVER IS THIS ADDRESSED BY THE SHOW. Yamato doesn’t change her mind. Takeo only says, “I’m not much better.” HA! YOU PLAY WITH SMALL CHILDREN WHAT THE HELL ARE YOU ON ABOUT? We’re not going to try and contradict this line from Yamato at all!?

And instead of dealing with any of this—with double standard about who can look at who (incidentally, if looking at someone in their swimsuit is bad as per Takeo, doesn’t that make Yamato bad for doing that to him?), with Yamato’s incredible inferiority complex in the face of Takeo’s perfection, with the way Takeo chastises his friends and then gets excited by seeing Yamato in just her hoodie, with the way Takeo consistently failing to understand Yamato’s wants gets played for comedy—it all gets swept under the rug of an aesthetically gorgeous sunset scene and an “I love you.”

That’s not healthy. This is not how good relationships work—and the fact that Ore Monogatari!! continues to play with this untenable fantasy in terms of cuteness and comedy is incredibly troublesome to me. There are real issues that Ore Monogatari!! continues to hint at, but it won’t engage them. And then the fact that the one moment where the show isn’t playing at silly-cute fantasy is interrupted by boilerplate anime nonsense? Wow.

Another moment that could have been a path into actual character development for Yamato—but it’s so vague that it’s meaningless and never touched on again.

So, that’s that—and, frankly, I don’t even think I’ve fully articulated with clarity everything that bothered me about this episode. In summary, I think it all goes back to the issues I’ve had with the show for a long time: the feeling of relational imbalance in terms of who the show validates, the relative lack of flaws in Takeo’s character (real flaws that cause him problems), and its irritating tendency to tease at deeper themes and character moments without ever committing to them. I won’t stop watching the show; I’m holding out for those good episodes—but this is no longer the trope-busting juggernaut it seemed to be. Instead, I think it’s dangerously close to becoming a subtly unhealthy romantic fantasy for both guys and girls alike.

Note: I know there are nuances and exceptions to these issues that I haven’t touched on. Please, hear what’s at the core of what I’m trying to say—and then let’s talk about the things I couldn’t address.