The spring season is effectively over, with only two shows left to have their finale episodes (Sound! Euphonium later today and Blood Blockade Battlefront on Saturday). So, time to recap what ended well and what didn’t and what didn’t actually end and how I felt about all of it.

Ore Monogatari!!, Episode 12: A farewell to this blogging series…

Sound! Euphonium, Episode 12: I suppose you could call this episode, “Go, go, Kumiko!” as our lovable protagonist has really had a fire lit underneath her and inside of her. That’s the cool thing about running into exceptional people in our lives—if we let them, they can inspire us to great, amazing things. And so, now, we basically just get to watch as Kumiko does her best to become what she wants to be, as motivated by Reina. And Eupho nails both the frustration and the impossible-to-contain motivation that such an emotional state generates in you. It’s poignant, inspiring, and beautiful. Lock in the rest of the production, like the gorgeous nighttime and oppressive daytime shots we got from the visuals, and everything turns into one glorious blob of the beauty of adolescence. So, yeah. Cool stuff. 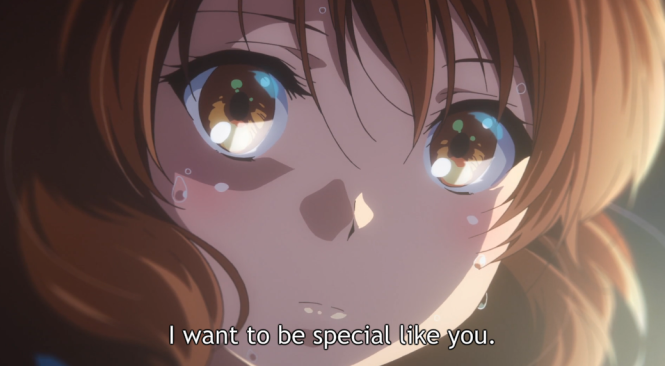 Danmachi, Episode 13 [END]: A flashy, fireworks-filled finale that didn’t quite go for the thematic stuff I wanted it to go for, but it was still nice. In fact, the highlight for me was not the battle itself (which was nicely balanced between a huge number of characters—letting multiple people have several moments in the spotlight and doing a fantastic job of building up to the climaxes), but Hermes’ exuberant, joyful, almost euphoric shout to Zeus at the end of the episode. It wasn’t quite a thematic declaration, but it was a deeply felt, hugely authentic celebration of Bell’s growth to this point—something that wouldn’t have been possible without all the people who surrounded our white-haired moeboy over the course of the season. More overarching thoughts are coming in tonight’s Aniwords column, so be on the look out for that!

Nisekoi, Episode 12 [END]: Many Chitoge faces, many good Chitoge moments. In other words, about the best you could ask for from an episode of this season’s Nisekoi, which was, on the whole, not very good. But Chitoge episodes are invariably the best episodes Nisekoi manages, so this was a nice way to end the season. I don’t really expect we’ll see more of the show, but who knows? We could be surprised. But anyways, back to Chitoge. Actually, nevermind. Just look at this picture instead. Game over.

Yamada-kun, Episode 12 [END]: About as solid an ending as we could have possible asked for considering the huge amount of material this show had to cover in just twelve episodes. They hit all the high points—even though at the halfway point in the episode I was like, “They can’t do it. It’s not possible.”—and even let the all-important Yamada x Urara scene breathe naturally and peacefully at the end of the episode. And what a scene it was. Urara thinking Yamada had already realized she liked him. Yamada actually telling her he loved her. Urara making up an excuse to kiss them. Both of them messing up the kiss by hitting their teeth after kissing to swap bodies dozens of times prior. Urara just wanting to kiss the boy she loves, nothing more and nothing less. And Yamada being in love and embarrassed and in love. Can you believe this couple, that came out of a shounen harem manga? It’s fantastic. 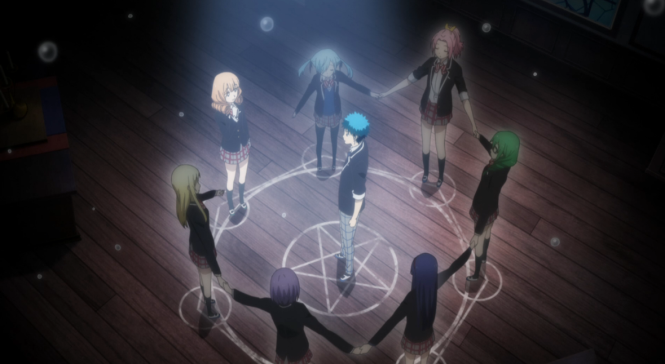 Oregairu, S1 E7 through S2 E13 [END]: I don’t even know what to say. This show has put me in a serious funk. Given me a whole hell of a lot of things to think about. It demands that you consider what it’s saying, how it applies to your own life. Your masks. The lies you tell yourself to keep yourself from getting hurt. It’s not very fun. In fact, it’s actively unpleasant. But it’s super powerful and I can’t help but be grateful, even if it dredged up a few things in me that I’d probably have preferred buried away. And then, Yui. Oh, Yui. I am so, so, so sorry. You are going to get hurt, get hurt bad—and I can’t stand it, even though I know there’s no other way for it to end. Sorry, I don’t have anything more than that. I just can’t with this show right now. It’s far too personal and I distancing myself from my reaction to it just isn’t possible yet.

Ping Pong the Animation, Episodes 1-6 (Rewatch): Man, this is such a darn good show from top to bottom. The English dub is actually quite good, although the mood the English voice actors bring to their roles is rather different than what the Japanese voice actors did. Which is interesting and different, but not bad.