Our time here on earth is limited. It’s bound by the inevitability of time, by the temporality and transient nature of human life. Our entire existences are marked by this unavoidable inconsistency—we change, the people around us change, our relationships with them change, and the world itself changes. At the beginning of Madhouse’s adaptation of Kugane Maruyama’s light novel series, Overlord, the main character Momonga finds himself dealing with the reality inside the virtual world of Yggdrasil, a MMORPG in which he’s spent hours with friends, building up a grand castle…a structure which now only stands as a wistful reminder of what once was.

Episode 1: “As One Community Fades Away, Another Arises”

As Overlord opens, we hear Momonga’s thoughtful reflections on his time inside Yggdrasil, as he repeats the refrain to which he returns several times throughout the course of the episodes—”It was fun. It was really fun.” At the table with him sits just one other player represented by a slime avatar, Herohero-san. During the course of their conversation, we discover that it’s been nearly two years since they both played together, and that Herohero has been working tons of overtime in his real life job (presumably the main factor in his long absence from the game). The two old comrades, the final members of a 41-person guild Ains Ooal Gown, chat briefly before Herohero, pleading physical exhaustion, logs out. And Momonga, Level 100, is left alone.

This is a trapped-in-an-MMO anime, but the thing that sets Overlord apart from its high-profile counterparts (SAO, Log Horizon) so far is that Overlord combines a sense of familiarity and a feeling of fond nostalgia to generate an intensely melancholic tone through the first part of the episode. The Great Tomb of Nazarick is a symbol of the memories of the guild’s golden days, but for Momonga in the final moments of the Yggdrasil servers, it is also a prison of the past—a symbol of the community he once had, a community that has now moved on to other things. 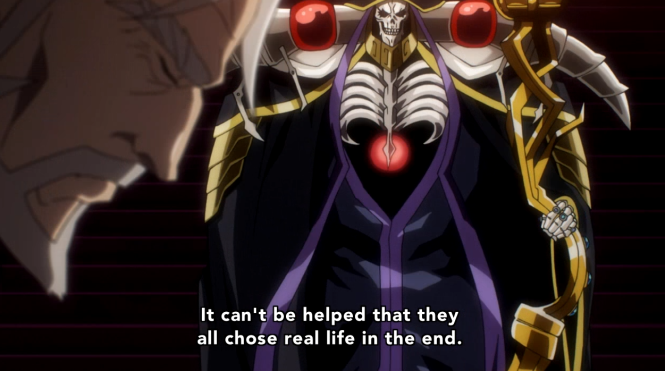 What we see, through Momonga’s alternately angry, alternately thoughtful perspective, is a profoundly nostalgic depiction of the final moments of an online community. Having been a part of a number of MMORPG guilds that slowly faded away into nothingness as players left the guild or grew bored with the game in ones and twos, the quiet wistfulness of Momonga’s final moments in Yggdrasil was instantly recognizable to me. As his repeated apologies to his absent guild members show—”I’m sure the guild members will forgive me for doing whatever I want just today” and his anguish over changing Albedo’s settings—the physical space of Nazarick is representative of community ownership, something a group of people built together. Left alone, Momonga is almost loathe to change anything, to sully the memory of what he once had.

It was, if you will, a family of sorts. Despite the opaque layers of online handles and the inhuman avatars required by the guild, the staff, the castle, and even the NPCs were an accomplishment completed together. Amidst all this, Momonga is isolated within the ideal of his memory, the physical tokens of the past, and the visual emptiness that surrounds him as he makes his final tour around the fortress.

And then, as the clock ticks down and Momonga prepares to relinquish the trophies of his emotional, temporal, and (likely) financial investments to the claim of time…the clock starts over and the world Momonga knew is truly erased, wiped over with an entirely new paradigm of existence.

But out of this loss comes something new. Something special and important. The oppressive sense of loneliness that pervades the first half of the episode is replaced by the urgency of familiar unfamiliarity, as Overlord robs Momonga of his reminiscence by 1) forcing him to acknowledge that this is no longer the world he used to know, 2) providing him with something to do, and 3) giving him brand new community on which to rely, on that arises out of the ashes of what his old community created—the NPCs. This is wish-fulfillment, make no mistake. In the very moment in which Momonga has been totally abandoned—by his one-time teammates and by the world itself—the creations of that old way of being come to life in complete loyalty to him. No longer will Momonga be forgotten along with the relics of his now-meaningless conquests. Those very relics have been given new meaning by becoming the support on which he will lean for the rest of the show. 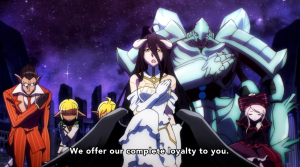 The final dynamic, then, is that of real life versus the online world. Although Momonga states that it couldn’t be helped that his guildmates eventually chose real life over Yggdrasil, his own musings on the value of his old life betray a desire to escape the monotony of his 9-5 job and fully embrace the new world in front of him. But he can’t do it alone. Before him stretches the abyss of isolation, of the episode’s first half. And that’s why, without the other members of Ains Oowal Gown there, we see Momonga treat his NPC servants as more than just foot soldiers. This is best shown in his interactions with the twin dark elf guardians—Aura and Mare. Following their fight with the fire elemental, he offers both of them a drink of water and jokes with him about his exterior persona (which is delightfully at odds with his far more uncertain interior thoughts and made real by Satoshi Hino’s voice acting).

Although Momonga considers the necessity to maintain the image of a commander in front of his loyal subjects, his desire to connect is evident in these actions (and even, I think, in the fanservice-ridden encounter he has with Albedo). And that is where Overlord leaves us at the end of its premiere. While the show certainly could slip into light novel nonsense from here on out, I also see a great deal of potential for Overlord to begin to nuance the characters of the NPCs, building up not only an army, but a new family around Momonga.

For now, that’s more than enough to make me excited for the rest of what Overlord may have to offer.