This was the week the charms of newness started to wear off for a lot of shows. I always feel like early on in seasons, I’m kind of breezing through shows and liking them just because they’re new, but by the time they’re started to kick into their real stories in the fourth episode (note, the fourth, not the stupid third) is when they start to show their cracks or I start to tire of them. How much those two things are related…I’m not sure and I’m not enthused enough to think it through. Anyways! 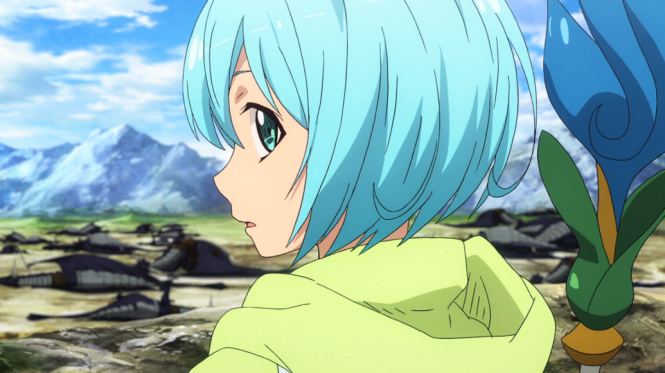 Gakkou Gurashi, Episode 3: Whoo boy, what an episode out of this show. If it hadn’t been for Shirayuki-hime‘s episode this week, Gakkou Gurashi would be running away with the title of best-directed anime this season. As it is, Gakkou Gurashi‘s still in the lead (just not by as much). From booting off the episode with the super widescreen aspect ration, to shots of the incidental structures imposing upon the main subject of the shot, to the staticy transitions, to the perfectly timed cuts to black, this was easily our horror-moe show’s best episode of the season, executing on the terrifying side of its potential with really horrifying excellence. I’m really not much of a horror fan or even a thriller fan, but Gakkou Gurashi is just so engrossing in how completely it has been able to sell this dual-edged set-up as a cute girls show with a dangerous background that I can’t look away, even though I’m scared. 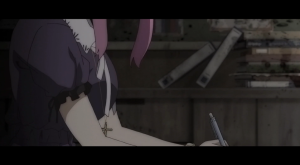 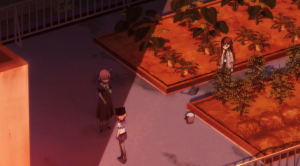 Ushio to Tora, Episode 4: Another episode for this last week that turned out to be much more tense than expected. For me, though, the more fascinating thing even than how well the story elements were done, was the visual production—which was better this week that it’s ever been. While Ushio to Tora has been good, it’s never really been great until this week. How did this come about? Well, I learned via some well-informed people on Twitter that this episode had been completely outsourced from Studio Voln/MAPPA to Studio Dangun, which is attached to a semi-big name that I can no longer recall (nor can I find the tweet that had this info in it). In any case, whoever it was really knew what they were doing. Outsourcing entire episodes isn’t an unusual practice, but for them to end up better looking and better directed than the main studio’s work is. Again, this isn’t to say that Studio Voln isn’t doing a good job with Ushio and Tora (supposedly MAPPA has yet to work on an episode, leading to suspicions that they’re just providing studio space for Voln)—just that this outsourced episode was the series’ best yet.

Classroom Crisis, Episode 4: Are your surprised that this was my favorite episode of the week? No? Good. If you are…I have some work to do. This week’s Classroom Crisis was a whole lot of fun, from corporate shenanigans (that’s basically where we’re at right now) to accounting tricks to corporate dog shouts, but the best part for me was seeing the ditchers from last week come back to join their buddies at A-TEC once again. Part of me is curious to see if there’s some lingering bitterness there, but it seems from how the characters acted (particularly Mizuki) that they’re going to self-censor away from that, at least for now. We still haven’t got to the main part of the story yet (the OP promises spaceship racing), but with the set-up this loaded with charm I’m still enjoying it a great deal. I would like to see some of the side-characters (especially in A-TEC) efficiently fleshed out without spending too much time on them, but the ensemble cast is functioning well so far. Go, go Classroom Crisis! Keep up the good work!

Durarara!! x2-2, Episode 4: Feels like it’s been forever since I actually wrote about an episode of Durarara!! for one of these, but this episode deserves it as it was probably my favorite episode of the sequel seasons since the early episodes of last season. First off—dumping Varona into Tom and Shizuo’s debt collection posse was a stroke of genius (one that I daresay’s been lacking from Durarara!! of late without Mikada, Kida, and Anri around much). Varona was kind of a lame character last season, but putting her near the dynamic Shizuo and giving her a definite goal and clearer motivations really helped her settle in. Akane and the Orihara twins also did some nice work for grounding Varona in relation to the rest of the cast—which is really the key for any character in Durarara!!. These guys are made more real by the people they’re surrounded with, so the more their connections are expanded and the less they’re off in their own little worlds, the better the show as a whole gets when it focuses on any particular one of them.

Gatchman Crowds insight, Episode 4: While I found this episode fascinating because of the tremendous volume of ideas that came out of it, I confess I found it significantly less engaging than any of the prior episodes. I’m not opposed to characters just sitting/standing around and talking, but something about the delivery and direction this week after the battle with Riziumu ended felt lifeless and dull to me. Which is a shame, because Crowds continues to just pump out idea after idea and concept after concept, letting them all crash into each other with—as Hajime says—sparkles! Except you have to imagine the sparkles in this episode. Part of me is wondering if Crowds is on the verge of one of the legendary Tatsunoko drops. I sincerely hope not, but there just wasn’t as much in the presentation this week as in prior weeks. The ideas are still carrying this show along, but I can think about ideas on my own. As a media piece, I expect a little more from Crowds. 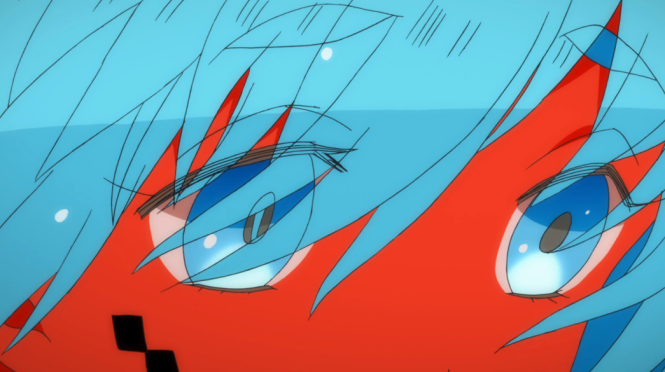 Akagami no Shirayuki-hime, Episode 4: Wowzers. Shirayuki-hime is truly stating to come into its own under the skilled care of Masahiro Ando and Michiru Oshima. Frog-kun recently wrote a post on Oshima’s music in Shirayuki-hime and Rokka, pointing out both that Oshima’s a skilled composer (very true) and that her music adds a lot to both of these shows. For Shirayuki-hime and me, this has been absolutely true, as Oshima’s score has noticeably enhanced a number of scenes for me since the first episode. Better yet, Ando’s visual direction was all all over this episode (particularly in the stunning scene with Shirayuki and Zen towards the end of the episode) and the story is finally starting to let the characters’ personalities expand. Ryu is a fantastic addition to the cast who helped a lot with both Zen and Shirayuki’s characters this week, and the lowkey mood of every scene, even the more emotionally charged scenes, has grounded the show as a whole is an elegant sort of dignity that’s starting to remind me a bit of Blast of Tempest. And, yeah, y’all should know that’s high praise indeed.

Dropped This Week: Charlotte (but the OP is so good!), Danchigai (incest=done), Rokka (four episodes to get to the premise is TOO LONG)