Any worries that Hyouka‘s first episode was just a fluke of goodness have been dispelled (not that I was really much worried about that anyways). Episode 2 turned in an excellent new character with Ibara, continued to add nuance to Satoshi, Chitanda, and Oreki’s characters, and episode director Hiroko Utsumi’s focus on body language gave us one big new clue to unraveling the true mystery of Hyouka so far—Eru Chitanda.

Before we get into the episode proper, I want to make sure I mention what a big impression the opening to this episode made on me. If you’re just tagging along with the posts and not watching/rewatching along with me, the episode kicks off with the Oreki’s sister Tomoe narrating the fateful letter that forced him into the classics club over scenes of Oreki getting ready for school. The reason this caught my attention was that it occupied the entirety of the pre-OP tag, and it stuck me that this was really excellent construction of an episode of TV. Knowing the exact content of the letter, which was far less pushy than we might have been given to expect from Oreki’s reaction to it, was a nice close to that little mystery, but stuffing it all in before the OP break allowed the rest of the episode to play out naturally. (Incidentally, the mid-episode break also marks the shift from one part of the episode’s story to another, which was another nice bit of episode building.)

The other biggish takeaway from the letter was Tomoe’s closing line—”Protect the Classics Club, the place of my youth!” Hyouka doesn’t exactly seem to be obsessed with the idea of youth, despite all of Oreki’s monologuing on it during the first episode and the infrequent returns to it, but there does seem to be some tension between the laid-back way Hyouka proceeds through its episodes (at Oreki’s pace, you might say) and the inherent nature of mysteries as things to be acted upon and solved (in other words, the Chitanda factor). A Classics Club doesn’t exactly seem to be the ideal bastion of the active “rose-colored” youthful life, but apparently it was such in the past—and it’s starting to become that once again despite all of Oreki’s attempts to counteract this movement. 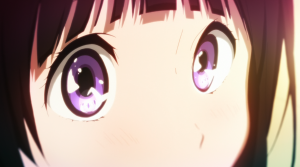 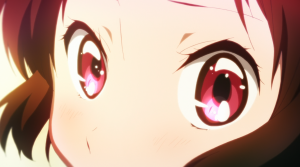 As I see it, this episode of Hyouka was concerned with two main ideas. The first of these, which was primarily communicated visually through body language, was the continued invasion of Chitanda into Oreki’s life. The second was a continued crystallization of a theme that had its genesis in episode 1—that of stasis versus movement. It’s no coincidence that these two ideas are pretty closely interlocked, because they both concern the relationship between Oreki and Chitanda. For now, Ibara and Satoshi stand mostly outside, providing a natural contrast to the main relationship (although Ibara’s long-standing attraction to Satoshi perhaps places her in the ‘stasis’ category, while Satoshi’s tendency to push Oreki might put him in the ‘movement’ camp).

Right now, Oreki seems to be flailing about, searching for any kind of rationalized plausible deniability to reconcile his stated philosophy of energy conservation with the high investment (in very small things, you’ll notice) activities Chitanda continues to demand of him. As we saw last in last episode’s abstracted scenes (in which Oreki was depicted as tied up, helpless, by Chitanda’s hair) and again this episode with the restaurant scene, Oreki is being moved against his will by Chitanda’s unending string of ideas. The interesting question this raises is: why does Oreki really protest? Is it because he’s truly committed to a lifestyle of low investment or just because he doesn’t like being pushed around?

It’s not clear yet, but Oreki’s “different” speech towards the end of the episode suggests there’s a very definitely perceived gap between Oreki and the other three characters of the main quartet. I say “perceived” intentionally, because I’m not sure as of now whether or not that gap is the real thing or simply a defensive construct Oreki uses to excuse himself from the emotionally and mentally exhausting prospect of actually investing in things. And that’s another distinction I’m making, or rather, a conclusion I’m drawing out of Oreki’s ‘energy conservation.’ I certainly could be proven wrong in the future, but it seems to me that Oreki’s main concern is less about conserving energy for its own sake, but with avoiding investment because its exhausting. So tries his best to stay static.

The inconvenient thing for Oreki is that other people want to invest in him. Specifically, his natural intelligence and aptitude for “satisfying Chitanda’s curiosity” has caused her to be interested in him and want to ask things of him and having him around her. The impending confession (which I don’t really expect to be an actual love confession) indicates as much, as out-of-school interaction over “something important” demonstrates that Chitanda is ready to invest even more deeply in Oreki, even if he isn’t ready for it.

This might speak badly of Chitanda, but I honestly don’t think she knows what she’s doing. Earlier in the post, I mentioned the episode’s focus on body language, and man, it was really all over the episode. Check out this sequence of shots:

The last shot here is particularly good, because it uses all the empty space in the frame to emphasize just how cornered Oreki is—along with the visual metaphor of the solitary satellite out in space. Oreki would be like that satellite if he could, but there’s a gravity that continues to pull on him. But, like I said before, I don’t even think Chitanda realizes that she’s invading Oreki’s personal space and, in doing so, compelling him to go along with her against his wishes (although she does often ignore his stated desire to do nothing). It just seems so instinctive for her—she moves, not knowing that she’s moving.

I wonder if she even knows she's doing it. Doesn't seem like she would be. #hyouka pic.twitter.com/vbXYIKFfpu

All this leads nicely into my thoughts on Eru Chitanda, the enigma. Despite all his (futile) protests, even Oreki seems to be mildly interested in her—wondering about her sense of smell, considering her supposedly airheadedness, and (most tellingly) allowing her to force him to pick the menu of life she recommends. And why? Because although there’s a faint aura of moe recognizability around her, there are likewise numerous hints at why she acts the way she does floating around. Consider the evidence: Chitanda…has an insatiable curiosity that manifests in relation to very small things, seems entirely unaware of the social cues Oreki is giving her, has twice blushed over the topic of romance, and is also a bit airheaded by some standards despite being a top student.

Clearly, Eru Chitanda was homeschooled. Okay, I’m joking, but having been homeschooled myself, I’m well aware of the stereotypical sheltered-from-the-world traits associated with homeschoolers—and Chitanda could be a textbook fit. But I don’t really think that’s it. More likely is that she’s simply not been exposed to much of the world outside of her family life and school. As such, she’s preternaturally eager to invest in the world and the people she meets in it; basically, she’s the antithesis to Oreki’s world-weary way of life. She’s internally motivated, but unconscious enough about other people to drag them along with her. I’d say, “Watch out, Oreki,” but there’s not chance he’s getting away, so…

And that’s about all I’ve got. I guess my final two thoughts are that Chitanda look lovely in a ponytail and Ibara will probably end up being my favorite character, but I think I’ll wait until Ibara gets a focus episode to really talk about her at length.

A quick housekeeping thing: how are people feeling about the essay style posts? There are so many little details in Hyouka that I sometimes feel like I’m leaving things about because they don’t adhere to the bigger categories I’m talking about. Time-stamped write-ups would give me the organization I need to be able to hit every little thing, but if these less-detail oriented and more detail inspired posts are working for people, I don’t see any reason to make the switch. Let me know if you have an opinion in the comments!