An episode in which Hyouka shows that it can not only be supremely delicate, sensitive, and elegant, but can also be a whole lot of fun. Unexpected, yes—but probably a wise decision after the subtle tension of the previous two episodes. If episodes 4 and 5 were a solemn navy, episode 6 was most certainly the rose-color Oreki so dislikes. But I’m not Oreki, so I liked this episode quite a lot!

Anyways, you guys have heard me talk before about how Hyouka can be a bit of a struggle to write about at times because a lot of cool stuff that happens in it is contained to small sequences of moments. They’re like little visual treats, playful excellence from the creators that don’t lend themselves to holistic, comprehensive analysis because they work so well as self-contained bubbles of intelligent writing, cinematography, and editing.

And perhaps it’s fitting for a lighthearted episode like this, an episode full of little rises and falls in tension and motion, that the majority of the episode was constructed of a seemingly constant chain of these moments. Unlike all the episodes prior, which each had a primary driving visual idea, Hyouka‘s sixth episode jumps around between ideas just like the conversation between the Classics Club jumps around to different subjects. Again, it’s very apt—but it doesn’t lend itself well to overarching analysis, aside from saying that, yes, it is the very distinct nature of the numerous visual tricks from each other that is the primary cinematographic “point” of the episode. With that in mind, I suppose I’ll pull my best Hyouka episode six imitation and jump around myself to the visual tricks I found most humorous, endearing, or clever.

It all starts within the first few second of the episode. The very first joke of the episode is actually a very self-referential one, as if Hyouka is well-aware of the intentionality behind its own cinematography.

It may not even really have been meant to a joke, but even so it strikes me a quite amusing—or perhaps, even better, revealing of Oreki’s character—that Hyouka would spend two shots (the first and second) establishing with explicit clarity that Oreki is bored, and then have him in the next shot verbalize that very fact. In terms of this being a joke, it comes across like Kyoto Animation and episode director Kazuya Sakamoto winking at the audience, going, “Hey, you see what we did there?” Alternately, Oreki’s just so bored that he’s resorting to monologuing his own boredom. Either interpretation works, but I personally like the meta-joke idea a bit better, so I’m going with that.

Next up: the first thing we encounter after the OP—Ibara and Satoshi’s extremely one-sided fight. Now, before I jump into the cinematography (which, frankly, is going to be an extremely short discussion), I should make a note on the character front. We learned in Ibara’s intro episode that she’s had feeling for Satoshi for quite a while, and it’s pretty easy to gather from all her yelling that the source of her outburst here is due to Satoshi standing her up on a “date.” Of course, they’re not officially dating or anything, so Satoshi probably didn’t necessarily do anything technically wrong, but of course that wouldn’t matter to Ibara. I’ll admit Satoshi’s behavior here—including his repeated dismissals of Ibara’s emotion—irked me (although probably there’s some level of projection going on there from me), but someone on Twitter generously pointed out to me that Satoshi, despite being a database, probably just doesn’t know how to deal with Ibara.

Which is interesting, because the cinematography frames this incident as something that’s very definitely Satoshi’s fault. We first get the shot on the left, in which we see Satoshi looking away from the camera at an angle, shadows over the right side of his face and on the table on the left side of the frame. Pretty much everything about the shot says, “guilty,” especially when contrated against the very next shot (of Ibara), which is more or less straight on and which lights her face evenly. Alternately (ah, such fun!), you could read this as the difference in how these two deal with their emotions—Satoshi’s obtuse and perhaps unwilling to show his own emotions; Ibara’s without any such qualms.

Incidentally, there’s also a lot to be said about the way Oreki diffuses the situation by asking Ibara if she’s tired and Satoshi’s quick reaction. Despite the tensions between these three, they definitely know each other well. 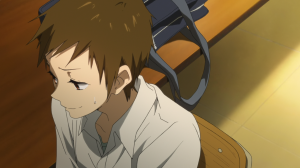 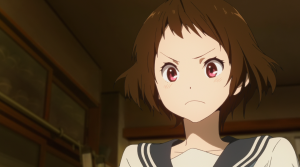 Jumping ahead a bit since the humor from the Chitanda teasing through the entire discussion about the Seven Deadly Sins is mostly character-based (like Oreki “getting mad” or Chitanda’s joke suddenly making her an angel in Oreki’s eyes being a reference to Satoshi and Ibara’s earlier joke about Chitanda being perfect), the next big moment comes when Oreki’s own casual curiosity—ironically—gets him straight into mystery hot water. What starts off with a the first balanced long shot inside the classroom (incidentally, long shots are used throughout the episode as a sort of “reset,” but I’ll talk more about that later [1]), quickly dissolves into a camera-dynamic, snappily-edited sequence that uses the funny-terrifying visual of little Chitandas to move Oreki quickly from curiosity to read to get the heck out of there.

The dominant feature, if you check the windows, is the yellow-green light that’s been associated with Chitanda since the very first episode (you see it carries through even to the wood of the table in the third shot), but the whole sequence works as effective as it does for two main reasons. One, this is solid character stuff, as watching Oreki walk right into the very thing he’s trying to avoid and Chitanda’s inevitable reaction are funny on their own. Two, the snappy editing and motion, particularly between shots four and five, which first display Oreki’s internal feelings visually and then, joined by a quick match cut, display those same feelings via his body language and facial expression—manifesting the abstract symbolism in human terms.

Not So Distant: The Episode’s Big Secret

There’s of course a whole lot more in between this moment and the final one I want to tackle tonight, but if I tried to get them all I’d never get to bed. This final sequence is probably the most important of the episode, as Hyouka shifts away from humor and dives into some suddenly deep character stuff. As Oreki muses on how little he actually knows about Chitanda—despite the two of them often being cut off visually from Satoshi and Ibara—we see him, in his thoughts, mentally make a division between himself and Chitanda. The backgrounds (pink, or rose-colored, if you will, for Chitanda; gray for himself) make clear that Oreki considers himself at a distance from Chitanda—as you can see in the post’s opening picture. Although he talks about “pride” as being the reason he can’t hope to understand her, it seems to me more likely that Oreki has just determined that it’s impossible for him to do so. It’s rationalization.

And that’s kind of funny, because just as they are about to leave the room, we get the following fascinating sequence: These three shots—which come sequentially—basically discredit completely everything Oreki has just been thinking about. And, now that I’m here, I’ve more or less realized that everything I said in those opening paragraphs was dead wrong. There was indeed a larger point to this episode besides just fun: to point out that Oreki and Chitanda actually share the same sort of close connection that Satoshi and Ibara do.

Holy crap. This episode was genius. And I’m just realizing it now. Wow.

Okay, let’s go through this slowly. To start, the first event of this episode was Ibara and Satoshi’s fight, and subsequent reconciliation over teasing Chitanda. As I observed while watching the episode, despite the romantic tension between them, Ibara and Satoshi are very much on the same page. They’re decently well-adjusted, mostly socially competent teens, which separates them a bit from Oreki and Chitanda’s respective brands of social awkwardness. The whole point of the fight, then, in context, is to demonstrate just how closely connected Ibara and Satoshi really are—something that’s shown through the way they’re shot together, even when they’re kind of at odds with each other.

Oreki and Chitanda don’t seem have the same kind of connection, but they do! [2] And, so, having spent half of the episode bring Ibara and Satoshi back together—and coming out of Oreki’s musing on how he doesn’t understand Chitanda even though he continues to demonstrate that, yeah, he actually does kind of get her, even it it freaks him out a bit—the episode basically concludes with the three shots above.

The first gives us Satoshi and Ibara, standing side-by-side in a medium length shot. Their relationship: together, stable.

The second gives us Chitanda and Oreki in a long shot, distanced from the other two and shown together in a relatively small area on the screen.

And the third pulls it all together, as we get what’s effectively a parallel shot to the first one. Medium length, nearly identical blocking, both characters looking the same way. They’re off in their own world, as per the second shot, but they’re just the same! They may not know it yet, but they’ve got that same sort of connection as Satoshi and Ibara.

To recap, this episode basically just used Satoshi and Ibara’s fight, channeled through a mere three shots of cinematography, to rebut Oreki’s attempts to distance himself from Chitanda. It’s like the whole episode—jokes and all—was building to these three shots.

EDIT: Looking back now, this is even more obvious. The episode structure itself is basically just did the same series of events repeated twice: first Ibara and Satoshi’s fight and reconciliation (via the “game” of teasing Chitanda); the Oreki and Chitanda’s fight (the will-you-won’t-you game over the mystery) and reconciliation (the solving of the mystery). And if you pay attention to who is the focus of the shot and who is observing in the background in each respective half of the episode, you’ll see the rolls are effectively the same—just reversed for each of the parts. That is, Ibara and Satoshi featuring in the first half with Oreki and Chitanda interrupting, and the reverse happening in the second half. Each couple has their own preferred way of interaction, and we see those methods play out in parallel throughout the duration of the episode.

[1] I didn’t get back to it. Just trust me, it happens more than just the instance I mentioned. Here’s another example (and it makes even more sense knowing the full point of the episode: 1, 2, 3, 4.

[2] Refer the the shots in footnote 1—they demonstrate, again, how Chitanda and Oreki are in their own world together (see the consistency in the visual code through the first three shots?) until Ibara or Satoshi breaks them out (shot 4).