It’s nice to have an onsen episode sometimes; I don’t think I could keep up the writing pace last week’s episode demanded for the rest of the show. That’s (of course) not to say that Hyouka entirely took the week off, only that the lower stakes of this week’s episode gave a little more breathing room to the cinematography and general character work—turns out Hyouka Lite isn’t so bad. As expected of Oreki, this episode’s trip to the hot springs/inn isn’t exactly his cup of tea (although he does consume at least one of those throughout the episode). As such, he spends a great deal of the episode bored—looking away from the people he’s with and around the area he’s in, as if eager to find some kind of stimulation. In one of the episode’s more overtly clever cuts (much like the cinematographic joke that opened last week’s episode), the very first shot depicts what looks like a *(1) ladybug on a leaf, seen through a window. However, as soon as the bus in which the Classics Club is riding begins to move, (2) the optical illusion is broken and we see that Oreki’s attention has been focused on this trivial insect rather than the people around him.

I don’t necessarily feel the need to make an evaluative judgement on what this says about Oreki, but it’s interesting to me that he chooses to focus on the ladybug rather than his friends in a situation where he’s mostly shut off from anything “interesting.” As the lines of dialogue captured in those two sceenshots hint at, though—”Hey, did you see that thing on TV yesterday?” “What thing?”—it’s perhaps the conversation itself that he finds dull, not necessarily the people. Oreki may be an intelligent kid, but it doesn’t seem to me that he’s all that capable of separating people who talk about things uninteresting to him from them actually being uninteresting people. Combined with his tendency to make assumptions about people (as an smart kid might tend to do!), and you have an easy recipe for disinterest. [1]

However, it’s not as those Oreki is entirely immune to all sorts of stimulation. We spend the majority of the first half of the episode pretty deep into Oreki’s sensory experience of the inn—hitting on sight, smell, and touch. From the concentration on what he sees early on to the olfactory sensations of dinner, we’re lead into the first scene at the hot springs. Remember again that Oreki’s spent the majority of the episode to this point bored out of his mind, amusing himself with games like trying to guess at dinner, so by the time he arrives at the bath his mind is most certainly searching for something to help occupy its capacities. Once again, his senses kick in, as he can hear (and, thus, visually extrapolate) Chitanda’s graceful movement on the other side of the baths’ separating fence. It’s a fairly intense moment (although certainly nowhere near as charged as the one that comes later on in the episode), and it’s amusing to watch Oreki’s mounting irritation with himself as his imagination runs out of control and eventually causes him to work himself into dizziness. [2]

And this leads me to a small side point. Hyouka‘s made a habit of using visually vivid, stylistically deviant images as it engages with the mysteries segments of its episodes. Up to this point, I’ve kind of just treated them as interesting visual treats from Kyoto Animation to help ease the necessary dialogue that accompanies each mystery. However, the timing of and intercutting between shots of the mystery and Oreki in bed (following from the established context of Oreki’s mental ennui) led me to wonder this episode if perhaps these are actually depictions of how Oreki imagines the mysteries in his head as he’s trying to sort them out. I dunno if I could conclude this theory definitively based on this episode, but thinking back it makes sense. I suppose the main barrier is whether or not that kind of mental energy is something Oreki would willingly spend…or perhaps he can’t help it?

I wrote “versus,” but Oreki’s interactions with Satoshi and Mayaka (I’m going with that instead of Ibara from now on because I think it’s cuter) this episode weren’t actually so entirely set in oppositional terms. While it seems that the change of location (and their respective ways of dealing with such a situation) is fodder for the sparks between Oreki and Satoshi to flare up more dangerously than they have in the past—see, Satoshi’s slightly more aggressive physicality and his occasionally irritated facial expressions during their verbal spats—there were also some moments that almost seemed like genuine friendship between them (and Mayaka, who’s non-friendly treatment of Oreki is the same as it’s always been).

The most noticeable moment, of course, came after Oreki got dizzy in the bath, as Satoshi not only helps him back to the hotel room, but also (with Mayaka’s assistance) gets the mentally frazzled Oreki into bed. In this moment, when Oreki’s sharp-tongued (arrogant?) guard is mostly down to his physical condition, suddenly we see and hear a lot more compassion and care from Satoshi and Mayaka than we’re normally getting. And that’s kind of cool. Maybe they don’t all hate each other all of the time after all! 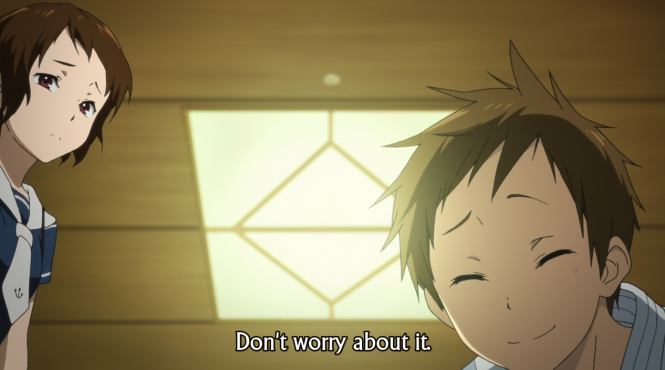 The final point, as you may have guessed by this point, is Oreki and Chitanda during the episode. Aside from the obvious sexual tension (entirely one-sided from Oreki, certainly), the main crux here was about siblings. It was a pretty cute choice from Hyouka to use the sibling-centric mystery as a vehicle for the larger conversation on siblings that Oreki and Chitanda have throughout the episode. While, on the surface, it seems that Oreki represents the cynical view of siblings while Chitanda represents a much more idealized view—and this is true in approximation, I suppose—there’s also a level of doubt introduced into the negative things Oreki says about having siblings due to what we’ve seen of his relationship with his own sister. Sure, she’s a pain to him, but he’s also gone out of his way (a big deal for Oreki!!) to thank her and keep in touch. It’s not all bad, and he knows it, even if we won’t admit it.

Either way, this is an interesting conversation for the two of them to have because they come from such different viewpoints. Oreki’s somewhat jaded by his own reality and Chitanda’s suspended by her own wants (and notice that wanting a sibling falls right into line with some of the visual characterization we’ve got of her as being isolated and lonely within her own home). But they’re still talking about this, despite the apparent opposition in their opinions. And it’s low key, fairly honest, and more or less unguarded. We see Chitanda’s disappointment at the resolution of the mystery poignantly as she stops in the speckled shadows of tree—the light of her dream mottled and blocked out in places by reality, and then restored as they see the inn siblings (backgrounded by the evening sun) helping each other. There’s a mutual understanding developing here [3], and even in Oreki’s stoic expression as Chitanda stares at the ground in the shadows displays a level of interest and care between these two kids that we haven’t seen before.

It’s capped by the radiant, sun-lit smile Chitanda gives Oreki right the end of the episode: these two are closer than ever.

[1] Notice Oreki’s smile as he posits that he’s been haunted by the hanging shadow. The first really interesting thing that’s happened to him on this trip?

[2] Notice the simplicity of the shots back in the hotel room—a strong contrast to the sharp visuals in the bath.

[3] Chitanda’s knowing, quiet smile (and her silence) as she and Oreki walk to the bath the second time—a mirrored shot from earlier in the episode when they were talking—demonstrates that she’s becoming more aware of when to just let Oreki be.