Ultimately, I think Hyouka is a show about what happens when people run into each other, meet each other, talk to each other, get in each others’ way, and—finally—change each other. It’s never a graceful process and sometimes it can be annoying and hard, but so much of the people we become comes from the people with whom we have contact.

This episode of Hyouka is about that.

But, because it’s Hyouka it’s about that in a really fun way—after all, it’s festival time! That’s not to say that Hyouka can’t be serious about people bumping up against other people (we saw that clearly in the film arc), but Hyouka is something of a jack of all trades, and so we get episodes where its serious and tough to watch and episodes (like this one) that are silly and joyful and generally a delight to go through—because watching people go catapulting into the lives of others with the energy that they do this episode can’t help but be entertaining. In many ways, you could say this episode (for the most part) is the “least serious” way Hyouka has of expressing this core theme.

A great deal of this particular iteration of the idea of people flying into the lives of others (unwanted or not, just like the changes they effect) comes through in the way this episode deals with the cinematic frame and the way the character interact with its borders. In this particular context, it’s useful to think of the frame as the primary subject’s personal bubble. The frame in which a character is the main focus is sometimes shared with another character evenly, but often in this episode of Hyouka characters burst ignore the edges of the subject’s frame, thus breaking into that character’s visual space (and its real life approximation, their personal bubble). The four images below are the most striking example of this: 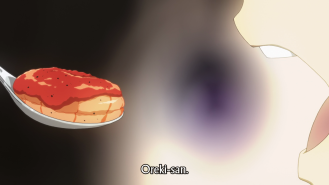 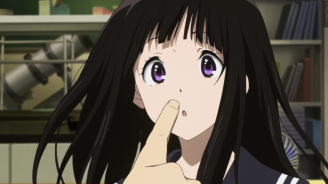 In the first pair of images, we see Oreki trying to eat in the foreground (and you’ll remember from the episode that he’s trying to shut down Chitanda and Satoshi’s attempts to get him involved in the Juumonji incident)—but he’s interrupted (quite comically) by Chitanda’s curious eyeball literally coming between him and his food. She’s not entering from outside the frame per se, but blurring her out in the first image makes clear that she’s not the original primary focus of the shot. In the second pair, Oreki turns the tables after being visually “harassed” through most of the conversation prior (whether by character blocking actually covering him up or by sneaky minor intrusions into the frame). As Chitanda goes in for her signature line, Oreki’s hand sweeps into her frame, invading her visual space and cutting her off.

And lest you think it’s just Chitanda tormenting Oreki, it’s not. It’s Satoshi, Satoshi and Chitanda together, and even Mayaka (although hers comes later and only at provocation). But, as pesky as these intrusions can be, they also inform a certain level of human connection. Not all relationships are easy and casual and tailored specifically to our own expectations or desired, but they’re still important because of the meeting of humanity they represent. 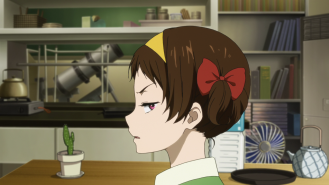 But people aren’t always connected with others. Sometimes, we’re off on our own, doing our own individual things. This isn’t quite the same as the classic example of being alone in a crowded room (although we have that too this episode). Rather, it’s the good old loneliness of existence thing—the separations that dwell between us as distinct beings, with our own thoughts, problems, and desires. Sometimes we block people out, sometimes we do it to ourselves.

If the bulk of this episode was about the connections between people, the rest of it was about those divisions. With the episode so rife with people bursting into frames (and with in-your-face solo frames, of which Tani-kun is the king), the isolating shots of individual characters stand out all the more. The obvious occurrences are at the end of the episode, as Chitanda, Mayaka, and Satoshi are each wrestling along with their individual issues, but there are a number of standout moments along these lines scattered within the episode proper.

To me, it’s not surprising that the most noticeable of these comes from Satoshi. After all, Satoshi’s personal visual codes for negative emotions (his recurring jealous of Oreki, in this case) have been set up for a long time. Shot 1 visually foreshadows it all with the unbalanced composition and  use of negative space on the right side of the frame. That negative space is maintained throughout the next three shots, emphasizing that this moment is only about Satoshi and using the move from a medium close-up to a close-up to indicate how interior and personal Satoshi’s thoughts have turned. Once again, his jealousy of and desire to measure to Oreki’s particular genius—and, as the end of the episode shows, he’s struggling mightily with accepting the good he sees in that and the insecurities it raises for him.

All this follows a scene where the Classics Club has been working together—a somewhat solemn reminder of how closely the things that divide us from others existing next to the things that bring us together. Of this particular point, it turns out that Mayaka’s time in the Manga Club (she’s really taken an emotional beating this arc and I’m still sad about it) is the best example of that. We don’t know what exactly it is that caused Mayaka to end up so isolated from the rest of the Manga Club, but the details don’t matter quite so much as the fact that in the midst of the drama and petty bullying she’s found an unexpected ally in the previous belligerent Ayako, whose own shots continue to be notably self-contained and steady. It’s that same independence and distance she keeps from the nasty Vocaloid cosplayers that allowed her to go after Mayaka last episode and allowed her to shut down the bullying, united with Mayaka via the manga they both know and love. Of course, this isn’t quite solid enough a connection to really make Mayaka feel any better, and so she flees to the bridge. It’s isolation and disconnect still, but at least it’s self-imposed, right?

Let me conclude by saying this: no more Mayaka tears, please. I can’t handle them when she’s a fictional character and I can’t give her a hug. Let us instead think of Mayaka in happier times.