So, we’ve arrived at the penultimate episode of the Kanya Festival arc and the answers to all the mysteries are starting to slowly unveil themselves (some courtesy of Oreki). The Classics Club is still functioning as four separate units, but their moments of togetherness are starting to outnumber their moments of separation. Of course, that doesn’t mean everything is smooth sailing…

I sometimes feel the temptation to say about episode of Hyouka, “Well, this episode was all about X character,” but I can’t really do that here. Whether it’s easy for me or not, this was an episode about the entire Classics Club, and about the events (both self-caused and not) that have moved them to their places for the ending of this mystery. It’s about Satoshi’s ongoing insecurity, jealous, and hope. It’s about Mayaka’s endurance and inevitable giving up. It’s about Chitanda’s persistence and courage. And it’s about Oreki’s unique genuis, and how he chooses to use it. You just can’t talk about any one of these character at the expense of the others—so I won’t attempt to do so.

It’s interesting to me that the Jummonji incident has all but consumed Oreki and Satoshi’s Kanya Festival experience, while Mayaka and Chitanda have maintained outside concerns. That’s not to say the girls aren’t interested, but unlike the boys (Satoshi in particular) they don’t have a ton riding on the solution to the thefts. But even between the boys things aren’t the same. It’s clear that Satoshi has a level of emotional investment in solving the case that Oreki just doesn’t. For Satoshi, this is both something that has piqued his curiosity and a type of weird proving ground. For Oreki, it’s just something.

I’ve mentioned before that Satoshi and Oreki basically represent two different responses to the same experience of boredom—Satoshi throws himself into everything trying to find stimuli while Oreki has given up. The differences in their approaches are naturally going to frustrate Satoshi, but he also can’t stay away from Oreki because Oreki has everything Satoshi wishes he had.

In this particular case, Satoshi’s initiative and motivation is actually working against him, affiliating him with a bunch of dudes who are clearly his intellectual inferior (notice how Satoshi reacts to Tani and the other wannabe detectives with the same sort of disinterest that Oreki applies to most everything). We’ve already seen Satoshi burned once by rushing ahead with the magic show, and once again his desire to accomplish and succeed sets him up for disappointment—and not just with the mystery, but with himself.

At the moment Satoshi learns he’s messed up again, we’re thrown into his whirlwind of emotions. The moment of realization comes with a canted angle (a “twist” if you will—shot 1), which is quickly followed by a series of shots that work in halves (2, 3, 5, 6) and one shot with the weird darkened half-light that automatically clues us into when Satoshi is upset (4). In essence, the four shots that split the screen between incomplete (just like his deductions) of Satoshi and negative space echo the familiar half light/half shadow of moments like when he glumly states that “Now we’re back to square one.”

Contrasted with Chitanda’s full-on moments of excitement or gloom (Chitanda frequently consumes whole frames on her own), it becomes apparent just how fragile a person Satoshi really is. If he is a person of halves, Chitanda is one of intense wholes—and she drags everyone else along with her.

This episode, that’s something we can really be grateful for, as Chitanda’s stubborn enthusiasm about “A Corpse by Evening” carries Mayaka away from the ugliness of the Manga Club (no moment this episode was as painful as the 5 second take of her walking across the entire screen after being splashed with the dirty water). Chitanda saves her (resolving the accompanying visual tension), bringing Mayaka back to something she loves and uniting their respective curiosities.

So, that’s the parallel for the girls: while the boys are busy with the Jummonji incident, the girls are caught up on “A Corpse by Evening,” a no less important part of the puzzle—both in terms of the plot and in terms of their personal arcs. But, again, we’re seeing a disconnect between these characters arise. As much great humor as their is between Chitanda and Oreki early in the episode—you just can’t beat the sound effect normally associated with Chitanda’s, “I’m curious,” ringing at the moment Oreki catches an unexpected glimpse of the barest hint of her cleavage as she tries to take the manga from him (or the fact that he instantly looks at Satoshi as he recoils)—there’s also a significant amount of tension that arises, too. 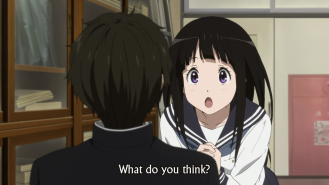 The first comes as Oreki is puzzling on the mystery while Chitanda is trying to prep for her radio show appearance. As good of friends as Chitanda and Mayaka are, it’s still Oreki that Chitanda looks to first—and his focus else obviously hurts her feelings. But that’s just a small occasion compared to his dismissiveness of her curiosity about the Jummonji incident when it comes back up. Oreki resolves it with a little lie that turns into a good joke, but it’s interesting to note that this particular hurt he’s caused is much different than the unconscious pain he’s always causing Satoshi—this is Oreki on his own path, with his own interests for the first time. And Chitanda doesn’t need to factor in.

This leads us into the final scene of the episode, and the most important: Oreki and Satoshi’s second bridge conversation. All Satoshi’s normal visual cues that accompany his conflicted feelings about Oreki are back in force, and the parallels of the situation (one-on-one, talking about a mystery on the bridge) highlight the differences similarities. They may be on a bridge, but this time Oreki’s far more in control and level—while Satoshi seems to be just as disturbed and troubled as before. The scene’s far too difficult to talk about in paragraph, so check out the gallery for comments on shot.

Satoshi’s horror at the suggestion that Oreki is, once again, on a different track than he is becomes immediately apparent with the extreme close up and the darkened lighting. We’ll see this lighting scheme all over the place in the coming shots. 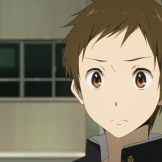 We even out, but this shot is NOT from Oreki’s perspective. Satoshi is almost always engaging Oreki from his own place. 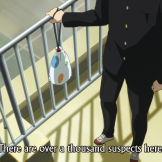 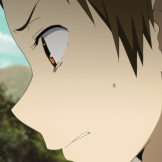 (1/4) This has shown up before with Mayaka, but the negative space in the frame invites (or compels) Satoshi forward.

(2/4) The cuts are extremely quick here (half-second long takes, if not less). And they all progress in motion from right to left. 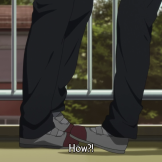 (3/4) The quick cutting adds a feeling of disjointedness, urgency, and near-violence to Satoshi’s movement as his desperation breaks through. 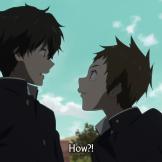 (4/4) And the shots have become progressively darker—not just in lighting, but by the time we get here, the black of their uniforms has made the entire shot dark.

This is a throwback to their first bridge conversation; Oreki is once again stunned and confused by Satoshi’s outburst. It’s one of the few times he really engages with Satoshi. 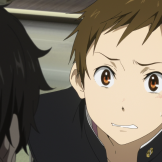 And the high-angle doesn’t treat Satoshi well—all his insecurities and agony are out to see, plain as day in the returned bright light. 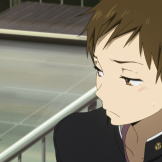 But that’s not him. He’s got to look away.

And, as he does, as the intensity of their interaction lessons, the camera pulls back to a medium long shot, resetting the encounter with an even, balanced composition.

And then, we see Satoshi reset himself. No half-lighting. Just calm.

This falls out of the cinematography talk for a bit, but Satoshi is eager and willing to hand Oreki the things he’s picked up. After all, Satoshi is a collector—not a detective. 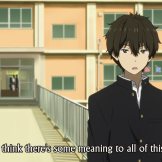 (1/2) What are sort of the closing shots of the scene parallel Oreki and Satoshi for once.

(2/2) Despite everything, there is some balance in their relationship, even as light floods Oreki’s background and shadow covers Satoshi’s.

And as for the final moments of the episode, before the comedic outro with the Tarou Takanashi-voiced Broadcasting Club president and Chitanda on the radio show, I don’t think I can really break it down any better than I did on Twitter. So, here it is—the real, complicated, painful crux of Satoshi’s relationship with Oreki. It’s sad, it’s kind of dark and kind of light.

These are the painful complexities of growing up. Of being human in relation with other humans.

Satoshi's jealous as hell of Oreki, but he also can't help but see Oreki as a light out of his own ennui. #Hyouka pic.twitter.com/OYuhCEV7Cq