In an episode where Hyouka switches up its normal format—instead of solving a mystery himself, Oreki has to create a mystery that someone else can solve—it’s appropriate that we also see a shift in terms of the stakes of the episode’s events. Where heretofore Hyouka‘s mysteries have been expressions of interior character realities, in episode 20 (which is really the precursor episode to the finale, in many ways) we see and feel the outside world starting to creep in on the comfy lives of the Classics Club. 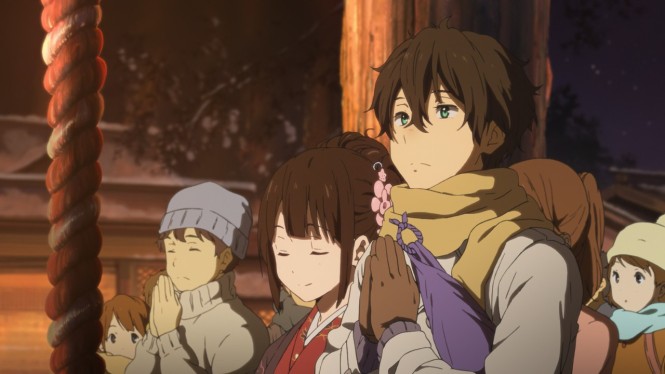 After episodes 18 and 19, two of Hyouka‘s most intimate and most isolated episodes, episode 20 comes as fascinating reversal. While we see Oreki and Chitanda out together in the world in episode 18 (at the library), they’re partitioned off from the rest of the world by their single-minded focus on the mystery in front of them and the deeply personal motivations that are animating both of them. And in episode 19, we see them return to the quiet bubble of the Geography Prep room—alone, and comfortable. Episode 20 is nothing like that.

It kicks off with a pre-OP bait-and-switch (one carried over from the episode preview), as Chitanda and Oreki’s conversation falls into the same kind of familiar patterns as we’re used to hearing from them and the deliberate, delicate paralleled close-up shots lend a sense of intimacy and closeness to the scene despite their talk of being in a mess. From their chattiness, the cinematography, and everything that’s come before, it’s easy to assume Chitanda and Oreki have found themselves in a small pickle together, one with low stakes and with a lot of potential for them to again grow closer. And yet, despite the fact that the trap of the warehouse bears some similarities to the self-sustaining box of their club room, in reality it’s a threat due to being a single piece of the larger organism of the shine—as well as all the social realities suggested by this tradition-laden place. 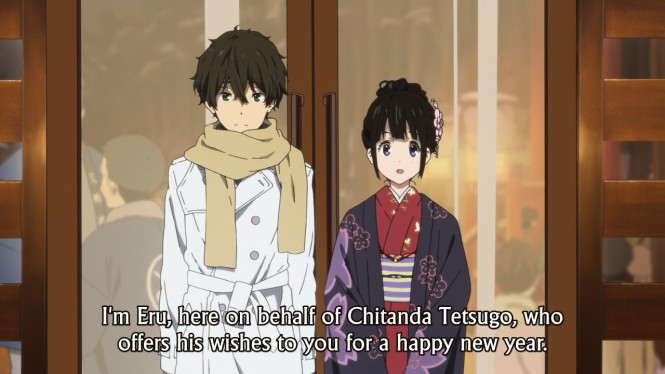 In fact, it’s these social realities—the pressures of status and tradition—that are the invisible, constant presence in this episode. From the moment Chitanda appears for the first time, we understand by her traditional dress and her arrival via taxi that this is a different kind of Chitanda than we’ve seen (particularly in contrast to the playful, giddy Chitanda of the previous episode). And it seems Oreki understands this, too, as this new (or, perhaps, old) Chitanda walks towards him in soft pink light, her motions depicted through the ghosted animation that will recur in a few episodes—and he sees her not as a whole person, but as pieces of a slightly unreal being. Unfamiliar, but enchanting.

This version of Chitanda is not just Chitanda herself, but the Chitanda running errands, representing her father, and the Chitandawho will stand on the propriety of the day, even if she can’t help but show off a little bit at the same time. Chitanda is, appropriately, an embodiment of the real conflict of this episode. She is the tension of her social responsibilities pulling against her free, fun-loving, mischievous nature as represented by her special relationship with Oreki. People may pass out of their frame at one moment, leaving them alone in their own world for a moment, but in the very next cut we see them as they really are—surrounded by people once again, by the world they both live in.

Oreki’s participation in this world is unnatural for him. He doesn’t understand it, and verbalizes as much multiple times throughout the episode—and is, further, frequently visually distanced from Chitanda as she engages with this world. The formalities and ceremonies of the New Years’ shrine visit for the daughter of a family of status are all unfamiliar to him, even as he encounters them. The above gallery is on such example of this, as shrine maiden Kaho Juumonji’s entrance (and Chitanda’s subsequent interaction, puncuated by shots of Oreki looking in from the outside) is dominated by shots focusing on the physicality of the ritual, a very Hyouka-like way to express the slight exoticness of the tradition. And yet, when Oreki joins in (shot 6), he is momentarily swept into the ceremony’s focus on small, precise motions. But immediately after, as he’s isolated by the joke Kaho and Chitanda share, he’s back to being an outsider.

All this serves to recontextualize the pre-OP sequence within the confines of social world Oreki has unwittingly inhabited by his association with Chitanda. Thus Chitanda must help him understand the situation when he’s about to yell for help. Thus Oreki struggles not with just the challenge of their situation, but against the rules and etiquette of Chitanda’s world, as well. The intimate box of the shed, with all its echoes of the comfortable closeness of their Classics Club games, brings with it stakes because of its association with the world outside. This presence—symbolized silently in the episode’s first half by the ever-present crowds—has become real and important. They may be split off (just as in this shot that repeats the corner of the room shot so common in the classroom), but they are no longer alone together. Even trapped inside the shed, they are further ringed in by the outside. 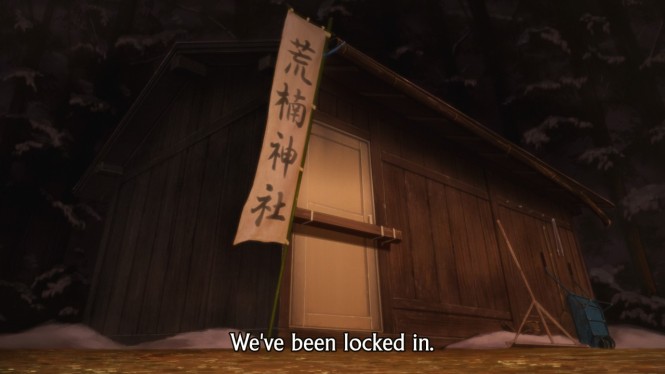 In the end, they’re saved from scandal by a strange connection between Oreki and Satoshi (via Mayaka). Their (or, really, Oreki’s) showdown with the forces of traditional society is postponed—but only postponed. Oreki now understands Chitanda a little bit better than he did before (another turn from episode 18, wherein Chitanda came to understand Oreki more), and he’s caught a glimpse of the wider context that surrounds this girl. And so what will he do with that?

That remains to be seen.

[Final note, a word on outfits: Mayaka looked lovely in her shrine maiden clothes, Chitanda’s kimono really was stunning, Oreki’s coat is cute, Satoshi is apparently not bother by the cold at all.]