In a real season of anime that isn’t as stupidly stacked as this one this, a lot more the premieres I check out that usually flop so I can leave them behind without feeling bad. This season, some of the cuts I’m making to my schedule feel like chopping down a sapling before seeing what kind of tree it will become. 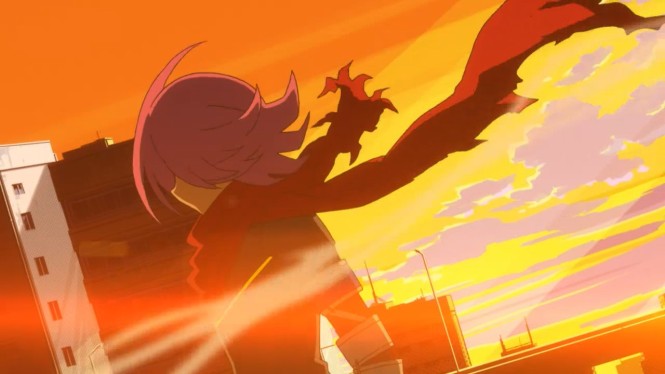 As with the first installment of this season’s first impressions, I’ll start with the obvious winner: Concrete Revolutio: Superhuman Phantasmagoria – THE LAST SONG. As you may recall, Concrete Revolutio‘s first season was both my favorite show of the Fall 2015 season and my top anime for all of last year. It’s an intelligent, thoughtful, and sharp-edged musing on a gigantic pile of issues relevant to human cultures in general, but also a deeply emotional and personal character-driven story just as capable of delivering poignant character moments as it is grand (or, perhaps more appropriately, grim but hopeful) ideas about what is means to pursue peace, justice, and just doing the right thing. I didn’t really have any worries that this season would fall apart or fail to live up to the success of the first one – like Rakugo Shinju last season, Conrevo now exists in a plane where I trust it fully and without reservation.

This premiere was just proof of that, kicking off this season with yet another one of those emotionally draining, thematically rich kind of episodes only Concrete Revolutio is capable of achieving. There were quiet and more pronounced callbacks to the events of last season, a whole bunch more of Shiba’s compelling personal struggles, the reveal that the Bureau Chief is still alive and now paired with Jiro, cool action, and just another reflection on the same themes Conrevo‘s been wrestling with all along. In short, it was really excellent and left us with great hope for the rest of the series. 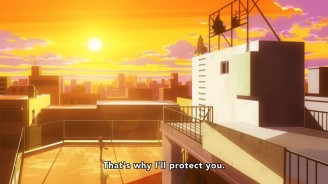 The other elephant in the room is obviously Kabaneri of the Iron Fortress, the new show from the director of Attack on Titan and very clearly the new show from the director of Attack on Titan. However, in my opinion, Kabaneri is already better than its predecessor for the simple reason that it appears to have actual female characters (potentially in lead roles??), which I’m aware may be a slightly controversial opinion to have. As for the rest of the premiere, I had more fun with it than I expected without having to drift into watching it for comedic purposes. There’s just enough weight to things here that I’m willing to take Kabaneri seriously for now. My main concern for the show is that it’ll get bogged down in overwrought drama between the brave zombie fighting crew that the OP promises and the fearful, conservative establishment. In other words, the more action and the more bigness Kabaneri has, the better it will be. Do the right thing, Araki.

Elsewhere in “fun but possibly insubstantial” land rests the final BONES premiere of the season, Bungou Stray Dogs. My expectations for Bungou were actually relatively unambitious—all I wanted was for it to be fun, pretty, and potentially cool, and it managed to do all three. There’s really no sense of story here at all yet (and perhaps there won’t ever be), but that’s fine by me because these kinds of supernatural comedy anime generally work pretty well for me (see Blood Blockade Battlefront, a show with plenty of obvious similarities to Bungou). Aside from Kunihiko Ikuhara protege Takuya Igarashi’s pretty lighting-based direction and frequent collaborator Yoji Enokido’s writing, the biggest staffing headline here is Mamoru Miyano finally taking another true lead role – because holy crap Miyano is a very good seiyuu and I like listening to him. Bungou‘s overall more of a crapshoot as to whether or not it’ll actually stay good than BONES’ other shows this season, but it’s got enough going for it for now for me to feel optimistic.

It’s interesting that my two slice-of-life comedy picks for this season both ended up airing on the same day and both hit the same sort of tone. Of the two, Tanaka-kun is Always Listless was actually the one I was looking forward to most – and it wound up being the stronger offering of the two as well. The dozy lovechild of One Week Friends and Non Non Biyori (and directed by the latter’s director), Tanaka-kun is infinitely pleasant and cozy, embodying well the sleepy mood of its eponymous lead character. There’s already an easy, comfortable relationship between Tanaka and his friend Ohta, and the side cast look to be both cute in design and appropriately well-matched in personality. Everyone in Tanaka-kun is cheerful and kind, so it should be a delight to see them all come together as friends. And as a closing note, I’d be remiss not to mention that Tanaka-kun‘s OP-ED combo is easily the best this season.

Flying Witch is my other down-to-earth slice-of-life comedy for the season, and while I don’t think it’s quite as well directed to atmosphere as Tanaka-kun is, the family themes and the rural setting seem like they’ll present opportunities for Flying Witch to have much higher overall ceilings than its fluffy Saturday compatriot. As with Tanaka-kun, Flying Witch does a really good job of not overselling its jokes, leaving the comedy as a second priority to maintaining a warm tone. Even the more absurd or fantastical bits (like Makoto pulling out the mandrake) still perpetuate a quiet sort of attitude towards its overall execution. I’m not quite as sold on Flying Witch‘s main cast as I am on that of Tanaka-kun, but the lack of established relationships here means that makes sense. I’m looking forward to seeing this group slowly grow closer. And to more witch activity. 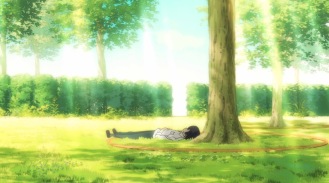 The last show that’s made my Spring watchlist is Mari Okada’s collaboration Studio Trigger, Kiznaiver. Okada and Trigger are two entities who like to loudly make their respective presences known within the projects they tackle, and Kiznaiver is no exception on that front. From the first post-OP scene being totally full of classic Okada dialogue to Trigger’s distinctively cartoony approach to character animation throughout, it’s quite a sight to see these two bullheaded creative forces coming together. After this premiere, I have some doubts about whether the Triggerisms (the Kamina clone, the Nui clone) can coexist well with the angst-filled setting Okada has created here, but that doesn’t mean I don’t think it can all work.

Aside from artistic influences, Kiznaiver also seems to be the most conceptually rich show I’m watching this season after Concrete Revolutio and Macross Delta. Okada has always been obsessed with material that deal with the relationships between people and the difficulties of understanding others (heck, even Mayoiga, as dysfunctional it is, riffs on this theme), and Kiznaiver is possibly more laser-focused on this idea than anything else she’s ever created – although through disparate fractured perspectives. Empathy and understanding have been taken out of the abstract and made painfully real in Kiznaiver, and I’m really hoping Okada can keep herself on-task enough to come up with some real emotionally resonant stuff and intelligent reflections on this theme. Cross your fingers, friends! 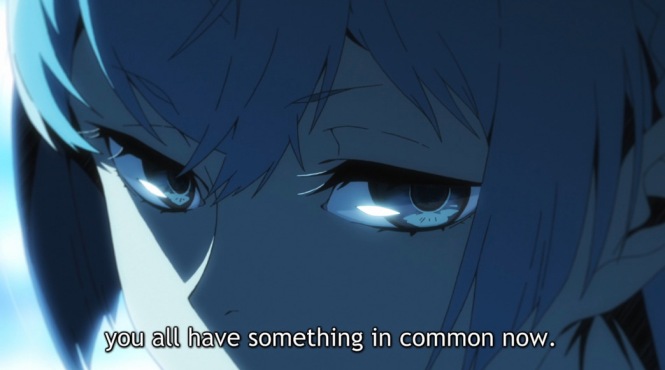 As I mentioned at the beginning of the post, this is a big season. Too big. After really falling off my blogging pace following the completion of my Hyouka write-ups, I’m really starting to feel jittery about how lax I’ve been about my posting. I want to change that. And so, some shows, most of them strong enough that I didn’t really want to drop them, had to go. The following didn’t make the cut:

Out of the last post’s batch, Joker Game, Bakuon!!, Twin Star Exorcists, and Pan de Peace all hit the drop pile. Again, none of these shows had particularly bad premieres and I’m not dropping any of them because I didn’t care for them (Bakuon!! in particular was hard to let go), but I had to prioritize. I might still try out Dogokobo’s Three Leaves, Three Colors, but chances are good this is my final watchlist.

Let’s have a good season!