We’re totally gearing up for a big midshow climax, and I am completely emotionally prepared (no I’m not). 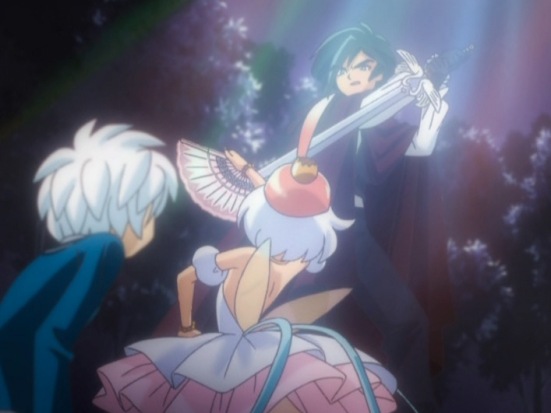 At this point I cannot imagine any of this ending well for Rue in the short-term, and certainly not in any sort of way that she’ll actually be happy with. She wins the first kiss and achieves her goal, but (if we’re going by Drosselmeyer’s categorizations) she’s a villain without resolve – and resolve seems to the currency of choice right now in Princess Tutu. At this point, everyone has at least a little bit of it: Duck’s overcome her episode 6 doubts thanks to Mythos’ own decision to recover his heart, while Fakir is struggling to put his fears behind him to become a knight for Mythos and Rue is trying to convince herself that she can really be as entirely ruthless as Kraehe.

Rue is really the wild card here (at least until the deck of the story gets shuffled up again), because she’s not really evil – just jealous with love, and afraid. This idea of overriding even Mythos’ wishes because she loves him so much and wants to possess him… resisting change… in Mythos and even in herself (how long does Rue reject the idea that she’s anyone besides herself!)… change is scary, especially when you’re not in the driver’s seat the way Tutu and Mythos are trying to be.

Fakir more or less goes with the flow (which takes some courage on his part), recognizing he can’t stop what’s coming. Fakir is a good boy who likes ducks. Princess Tutu is out of shipping territory for me, but there’s something profound in the kindness he shows to Duck in her duck form. It’s different even from his affection for Mythos, less guarded and less performative. More genuine. 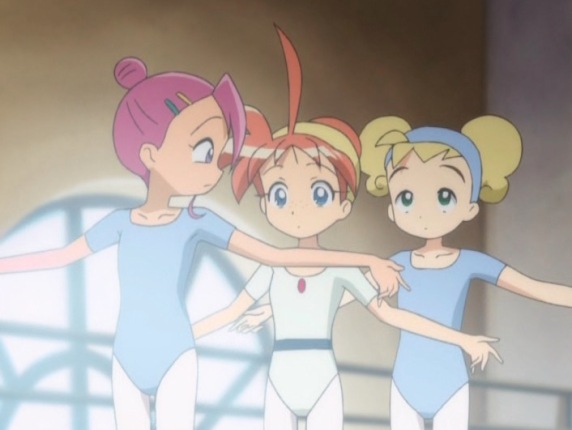 Princess Tutu is not episodic anymore in the way it was earlier, the shakeup at the end of episode 6 has spun the story into an entirely new sort of thing. This, I think, is significant because it echoes the themes the show’s starting to play with. Roles, and expectations, and structure, etc. This is especially noticeable because the heart shards continue to recur as an element each episode, but they’re no longer the focus as the four leads have come to take up more and more of the screentime.

By breaking away from the formality of strictly dictated episodic conflicts (and sure, each episode is fairly self-contained, but this is definitively not like the mahou shoujo-esque formation of the early episodes), Tutu as a story is resisting being confined within forms handed down from a greater power (genre, or the storyteller!!) – just as it appears to be positioning the characters to break out of the parts Drosselmeyer has established for them. Tutu, Mythos, Fakir, and Rue all exist so obviously within their established archetypes, but although Drosselmeyer rejoices over the ways they also don’t play to type (duck, clueless, fearful, uncertain, respectively) because of the drama is creates, those same breaks risk the story’s ability to adhere to the designed path. Um, how does it go…

Also, everyone is out to everyone else. Aside from Duck being a duck (and maybe Fakir has figured this out? maybe?), they all know who the others are, which means that their “real world selves” and their “story selves” can no longer be differentiated from each other. The classic mahou shoujo veil has been lifted. This is interesting in multiple ways, not the least of which is the possibility of reverse impact. Thus far, it’s mostly been the “real world selves” dramatically affecting action in the story, but what about the latter? It’s already happened a few times. When will Rue as Rue chuck Duck into a fountain in a fit of jealousy and suddenly reveal her duckness to the world? 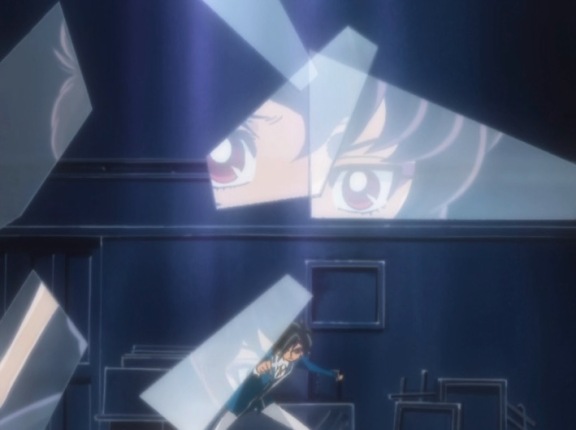 Duck is wonderful, but I just feel bad for Rue all the time…which makes her my favorite, I guess?