Not all small things are pretty. In fact, some are petty. Like Konosuba‘s Aqua.

This post is the second of my entries into 2016’s rendition of the 12 Days of Anime aniblogger project. For more about the project, read appropriant’s introductory post. For a spreadsheet containing the work of all the bloggers participating, go here. For my previous 12 Days posts, go here.

Pettiness lies at the heart of Konosuba‘s setup. Aqua’s petty verbal abuse of Kazuma causes his petty retaliation against her, and an ignoble preoccupation with the self lies at the heart of both of their characters. But while Kazuma’s pettiness winds up paired with frequent positions of relative power (leading to him feeling more like a jerk than anything else), Aqua’s is paired with the triple threat of haplessness, spats of depression, and a need to be liked and useful despite her seeming inability to be either.

Pettiness is not a character trait I believe is admirable, but it is one I find particularly appealing when displayed in fiction. Characters who are tied to small, personal, and ultimately inconsequential concerns (which often find themselves tied to the bitter chain of lacking self-confidence) are characters who are also gloriously human. To show pettiness is a small thing—and in Konosuba, it is buried underneath sarcasm and recognizably millennial angst and perviness—but it also expresses a truth. I love the idea of defeating the demon lord for the good of the entire world as much as anyone (a grand and philosophical noble aim, to be sure), but the fact is that the concerns of most of us lie more in the realm of fetch quests, if you’re Konosuba, or the minutiae of our selfish internal desires, if you’re a character in a Mari Okada anime.

Her show as a whole does this, but Aqua in a special way, I think, gives voice to this small pettiness of humanity. Whether it’s the gleeful way she takes advantages of chances to abuse Kazuma or her pathetic pleas for him to lend her money, her demands to be respect despite rarely doing anything worthy of esteem or oft-swollen ego, Aqua lives a truly glorious life of pettiness—and is, aside from brief moments where she displays her literal divinity, generally the worse off for it.

I find it rather interesting that Aqua is largely reviled by fans of Konosuba, but perhaps it makes sense that it is Kazuma who is worshiped as a God by views rather than the true goddess of the show. Again, Kazuma’s pettiness is often joined to power and success—he is usually rewarded (or at least goes unpunished) for being a generally nasty human being. On the other hand, Aqua is eaten by frogs, locked in cages assaulted by alligators, constantly in debt, and otherwise a disaster. Her pettiness as a person is joined with weakness and failure—and perhaps it’s obvious why her brand of littleness is less appealing in comparison. But she also, I’d say, runs closer to the truth of the matter.

Aqua’s appeal goes deeper than just her pettiness for me (it takes more than that for me to identify so strongly with a character that I’d want to make them the foremost symbol of my online presence), but the presence of that trait is a critical one. I try hard not to be a petty person outright. Despite that, though, the impulses are with me constantly, as I expect they are with many others. I flare internally at perceived slights, attribute failures of my own making to others, crave affirmation without giving anything myself. And so, seeing Aqua act externally out of the same impulses is something I find almost cathartic.

“Ah, yes, that is me. However others perceive me, I can recognize the bumbling, selfish, mess of a person I often feel inside in this dumb goddess. And yet… despite all that, shreds of goodness peek through every so often. And yet.. despite all that, at our cores, this prick of a blue-haired deity and I also possess the self-confidence, groundless as it may often feel, to pick ourselves up and out of the disarm we inflict upon ourselves. We’re small and dumb, but we carry on.” 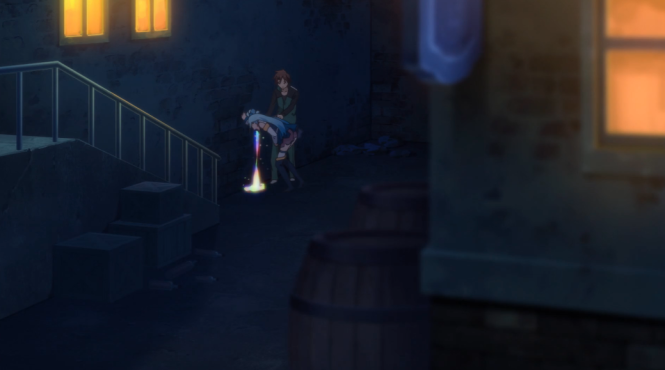