“Inspiration” seems too weak a word.

This is the eleventh of my entries into 2017’s rendition of the 12 Days of Anime aniblogger project. For more about the project, read appropriant’s introductory post. Please also check out the spreadsheet containing the work of all the bloggers participating!

Who You Are, What You Create

I can’t remember a time in my life when I didn’t want to create things. While I have few memories of many things from my life as a child, many of the stories I wrote—etched out in a pre-teen’s handwriting on lined notebook paper—are still with me. I haven’t forgotten those characters, those clumsy attempts to iterate on the plots of video games I’d played or books I’d read. And the core impulse, while one that has since developed to desire expressions of originality or inspiration rather than imitation, has remained with me my entire life. To create.

After I finished Saekano♭, I spent the next two weeks with what felt like a fire in my stomach. It was hard to focus on things that weren’t creating (or practicing so I could create), and I dropped off on other hobbies to spend more time on my art.

It’s funny, isn’t it, how we make these sorts of connections with fictional characters in fictional worlds? By superficial estimations, Saekano was nothing more than another run-of-the-mill harem show (it’s at least at times a little more than that), and Eriri Spencer Sawamura just another in a long line of tsundere childhood friend haremettes. Perhaps this is the hidden redemption of harem anime, that as their effectiveness as fantasy girlfriend parades fades, what may emerge are characters who can stand on their own and offer the value of their own interior realities for us to admire and be inspired by. 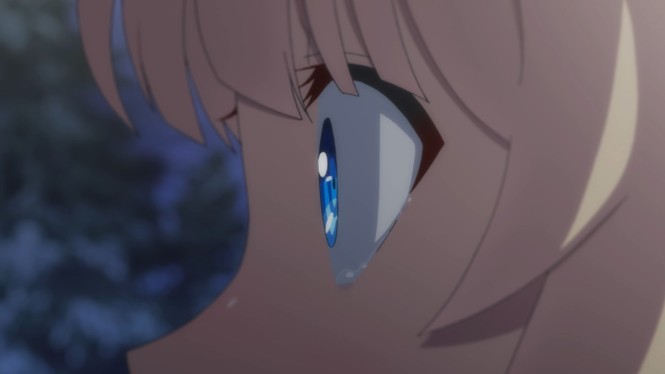 I can barely articulate this. An in-depth analysis of Eriri’s character seems too ponderous, too detached. To describe my attachment to her on a personal level feels like an exercise in futility, a cheapening of the feeling through my own inability to express. So maybe it’s enough to describe the effects of watching Eriri staring out into the snow, Eriri arrogantly apologizing, Eriri burned out in the wake of her artistic heroism, Eriri furious at her humiliation at Akane Kousaka’s hands, Eriri blossoming before Utaha’s eyes, and exploding out of her constricting history. It’s not really about Eriri’s relationship with Tomoya, but with her coming to terms with her own ferocious talent and the insatiable demand to create that burns inside her. In the end, she finally understands. She understands her own need to create, not for someone else, but for herself. As for me…

… the fire of Saekano♭‘s immediate aftermath diminished in time, but the embers never went out. I’m preparing to go back to school to start an art degree and pursue in earnest the dream of creation that has followed me for so long. I intend to take myself and my own creative impulses seriously. It strikes me that saying so here on this blog is somewhat ironic, because these 12 Days of Anime posts may very well be the last I write as I commit to doing this for real. I detest hyperbole in describing the effects media have on our lives, so I won’t say my life has been changed. But it may very well be that one day I look back at Saekano♭ and realize how much began with this show. I don’t know what will happen, but I hope it might be something like that.

In the final episode of Saekano♭, Eriri says something to Utaha that more gracefully sums up a lot of what I’ve been trying to say. She says:

“We’ve sacrificed too much not to take this seriously.“

Invert this idea and you get, “To take something seriously means to make sacrifices.” Of course, the idea that artists must give up on financial security, personal relationships, and good health to truly do art is an insidious one (and one that that Saekano♭ toys with in Eriri’s second arc), but in general this idea isn’t wrong. Whether it’s time, money, or simply opportunities passed by, to commit to something means to give up on other things. Eriri represents all of this at once: The pain of sacrifice and the rewards of what’s gained in exchange.

I would like to do that as well. So I’m going to try.

Even after so much effort expended in trying to express my thoughts here, I still feel I’ve failed in my description. Oh well. Failure is part of all this as well.