In lieu of a traditional review, I have opted to take a different approach for Noragami. It really is fascinating to see the overlap between different religious traditions. Noragami, with its (mostly) Shinto-based characters, displays a wide overlap with Catholic teaching on the nature of sin. It is a fascinating and hopeful experience to be able to bring two different traditions together and find, for once, the similarities, rather than the differences.

Disclaimer: Before I begin this discussion, I want to first guard against the criticisms that may come from undertaking an interdisciplinary approach to this topic. Any analogies that are made within this article are first and foremost that: analogies. When I discuss Yato as a Christological figure, I am not forgetting that he is a Shinto god of calamity, whose existence is directly resultant from the evil wishes of humans. The analogy is not perfect. I recognize this. But in fact there is no perfect analogy between God and anything extant on earth. My concern here is to distill parallels where they can be found, not to draw the perfect metaphor for the Catholic concept of God using this anime.

I. Phantoms, Temptation, & the Loss of Humanity

The Phantoms in Noragami are manifestations of negative human emotion, creatures of the Far Shore, or the afterlife. They are supernatural, or perhaps more accurately, paranatural existences visible only to animals and the very young. This in itself is interesting, considering reports such as Heaven Is For Real (a book relating the real story of a young boy who had a near-death experience and conversed with God), but as there is no theological basis for such a discussion, I must gloss over it here.

Instead, I want to focus on the role of Phantoms as Tempters, as invisible, but very real beings that seek to draw humanity into evil. The Phantoms in Noragami function in a very similar manner to the active evil of Catholic teaching.

Evil is not a concept, a nebulous abstraction to be feared at a distance. It is an explicitly present reality, and its minions in this world are agent beings that actively seek the ruin of souls. Phantoms and devils/demons work in the same way: through the power of suggestion, of temptation. Like the Phantom at the railroad crossing in episode 3, temptation beckons, seduces. Sin is always an choice. Humans always have the option to choose either the good, or the evil. Noragami highlights this dynamic with Yukine, as well as with the high school student Manabu in episode 8.

In the confrontation with the bully, Manabu stares him down, empowered by Yato with two razor blades. Behind Manabu (and this is similar to the way that Phantoms are shown to operate elsewhere in the story) hovers a large Phantom, prompting him forward. “Kill him,” it says, “Cross over the line. Paradise is so close.” Temptation is always a hint, a suggestion, a promise that evil fulfills; but, in truth, it is no more than promptings. It is the weakness of the human heart that gives in and falls into evil, crossing the line. Manabu, fortunately, stands his ground and chooses to resist temptation.

And what is it that allows him to resist? Yato’s final words after giving him the razors…”If you want to give up your humanity, that is.”

II. Yukine and Corruption of the Soul

Yukine’s depression and subsequent fall into sin results in his merging with a Phantom. Before I go further, a word about Yukine’s responsibility. Is it possible, considering what I have said about the sin being a choice, for Yukine to be both at fault and still sympathetic? Absolutely. Yukine, whether he is technically dead or not, is human. He’s not perfect. He’s not supposed be. He never will be. But he is still making a choice, crossing the line that Manabu refused to cross.

In episode 9, the state of the human soul as it falls into sin is viscerally portrayed through the visual medium, as Yukine physically deteriorates into a Phantom. Now, I am about to contradict my earlier treatment of Yukine 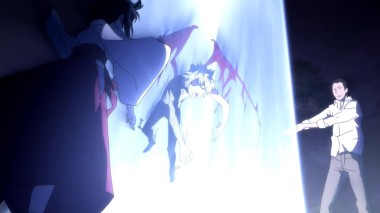 as a human, though dead, and use him as an analogy for the soul. In some ways, he functions well as both, due to his semi-invisibility to regular humans and his very human appearance and behavior. Yukine physically embodies the state of the soul as it succumbs to temptation. It is implied that the extent of the Phantom growths on Yukine’s back are due to his repeated sins, and so Yukine (as an incarnation of the soul) becomes more and more distorted.

There are two items of note here. Firstly, Yukine has not noticed the Phantoms until they were pointed out to him by Daikoku. The human soul is invisible to the human person; it is not something we have any visual context to understand or physical experience of. It is often only when others point out flaws that they become recognizable. Secondly, Yukine, as I have said, mirrors the distortion of the soul as it falls into sin. With each sin, the soul becomes darker, more inclined to evil and less that its beautiful original form.

Finally, as Guardian Enzo over at Lost in America points out, Yukine’s state of corruption falls in line with an ongoing theme in the show: actions have consequences. This is likewise in line with Catholic teaching. Every action taken either draws the soul closer to God, or further away. There is no stasis in the spiritual life.

III. Yato as a Christological Figure

If you need to, go read the disclaimer at the top of the post again. All this so far has set the stage for Yato to take on the role of a Christological figure for Yukine. 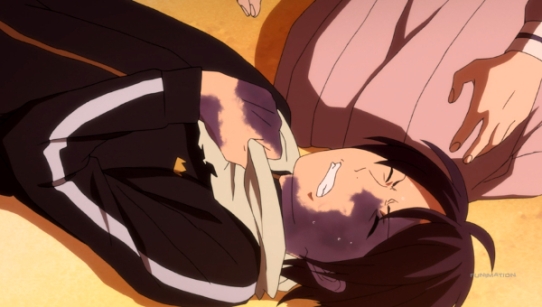 The first, and most obvious connection, is that Yato literally suffers to the point of death in order to redeem Yukine and bring him back from the edge of evil, to save his soul. Although Yato is not nailed up on a cross, he is shown numerous times to experience physical pain when Yukine sins and is eventually laid at death’s very doorstep before Yukine repents. Like Christ, Yato very literally takes on Yukine’s sins in the form of the blight. Yato also serves as a father-redeemer figure for Yukine. As Hiyori says, his words are “almost like a father’s.”

There are a few more subtle connections floating around Noragami, as well. The first is when Yato discloses to Hiyori the connection between gods and Regalias. He tells her that the gods learn from Regalias, the Reglaias, who were once human. Like Christ, Yato learns directly about the human experience from former humans themselves. He also wanders a metaphorical desert where he is unloved, suffers the cold,

the pain and the hunger of a human being. Yato even discloses to Hiyori that, “Even I’d like [a friend].” Despite being a god, Yato experiences very human pain and desires. Contrasted with Tenjin’s grand quality of life (and it is grand, for sure, but very much detached from the lives of the people he answers), it is Yato who more clearly mirrors the experience of Christ on earth.

IV. A Digression on Spiritual Warfare

Before I finish, I want to take a moment to address one final point. In Noragami, the battle between the gods and the Phantoms is shown to be constant, yet mostly invisible from the normal human inhabitants of the city. This is, in fact, quite a good metaphor for the reality of spiritual warfare as articulated in Catholic teaching. There truly is a fierce battle raging at all times, where the forces of good and evil contest for human souls. The battle may not be as physically evident as it is in Noragami, but it is there nonetheless.

NOTE: I gave Noragami a 7/10, and you can find its ranking on the Ongoing Rankings Page.

7 thoughts on “Catholicism in Anime: The Consequence of Sin in Noragami”