I am genuinely impressed with WIXOSS currently, and it has done a ton to restore my faith in Mari Okada’s skills after Nagi no Asukara went off the tracks in its second cour. For a long time, WIXOSS has essentially just been running on having a twisted plot and a foreboding atmosphere, and that’s been enough to keep me interested. Now, though, Okada is starting to weave in some truly fascinating character threads and is slowly deepening both the characters and the pit into which they are descending.

We start off the episode with Hitoe collapsing mid-battle, and Ruko and Yuzuki having a heart-to-heart for the first time since Yuzuki ditched Ruko to make her wish come true. Yuzuki doesn’t have a lot of real information to impart, but that’s par for the course with WIXOSS. We the audience are just as much in the dark as the characters are, and I’m of the opinion that this has been an excellent choice for the show. There are different ways to handle mystery-esque set ups like the convoluted and hidden battle game, and WIXOSS has chosen to take the route that follows the girls’ own journey. I suspect the revelations and catches to playing in this horrible situation aren’t even close to being over.

It’s worth noting here that Yuzuki seems to have experienced that wonderful screenwriting phenomenon we call character growth. She’s in a bad spot, serving as the LRIG to her former friend, needing to trap Hitoe inside a card if she ever wants back out herself, and I think the Yuzuki of old would have done it. It hasn’t been that long since she ditched Ruko in her obsessive quest to win her battles and have her wish granted, but she’s no longer willing to sacrifice others to achieve her own goals. I loved the way 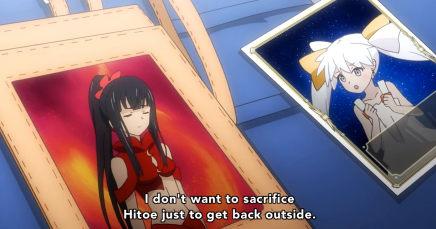 Yuzuki kept contradicting herself: “…at least, that’s what I thought.” For someone who was once straightforward, she’s now had her world altered and has to deal with it accordingly. She can no longer even use the same patterns of thought as before.

As I alluded to in my introduction, WIXOSS has kind of taken a non-traditional approach to character, favoring plot above all. One of the great tenants of screenwriting is to allow your characters to drive the plot, but WIXOSS is all about a lack of control. Rather than allowing Ruko, the de facto protagonist, to drive the narrative, the plot has advanced around her and the other characters. However, Okada has still managed to build character in this unconventional way, and I’m now somehow invested characters (like Yuzuki) who were once entirely unsympathetic to me. I might take some time later to consider what exactly has caused this shift, but right now I’m simply impressed that it has happened.

This week’s episode also brought up the theme of guilt, at least in my mind. At this point, everyone except Hitoe (and maybe Tama) has stained their hands in someway with this selfish game. Eventually, someone is going to have to shoulder the responsibility for it all: my bets are on Ruko. In a sense, she’s the most guilty because of her ability to hurt others for her own pleasure at no risk to herself. Both her and Tama are conflicted between their drive to fight and their fear of hurting others. Tama’s still kind of a mystery, but she continues to show sparks of life as more than just a cutesy mascot.

My final note is regarding the reappearance of the tower from the first episode in the PV for next week’s episode. It was something of a motif early on in the show, but has been pretty much absent. I rather liked it as a recurring image, even though it hasn’t yet been imbued with any symbolic importance beyond simply being ominous. It did have a prominent role in Ruko’s nightmare from early in the series, and even if it winds up not having any particular deep meaning, its still an effective device at creating a sense of foreboding. WIXOSS excels at atmosphere, and if it wants to simply use the tower to cause anxiety, I’m fine with that. It’s appearance in the PV, overlaid with the words, “I have a wish now,” is subtly dark, despite the light colors.

Overall, WIXOSS has become one of my favorite shows this season. I once again have to applaud Mari Okada for writing her way out of the abysmal run of episodes immediately after the premiere. For a show to have swung from a near drop to being a favorite is a huge change, and I have to give credit where credit is due. A shout out to J.C. Staff, as well, for doing really great stuff with the art style and visuals despite having less than top tier animation. I don’t even notice all the still frames and minimalistic animation anymore. Cheers to everyone involved with selector infected WIXOSS.