So, Zankyou no Terror didn’t make it into my First Impressions post due to a late start, but that’s okay because that was a premiere deserving of a full write-up. This is my first outing with Shinichiro Watanabe and I was, to be frank, hugely impressed with the episode from start to finish. I don’t have any experience with him regarding his style of direction, but if his other work is like this, I’m now much more interested.

Early Verdict: Premiere of the season, and it looks like Noitamina might be following up Ping Pong with another Anime of the Season candidate. Great aesthetics, great direction, great tension building, great everything. A must-watch in my book.

What can I even say about this shot? Just…man.

I want to start off with the opening scene of the show, an almost wordless high-speed theft involving grenades, guns, spray paint and snowmobiles. And it’s that lack of text that caught my writer’s eye. If I watched more stuff like the opening sequence of Zankyou no Terror, I would become a fabulous screenwriter just like that (I know this because I already see how studying character writing in shows like Monogatari has made me better at character writing). It takes a lot of artistry and cleverness to build an truly engaging—not just cheap thrills—but a truly immersive, instense scene like that without any dialogue. And sure, there were people talking, but that was background, atmosphere. All the action was conveyed through the visuals.

My absolute favorite moment out of the first few minutes was the silent exchange between the figure I’m almost certain was Nine and the supervisors hapless watching through the camera. Nine gestures with a gun towards the stolen object (presumably a bomb of some sort) and the shot changes to the men watching him on the screen. They exchange a helpless look, make worried noises, and then the scene moves on. We don’t see the door open. We don’t have to. Everything that needed to be conveyed was done in the space of a few seconds.

The rest of the episode was a little more standard, with a lot more dialogue filling the time, but there were still moments when the visuals took over. One of my favorite moments was the repetition of the shots when Nine and Twelve are placing the bombs, and then again when the bombs go off.

Character-wise, Nine and Twelve are a normal anime pairing—Twelve being kind of genki, happy-go-lucky; Nine being cool and brooding. To me, the more interesting character is Lisa Mashima, the unhappy, bullied school girl who gets roped into being an accomplice in the two boys’ terrorist attack. Nevermind the absurdity of someone getting coerced (sort of? I mean, she could have chose to die) into joining a terrorist duo and the due actually being totally cool with accepting her—Lisa clearly has some problems in her life, and I’m not sure an overattentive mother is the answer. Even before she utters the line, “I wish everyone would just disappear,” shots like the first one in this piece convey a look that very clearly reads as loathing. Generalized, not specific. Which is worse./? 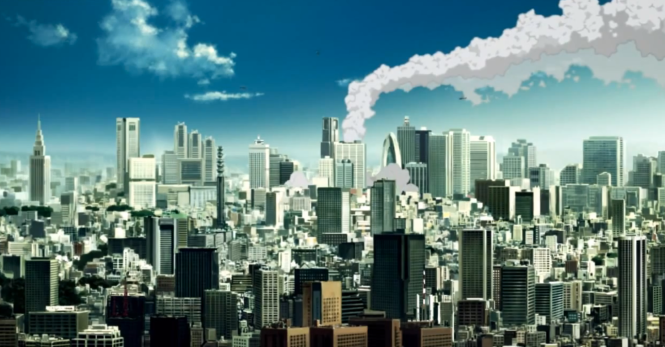 Aesthetically, Zankyou no Terror looks and sounds great. The final collapse of the building rivaled the animation of Aldnoah.Zero‘s widely acclaimed final cataclysm, and the visual vibe of the show reminds me a lot of the GoHands style. I’ve never heard of MAPPA before, but I’m impressed with their work here. And the music by Yoko Kanno was top-notch, as well. If I recall correctly, Watanabe is supposed to be known for his integration of music into his work, and I’ll be interested to see what he does with it going forward. There were a couple pieces of the soundtrack that actually caught my ear (a rarity for me) during the first and final scenes, which I would say was a good thing this time.

I don’t have too much to say about the story or the characters at this point, but from a craft perspective, Zankyou no Terror really impressed me. First episodes, for me, are always a matter of building confidence, and I feel like I’m in good hands here. The subject matter itself is still up in the air as to whether or not it will grab my heart, but at the very least I can watch and enjoy the technical excellence going into this show.

P.S. Oh my gosh, I almost forgot to say something about that dream sequence. More awesome visual storytelling. You don’t need words to convey the sense of fear that was emanating from that flashback.

I dig the cute/creepy contrasts the show was throwing around. Each of the three leads had moments when they went from looking standard anime-cute to looking supremely creepy.

4 thoughts on “Zankyou no Terror, Episode 1”