My week in anime this week was yet another confirmation in my belief that the 3-episode rule is complete bunk and that 4 episodes is a much better standard if you want to box yourself in by arbitrary numbers. Argevollen, Glasslip, and Aldnoah.Zero all engaged me at a much deeper level in their fourth episodes this week, moving each of them solidly into “keeper” territory. By the way, 4 episodes is actually not an arbitrary choice. In traditional three-act structure terms, the fourth episode is the start of the second act. I’m not saying its unreasonable to drop a show because you didn’t like the three episodes of set-up, but waiting to see how the show is executed at the beginning of the real substance seems to be a smarter thing to do, at least if you aren’t just looking for reasons to drop shows. 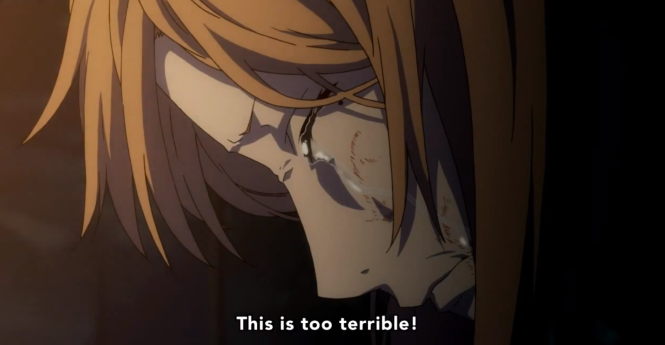 Rinka and I share the same opinion about her show.

Free! Eternal Summer, Episode 4: I wonder how long I can keep these ridiculous posts up.

Zankyou no Terror, Episode 3: A weaker episode this week, but I’m kind of hooked on blogging this show now.

RWBY Volume 2, Episode 1: RWBY is effectively the exact same show it was before, which is somewhat disappointed. I had hoped the Rooster Teeth would have learned some lessons about what makes a good show (especially on the witty banter side of things), but it doesn’t appear so. The humor is still pretty pedestrian (sometimes lame), and “clever comeback” apparently does not mean the same thing to these writers as it does to me. That being said, its nice to see them being a bit more ambitious with the plot, and the full 14 minute episode was very, very welcome. I just hope they stay that long. As for the food fight…I think I’d prefer just to see them fight with their actual weapons. I’ve been spoiled as of late with some really solid traditional action scenes, and I’m not sure RWBY‘s CGI can keep up with that. The OP song for the show is magnificent, though. 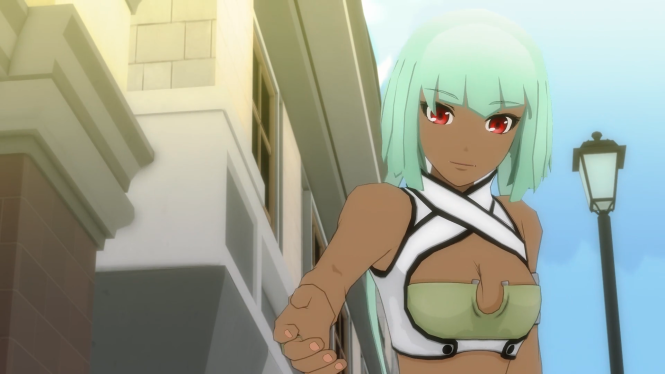 Argevollen, Episode 4: Yeah, I really do like this show. The conversation that three unnamed female soldiers have at the beginning of the episode is one of those small things that Argevollen does right that I’ve been praising each week. It’s such a great, contained moment. These girls are soldiers, but they’re also still people. They worry about things like baths and smelling bad, even after having faced down death just days before. It’s a really interesting take on the idea of soldiers, but I love the idea of not losing your humanity just because of your situation. It’s another form of the struggle Tokimune is going through. Argevollen really is taking its time with the set-up and I have to admit, I kind of love the pace of the show. It doesn’t feel rushed or urgent, and at the same time, it doesn’t feel slow. Throw in a fascinatingly understated conversation between Captain Samonji and his superiors, and you’ve got one really good episode. And that was just the first half. The second half was filled with veiled threats and some real soul searching. I’m hooked. I really like this show.

Glasslip, Episode 4: My predictions of Glasslip‘s demise were happily unfounded this week. The one thing Glasslip is doing that I haven’t really seen done before is drop us right in at the moment of change. Plenty of shows have an outsider come in and change things up, but Glasslip isn’t wasting time letting people talk, get their feelings hurt, and (hopefully soon) start to move on to other things. The pacing of the episode finally wasn’t weird this week—the dialogue felt better placed and on the whole the directing was the strongest it’s been since the first episode. And there were quite a few moments I liked: Yuki hanging around Touko even though he knows he has no chance and realized he needs to stop that, Hiro and Sachi’s reading date, Okikura showing that he’s got some self-doubts despite he arrogant demeanor. I wish we could have gotten out of the episode without Touko misunderstanding seeing Yana and Okikura together, but…well, it’s anime, I guess.

Fairy Tail, Episode 17: A slow episode this week, but the musical score was working overtime to make the whole episode feel more intense and engaging than it probably deserved. During the closing of the gate, part of my brain was going, “Man, there are a lot of panning shots going on,” but mostly I was just thinking, “YEAH! CLOSE THE FREAKING GATE!” I found it pretty hilarious that, after all that time watching the dragons “pour out of the portal,” only seven managed to get through. It seems they’ll be enough to keep everyone busy, but I was expecting at least a few more. 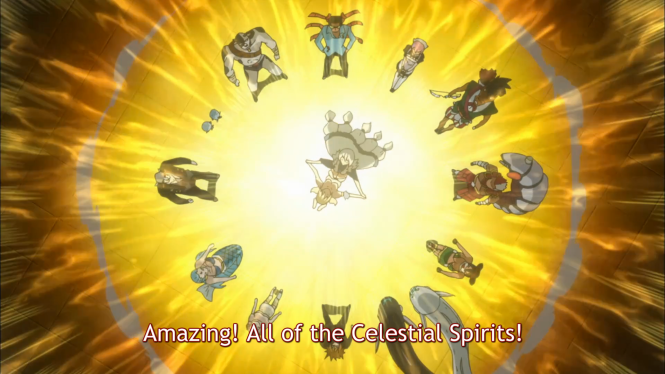 Tokyo ESP, Episode 3: This show is on super thin ice with me right now. It’s nearly lifeless, and none of the characters stay the same long enough for their changing selves to make any sense. I’m giving the show one more episode to see how they handle the rescue and moving on to the next arc, but I don’t have a lot of hope. Of the two Xebec shows on the schedule this season, Tokyo ESP is by far the inferior one. Leaning towards dropping after next week.

Aldnoah.Zero, Episode 4: Another episode gone, another twenty four minutes to take screencaps, another sequence of great action that was far too engaging to worry about things like pausing the episode. Aldnoah.Zero this week basically turned into exactly what I was hoping it would—a well-written, well-directed, well-animated action fest. Inaho continues to improve as a character, Rayet is turning out to be pretty interesting, Seyleum still has to figure out that her countrymen don’t want peace, Slain is looking like he’s going to make a break for it or start investigating on the Martian side of things. Said another way, thanks to the awesome OP song, the well-placed humor, and generally high quality execution, I no longer bear Aldnoah.Zero the ill will that I once did. There’s a lot going on, and it’s very, very competently handled and fun to watch. We still need to see how non-Urobuchi handles the scripts in the next couple episodes, but I’m expecting Aldnoah.Zero to continue to be good going forward. (Btw, Inko, Inaho, and Calm make a great trio.)

Haikyuu!!, Episode 17: Wow. Just wow. Haikyuu!! has had some really solid episodes (like, almost all of them), but this was probably the best start to finish episode I’ve seen from the show since the very first one. The sasuga was strong this week, and there was more than one moment where it happened and I just sat there blinking at the screen going, “Whoa.” As for the episode as a whole, the directing this week was superb—every single point until the (short) montage of score and after felt like an absolute battle, which meant that each time Karasuno managed to score the emotional payoff was huge. And nowhere was this more true than at the climactic final spike by Asahi, where the moment just built from Hinata’s shout, to Aone’s response, to the fake out, Asahi’s appearance in the air behind and, finally, the monster spike to score just one more point. It was amazing, engaging, and truly impressive.

Rail Wars!, Episode 4: Ugh, the fanservice was pretty nasty this week. Like, really nasty. And not nasty like “sick nasty bro,” but just plain old distasteful nasty. I mean, just…yeah. It’s invasive and disappointing and uncomfortable to watch. That’s all I’ll say.

The ending of the episode was actually pretty funny, as the bad guy gets turned into an actor and looks like he’s about to cry: “Damn it! Everyone’s making fun of me!” I do have to give props to Takayama for figuring it out, and the shot where he jumped in between Noa and the attacker was pretty cool looking. Then he got stabbed, Sakurai took the bad guy out, and Iida says after it’s all done, “Phew, good thing the crowds didn’t panic!” Wait, what? One of your team members was a stamp book away from sustaining serious, potentially life-threatening injury and you’re glad the crowds didn’t panic? People in this show have some strange priorities.

Gekkan Shojou Nozaki-kun, Episode 4: As usually, Nozaki-kun was good for one killer joke, and then a whole lot of fun. Th one that got me this episode was Nozaki and Mikorin totally broing out over Tomoda—that’s the sort of guy humor you don’t really see very often, because it actually sort of pokes fun at the audience. The whole VN skit was the funnier half of the episode, as I felt like prepping Mikorin for the mixer went on a little longer than it needed to go. The mixer skit also felt a bit more disjointed. I definitely missed Sakura a little this episode, because she had far less screen time and far fewer lines than she’s had before. The show is stronger when she’s around.

Hunter x Hunter, Episode 140: Someone chewed me out on my ask.fm the other day for not blogging Hunter x Hunter, so I’ll throw them a bone this week because I had one thing I wanted to bring up out of an episode FULL of stuff to talk about. The really interesting thing about Leorio’s conversation with Killua’s butler and Moral’s subsequent appropriation of the conversation is that Leorio has been away and Moral’s been through the most harrowing, life-threatening situation of Killua’s life along with our favorite white-haired assassin. Leorio is wayyy out of touch. Killua is not the same person Leorio once knew (and neither is Gon—and probably not Kurapika either). I wonder if this a side of the show we’ll get to see, because Leorio’s despite loyalty to Killua and Gon, he’s been out of their lives for a while and Moral, Knov, and even Bisky have spent a lot more time with those two while he’s been away. Leorio doesn’t have that same connection. Facing down certain death together is an experience Leorio doesn’t have with Killua, and that’s not something he can easily replicate. 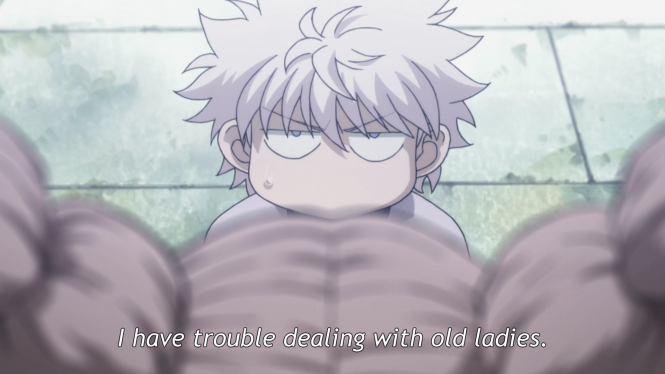 Shotas are weak against older women. It’s a fact.