What did I say last week? “Give me more of the teens,” I said. “They make the show better,” I said. Well, you know what? Zankyou no Terror did exactly what I wanted it to, and turned in the best episode since the premiere because of it. The final minutes of this episode (omigosh that freaking soundtrack) were an amazing ride—yup, I just did that. This is the kind of stuff I wanted from this show from the start, and when I got it…well, you could say I was a bit misty-eyed. 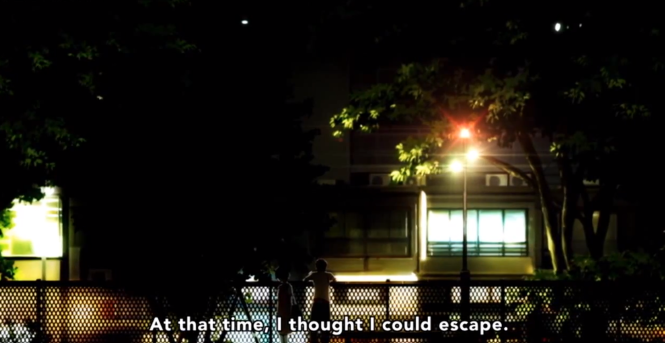 That’s going to look amazing on the BD’s.

One thing that I’ve noticed from the OP onwards in Zankyou no Terror is that it does a magnificent job of linking the words of dialogue to the visuals on screen. It’s really good directing and it really adds to the overall solidity of execution and the holistic experience of the show. Shots aren’t wasted in Zankyou no Terror; they’re maximized to either convey meaning on their own or enhance the meaning of the words that accompany them. It’s the classic line from high school literature classes: “Form follows content.” But in Zankyou no Terror it’s not pushed in your face, because the shots are short and, often, the dialogue is cloaked in the guise of being background noise. I don’t know much about directing of film, but I know when I see unity of purpose, and Zankyou no Terror has a lot of it. Everything works together to tell this story.

In the first shot, a girl whines in the background about a boy refusing to text her back, splayed directly over a shot of Lisa doing the exact same thing to her mother. The tension, of course, is that while the boy not texting the girl back is a minor annoyance, for Lisa that’s just the way things are. In the second shot, we get a gorgeous image of the scenery from Nine and Twelve’s hometown—a visual we experience along with Shibasaki, as both he and the audience wonder how two terrorists could have grown up out of such a beautiful place. In the third, Nine and Twelve play chess and Nine chastises his partner for not sacrificing his queen. And while the visual matches, they’re aren’t really talking about chess, but about Lisa—can Twelve give up on her to win the game?

I take this sequence between Twelve and Lisa as the final pillar to support my theory that Twelve is nowhere near as invested in the actual terrorist (and whatever is behind it) plot as Nine is. Twelve’s there to support Nine, but he’s willing to defy Nine’s wishes to reach out to Lisa, even to the point of bringing her back to their apartment. I suspect Twelve is much more broken than his cheery-dangerous persona lets on, and in a much different way that Nine. While Nine, it seems from Shibasaki’s investigation, has always been quiet, Twelve’s very obviously made of different stuff—the stuff that wants connection, that just wants a happy life.

And so, Lisa’s heartbreaking lament, “As if anyone would take me away when I wanted them to—I’m so stupid,” connects with Twelve in a big way. I suspect she’s echoing Twelve’s own feelings back in the days of his captivity as a child, and I also am betting that it was Nine who took Twelve away. Thus, his loyalty, without the bitterness that Nine carries towards the world.

Yeah, this is a long way from where we were just two episodes ago with Twelve bullying Lisa over the Mentos Green Tea Cola and threatening her with death in the street, but Twelve may very well turn out to be a paper dragon. Will this turn him and Nine against each other, or will Nine give in to Twelve’s need for connection and his need to reach out? What Nine does (and how he does it) will say a lot about him and what his priorities are.

But I’m skipping ahead here. Before the confrontation in the doorway, we had the magnificent ending to the episode (omigosh the soundtrack was incredible). Twelve makes his choice and rescues Lisa from two policemen—that’s no coincidence. And then we see Shibasaki solve the riddle, the answer being his own name and a clear challenge to him. His accomplishment is totally undermined, however, by the rest of the police department cheating and we see Shibasaki lose his cool once more as he panics when the timer doesn’t stop. The result: all the police’s incompetence in the terrorism case is throw up on the internet for the city to see, leading to a truly great few moments of police department’s tech guy sweeping security footage off his desk in humiliation, anger, and fear.

I would have been satisfied had the episode chilled out after that, but Zankyou no Terror pressed the advantage and followed up a spectacular execution of the tension leading up to the
“bomb’s” detonation (we knew, and Nine knew, they were in the wrong place) with the ironically heartwarming and triumphant montage of Twelve and Lisa riding through the city, cutting directly in front of a police car as they speed along oblivious in that one moment of the chaos in which they are both involved.

How wonderfully juxtaposed this sequence was—from the teen freedom music to the intense irony that it is while clinging to the back of a terrorist that Lisa is finally able to find human warmth and laugh and feel free, it was a true testament to hope awakening even in the bleakest and strangest of places. Yes, I teared up. It was so very, very good. And so very, very kind to Lisa. I don’t expect it will be smooth sailing for her from here on out, but to even just once allow her to become human and not just shut out and numb…it was beautiful.

And so, that’s where Zankyou no Terror leaves us after four episodes. I can’t say for certain whether we’ve transitioned from the set-up phase of the show into the real substance of the show, but I don’t necessarily think that’s a meaningful distinction for this show anyways. We probably won’t ever know everything about these characters and that’s going to be okay—we don’t need to know.

I certainly hope Zankyou no Terror can continue to be so fundamentally strong as a craft piece and continue to reach for those moments of humanity, and tell us a good story at the same time. The pieces are there (even Shibasaki and the police grew on me this week), and despite the 11 episode run looming over the show’s head, I’m confident Watanabe and MAPPA can pull it off.

3 thoughts on “Zankyou no Terror, Episode 4”