I’m still less than halfway through all the premieres I wanted to check out and this post is already long, so I figured I would split up my first impressions this season. I dropped 3 of the 10 shows in this initial slew of episodes, which is a fairly high atrophy rate for me. 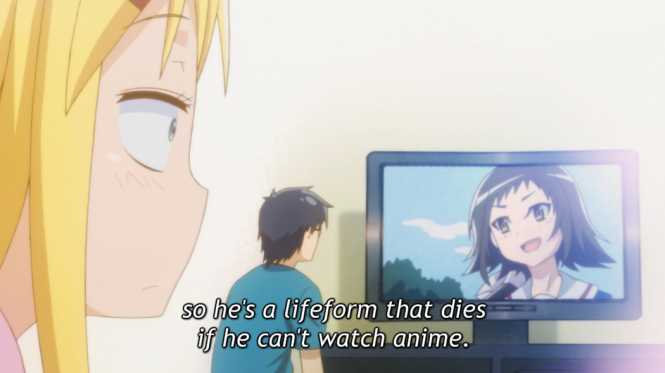 selector spread WIXOSS: Other than Chaika, I don’t think there was another show I was more excited for than the second cour of WIXOSS. I thought the first season ended on a streak of really good episodes, and it looks like the new season is picking right up where the old one left. The thing I really like about WIXOSS is how responsible everyone is, in some sense, for their part in the whole mess. Sure, they got dragged into this willingly or unwillingly, but they still maintain a degree of agency. And WIXOSS doesn’t revel in the suffering of these girls; it just shows things how they are. Keeping. (Episode 1 Notes)

Log Horizon 2: Basically more of the same, just like WIXOSS, except for Log Horizon more of the same means more talking and more talking and more obscurity from Shiroe and much crappier visuals courtesy of DEEN (why did this happen?). It’s also still got that addictive “maybe next time something big will happen!” thing going for it. And, of course, “Database” is back—did I sing along to it at the start of the first episode? You bet I did. So, I’ll keep on with Log Horizon, hoping they’ll talk less and continue to be disappointed. And seriously, DEEN? Get your act together. Keeping.

Color Me Intrigued: The Fruit of Grisaia

That was…an oddly fascinating first episode. Let’s the get obvious things out of the way: all the characters look like they belong in Monogatari because it’s the same character designer. Senjougahara clone. There are a lot of panty shots; they aren’t necessary. MC-kun is not impressed by the panty shots. Music is good. Very much adapted from a visual novel.

Okay, that’s the easy stuff. On to the rest. First off, the show looks really great. The whole color palate reminds me off White Album 2 (another VN adaptation, hmm) and I really like it. But more than that, something feels…off…about the show. Like it’s hiding its true nature—which is probably true. The direction and camera work outside of the seemingly token panty shots is really intriguing. I’d say it also seems inspired by the VN format, but it’s definitely more intentional than just mimicking the source medium. I think the direction had a lot to do with how unsettling the whole vibe of the show is, and the aesthetic plays into that as well. All in all, there was a lot of tension simmering under the surface, more than would seem to be warranted by a normal VN harem adaptation. I’m kind of fascinated by the whole thing, I sort of think I might end up hating its messaging, and I’m fairly certain I’ll be watching to the very end. UPDATE: Everything that interested me about the premiere was gone in episode 2, so dropped.

YES. I liked this a lot. Andou is such a breath of fresh air—almost a manic pixie dream girl, except he’s a guy and a bit of an airhead. Characters with outrageous flair for the dramatic nearly always work for me and Andou’s got a lot of it. The rest of the main cast looks to be fairly archetypal, but already they’ve got some traits that put them outside the norms of their tropes. For example, the redtsun (who’s cute as heck) was the one who got to do the brainwork in the confrontation with the student council president. The music was awesome, the visuals solid (Dogakobo-esque schoolgirl antic animation next episode?????), and the voice acting was good. Looks like a keeper to me.

In my screenwriting classes, we talk about how important the first ten minutes of the screenplay are—within those ten minutes you have to tell your audience who the show is about and what the dramatic premise/need is (among other things). Sora no Method has let us know who the show is about: Nonoka, who looks like a cross between WIXOSS‘ Ruko and Toradora‘s Minori. But as to what the show is going to be about? I haven’t really got the foggiest. We kind of have a general idea of the players from the OP and the sort of story that’s going to be told, but was to the direction the show is going? I dunno. The first episode was genuine enough to keep me interested, and Noel’s loyal, forgiving nature has already endeared her to me. That’s enough, for now, to keep me watching.

Bubble Comedies: Denki-gai no Honya-san, I Can’t Understand What My Husband is Saying

Denki-gai: While I wasn’t really impressed and the first half of the episode was quite dull (the ero book lover joke wasn’t funny the first time), I saw a few sparks of personality from some of the characters and moments of the show in the second half. The main problem I’m struggling with is that Honya-san doesn’t seem to offer anything new or anything I haven’t already seen done better elsewhere. If I want to watch a comedy about a mangaka, I’m going to watch Nozaki-kun. If I want to watch a good workplace comedy, I can watch Working!! So, let’s sum it up just by saying that Honya-san has two potential paths to becoming a keeper this season: 1) be funnier and more creative. 2) Get me more attached to the characters. I like the art style of the show, but right the overall package lacks the charm I’d expect this kind of show to offer. I’ll give it a few more episodes before I make a decision. UPDATE: Dropped after episode 2.

I Can’t Understand What My Husband Is Saying: You know, I think I would find this funny if the show had anytime at all to breathe, but there were just too many jokes crammed into one episode for any to really hit home. Or maybe they just weren’t funny anyways. Hard to tell. At three minutes a pop it’s not a huge investment, so I’ll stick it out until I decide I want my three minutes back.

Cross Ange: Yeah, no thanks. The opening battle was boring. The “sport” was boring. The princess isn’t the least bit interesting. Pacing was bad. Some of the animation looked pretty decent, but of course then we had the ending scene. Screw that. I’m not jumping on board with 25 episodes of sexual abuse and violence. Dropped.

World Trigger: Booooooorring. I’ll admit, when Yuma sprang into action, it looked pretty cool That’s not going to save the tepid in-scene pacing and general lack of energy in the show. It was basically one big yawn and I was pretty happy when it was finally over. Dropped.

Ushinawareta Mirai: I liked Kenny and the kicking girl, but overall this episode was lifeless, looked bad…and was lifeless. I mean, we did get an episode one love confession, but HA! We know that’s a death flag for sure. Ultimately, it just comes down to the fact that I didn’t enjoy the episode, nor do I really see that much potential to enjoy it later on. There are elements that I think I’d enjoy in another show, but here it’s just not worth my time, especially as a Saturday show. Dropped.