This is the second installation of my first impressions for the fall 2014 anime season. You can read the first iteration here. When it’s up, part three can be found here.

Alright, I’m ready to tackle the rest of this season’s premieres. Or, I thought I was and then I realized that I have a lot more shows left to watch than I realized. So there will be a part three coming sometime in the near future!

No obvious drops in this batch of seven shows, which is kind of a bad thing seeing as I still have six more premieres to watch. That’ll put me at 23 shows total for the season, which is a full ten titles above where I want to be. I might have to do some sifting through and figure out which titles overlap in certain categories of shows. But anyways, here we go!

Ahhhhhhhhh Chaikaaaaaaaaa. It is so good to have this show back in my schedule. There’s really nothing I don’t like about it, and tons of stuff I just adore. And the first episode was all that: funny, slick, and charming. I also hear that the source light novels are supposed to end concurrently with the anime (or not—I’ve heard both), which means we might be getting a real, canon ending to this show (which reminds me that this is not the first time BONES has done with—Blast of Tempest being the obvious example on my mind). I’m a little worried about that and the 10-episode length, but Chaika hasn’t steered me wrong yet! (Episode 1 Notes)

Listen, I had no illusions going into Trinity Seven that it was going to be anything other than transparent harem nonsense. While I don’t particularly care for the fact that the show seems to want to flaunt that it knows it too, it does set the show in a comfortable niche where I don’t have to think very hard about it. I already know the problems it’s going to have, and (more importantly) I know what parts about it I’m going to like. I’m going to like the fact that all the girls in the harem have distinctive personalities. I’m going to like the grimoire-MC relationship and the fact that the MC has a personality of his own. This is turn-your-brain-off, enjoy-the-nonsense level stuff, which is exactly what I expected and wanted from T7. I know it’s not going to be a great show. It might not even be a good show. I don’t really care. It should occupy a dumb-fun sort of slot in my schedule for this season and that’s all I need it to do. Probably keeping, but could drop if boring.

Bahamut: I was a little tired by the time I got to Bahamut, because it didn’t leave quite the impression on me that Garo did. It’s certainly got a sense of fun and Favaro looks to be an interesting lead, but something about it just didn’t hit home for me. I wonder if there was just too much waltzing around and too much spectacle for me—but I like those things, so I can’t exactly put my finger on what wasn’t working for me. It could just be that I didn’t have a sense of the stakes in any of the fights. Favaro never really felt like he was in danger to me, even when facing off against the bigger demon creature. But, the demon-girl has got some awesome moves, which is enough to bring me back next week.

Garo: Well, I don’t exactly know what I was expecting from this show, but whatever it was it wasn’t this. Garo more or less had the most provocative premiere I’ve seen this season (Cross Ange doesn’t count, that was just offensive), with witch hunts, prostitutes, and demons packed into an engaging twenty-minute episode. Make no mistake, this isn’t your typical light novel action adaptation—this is a competent, (though I hesitate to say it) mature (maybe?) show. And despite the character designs almost having a Prince of Egypt look to me, Garo looks the part. The CGI armor is a little unfortunate, but I suspect I’ll get used to it eventually. In any case, I’m intrigued, the OP animation is incredible, and there weren’t any serious red flags in terms of animation or writing quality, so I’m in for now.

Could we be so fortunate as to get TWO traveling princess & company anime in a single season? So it seems! Akatsuki no Yona looks to be a blend of The Twelve Kingdoms, Scrapped Princess, and The World is Still Beautiful, which is a combination of three shows that I like. We obviously need some explanation about the events of this episode, but all indications seem to be that this is going to be an adventure story of an exiled princess and her faithful harem of followers, including the probable love interest, Hak (or should I call him Hax after the number he did on those guards?). The shoujo humor bits worked a lot better for me here than they did in The World is Still Beautiful. Maybe I’m just more used to them now, or the timing was better. I’m not sure. There’s really not a lot else to say about Yona at this point; it was a solid introduction to what looks to be a solid show. Keeping, looking forward to it.

Surprises of the Season: Kokkuri-san, Shirobako

Kokkuri-san: Thanks to everyone who recommended this show to me. Easily the best comedy premiere I watched. Back in high school, as we prepared to put on Beauty and the Beast as our school music my senior year, our director told us: “Comedy is tragedy plus time.” I don’t think I’ve seen an anime yet that understands this principle as well as Kokkuri-san. There is most definitely a sad undercurrent that runs through every scene of this show—but never in the service of abusing Kohina, only of sympathizing with her. Although the comedic timing wasn’t as sharp as I’d hoped (and I could definitely do without the pedophile jokes), the montage of Kohina’s development after Kokkuri leaves was spectacularly and heartbreaking effective. It’s nice to have this show around, as I’ll feel much better about dropping the lesser comedies of the season should it come to that. Still a bit unsure, but probably a keeper.

Shirobako: While I was expecting Shirobako to be interesting, I didn’t expect it to turn in one of the technically best premiere episodes of the season. Maybe the creators were just channeling their own experiences, but the tension and release between small conflicts and resolutions was superbly paced. This was a confident, well-executed first episode that genuinely hooked me both into its general premise and its characters. The drag race between Miyamura and the G.I. Staff employee was a great eye-catch for the entire show—a little silly, but plenty entertaining. It’s also pretty nice that we’ve got a full cast of working adults and a lot of recognizable workplace issues already. There are a lot of names to learn, but I am totally committed to the show after this episode. 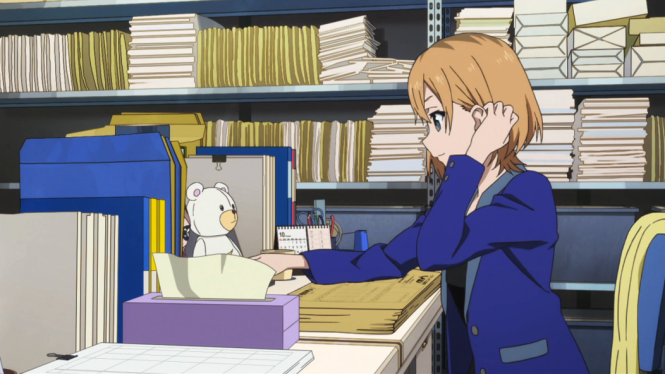