We traded out sakuga for great character work and one heckuva a fascinating conflict this week, and I’m totally okay with that. 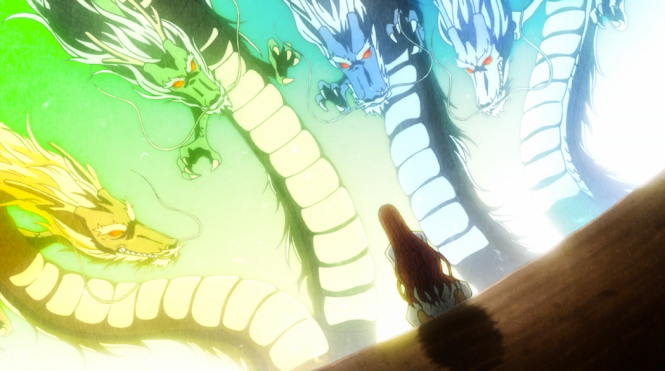 Yona’s growing, but it’s happening slowly and imperfectly. While she may finally be understanding just how ignorant she truly is, that’s not enough to transform her into an avenging angel for her country. Awareness of ignorance is not the same as knowledge, but Yona’s taken the first step towards understanding the world around her.

On that note, it’s incredibly appropriate that Akatsuki no Yona decided to funnel in the Kouka Kingdom’s creation myth into this episode. Creation myths, at their core, are stories that inform their respective culture about how the world works, so narrating the myth in this episode fits right in with the theme of Yona realizing that she has no clue how her kingdom works, not even in the very place in which she grew up.

For me, the more interesting piece of all the religious talk that happens in this episode is the little circle around which the priest leads Yona. She begins their conversation on the cliff by saying that she doesn’t need the gods, but by the end of the episode she’s come full circle—effectively accepting a divine warrant for her future actions and her quest to find the dragon warriors.

This stands in direct contrast to Soo-won’s speech last episode, in which he claimed he didn’t need the power of the gods, only the power of the people. The main conflict of the story has now revealed itself to be far wider in scope than a simple family squabble for the throne. This is now a battle between the gods and the fundamental structures of the country’s mythos versus a man and his desire to harness the power of humanity. Of course, it’s not quite as simple as religion versus non-religion—after all, the gods support the people. But in this creation myth, we’re perhaps given a hint of foreshadowing as to how this story will end.

When the corrupt people seek power, the gods will set things to rights through chosen human actors. That’s the core of the Kouka Kingdom creation myth, and it’s clear that Yona has been set on a similar path. Yet, at the end of the myth, Hiryuu passes away, exhausted from the fighting. Is this to be Yona’s fate, as well?

And Yona is led back to her own words by the priest, but for a greater purpose than before.

Apart from all this talk of gods and men and divinely ordained quests, we also got some great character stuff this episode. One of the fears I’ve had for Akatsuki no Yona is that Yona wouldn’t actually end up a strong character in her own right, but just a fierce personality for whom a harem of handsome fighting men do all the work. But I don’t think that’s where the show is leading us. It’s clear from this episode: Yona wants to protect Hak just as much as he wants to protect her. And (because Yona has that classic harem lead density) we know that this isn’t her babbling about some boy who’s stolen her heart—it’s about keeping a dear friend alive.

Yona also is starting to push against the chains of her feelings for Soo-won. Despite the fact that he loved her hair, she’s fine with it being cut. And, although she can’t quite do it yet, she thinks about throwing away the hairpin. I’m not sure I want her throw away the hairpin, because I think it could turn into a compelling symbol of her desire to truly understand other, but the part of me that wants Hak to win the princess sweepstakes wants her to get rid of it. Hak himself is aware of what the hairpin represents, and it seems he understands completely his own feelings for Yona are romantic.

The two of them still have great chemistry and are fun to watch on screen together. I’m actually grateful this is a harem and we aren’t getting SoreSeka levels of kissing happening, because I think the romantic stagnation leaves a lot more room for Yona to grow into her own, unhampered by the potential stereotypical pitfalls of a romance. Right now, I’m really happy with where her character is at. Her blood’s boiling; she’s going to take action.

6 thoughts on “Akatsuki no Yona, Episode 7”