Emi may have been playing a piece titled “Winter Wind,” but there was an incredible warmth to her performance. Even the chill of loneliness, it seems, can’t overcast the heat of her passion.

Emi and Takeshi may be coming after Kousei for different reasons, but they’re both locked into a phenomenon that should be recognizable to anyone who’s seen Chihayafuru—making another person into an ideal. For Takeshi, Kousei represents absolute skill incarnated in victory after victory in competitions. For Emi, he’s inspiration and, perhaps, music contained within a single small boy.

The difference between them, I think, is readily apparent in the ways they interact with Kousei and the piano. Takeshi, in his pursuit of excellence, appears on the verge of collapse before his performance, but strides out confidently to play—”unswerving fortitude,” as one of the judges calls it. But for Takeshi, much, much more than for Emi, I’m afraid. What he’s chasing, in another person, dwells outside himself. While it’s true, as his teacher recognizes, that the external force of Kousei working on Takeshi for motivation has driven him to grow up quicker than he would have otherwise, where does Takeshi have left to go after he catches up to Kousei? And what if he never can catch up? Or what if he finds that what he’s been chasing all this time is an illusion? When Kousei plays in this competition, I suspect we’ll find out just how deeply imbedded in his core Takeshi’s drive is. 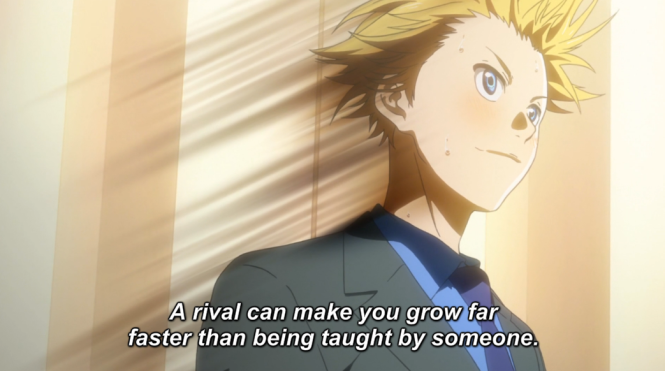 Even Takeshi’s comedically framed reaction to Kousei’s praise lines up here. He still sees Kousei as someone far beyond his reach, as someone worthy of admiration and of respect. Someone whose praises mean something.

The episode kind of pivots on Takeshi and Emi’s teachers, Takayanagi and Ochiai. There conversation is steeped in professional tension and barely shaded competitive animosity, but I thought it was pretty interesting to see where how their respective personalities manifested in their students. Takayanagi (who the judges call “shallow“) ribs Ochiai over Emi’s recent struggles in competition and gloats over Takeshi’s successes, betraying an external focus that, as I’ve said, shows up in the way Takeshi thinks about Kousei and about piano. Ochiai, on the other hand, relates a few details of Emi’s internal tides (and seems to understand Takeshi better than his own teacher). Emi, who I’ll get to soon, is an internally motivated person and, as I know from experience, internal motivation can be fickle. But at least it’s always dependent on you (or your breakfast).

It was especially interesting, I thought, to see the different locations in which KimiUso set Takeshi and Emi’s conversations with their teachers before the competition. Takeshi and Takayanagi speak in the practice room, with Takayanagi standing over Takeshi; Emi and Ochiai sit even with each other across a table, having tea. And while Takayanagi argues with Takeshi about the competition, Ochiai simply listens and responds to her student’s thoughts.

And she has to because, unlike what Kousei became and what Takeshi sometimes seems like, Emi isn’t a machine. She’s a person, with powerful, sweeping, and sometimes painful feelings—and how you express those feelings is what represents you as a person.

The way Emi expressed her feelings won me over. Move over for now, Tsubaki, new best girl is in the house, and she demands attention.

It’s kind of hard for me to write about Emi because I felt like her music expressed everything she had to say more beautifully than I ever could. She’s very much like Kaori—her music speaks for her.

Unlike Takeshi, Emi isn’t chasing Kousei’s success—which, ironically, Kousei achieved when Emi most detested his playing—but an earlier image of him. Takeshi’s ideal might be more dangerous, but Emi’s is certainly harder to catch, because she’s seeking a feeling. In one sense, this protects Emi, because she’s absolutely sure of what she wants, perhaps even more certain that her spikey-haired counterpart. In another, she insulates herself from the weather of losses and successes in the competitive world because, for her, achievement is returning to the place where she was moved. And so, in her search, she casts about with the very emotions she seeks to settle, letting her feelings rage as they will. Of course she would reject Kousei’s robotic playing (“All you do is play boring music!” she raged last week)! It stands against everything that touched her when she was young, and everything that keeps her moving forwards.

Easily my favorite shot of the entire episode. Oichiai weeping over her student finding passion at last is a beautiful testament to the kind of person this instructor is.

I don’t know if Emi’s performance will allow her to move on in the competition, but the fact is that she has made herself heard. Now, how will Kousei respond to the call she’s made?

7 thoughts on “Your Lie in April, Episode 8”