This piece was originally published in the tri-weekly Crunchyroll Newsletter. You can read the article, and others on the Newsletter page.

I initially picked up Yuki Yuna wa Yusha de Aru (officially abbreviated as YuYuYu) as my requisite “Cute Girls Doing Cute Things” anime of the season and, well, it has occasionally filled that spot and occasionally…not. That is, unless you consider slashing through world destroying monsters with giant swords or punching through rock hard monster souls or flying through space on gun chairs to be cute—if so, then YuYuYu’s cute all the time. 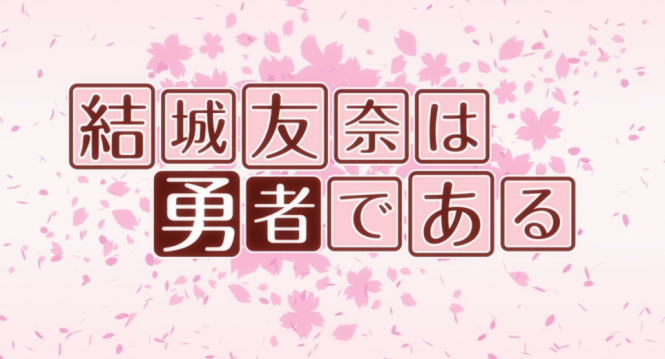 Even seven episodes in, it’s hard to really say that I’ve got a firm grip on what YuYuYu is actually about. Is it some kind of Madoka clone? Is it something else entirely? I’m not sure, and that’s not necessarily a bad thing. As a whole, the show’s been an entertaining, if occasionally bemusing, watch. The plot oscillates between the Hero Club doing good deeds at school or out in the community and battling the Vertexs that threaten their world, and, overall, it manages to reconcile the two parts well.

The setting within which the story takes place likewise balances between being a normal middle school world and the beautifully colored battleground where Yuna, Fu, Karin, Itsuki, and Togo fight. Perhaps it’s because of this balance that everything in the show feels indefinite, other than the characters themselves. There’s something to be said for the steadfast manner in which each of the girls maintains her distinct personality, no matter which world they’re in. But, all around them, things are shifting and tentative—and thus, the Heroes become the one consistent element of the show. 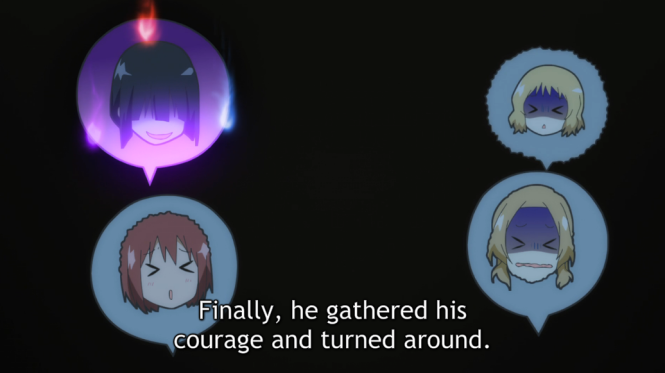 That’s something of a mixed blessing, because the Heroes themselves are a mixed bag. The titular Yuna is easily my favorite character—she’s optimistic, cheerful, and kind without being drifting into the genki archetype. Some might find her relentless positivity off-putting, but for someone like me who has always wanted to be better at seeing the good in a situation, Yuna’s great to watch. Fu and Karin are notably more complex than Yuna, and are my next two favorite characters, respectively. Fu’s conflicting impulses to protect the world and protect her club members give her a nice depth and Karin’s status as a solider trained to fight and nothing else puts her at odds with the rest of the group. Itsuki and Togo, while cute, haven’t yet presented me with anything to really stand out (is it a coincidence they’re also the two ranged fighters?).

There are also a range of curious facets of the show that present themselves here and there—the fairies that provide the Heroes with their powers, the odd blending of magic and technology in the girls’ smartphones, the interaction between the Shinju-sama religion and the realities of the fight, and the Hero Club’s awesome “Five Tenets” (I truly think following those rules would improve most people’s lives).

As I’ve said before, things seem simultaneously balanced and awfully messed up. That YuYuYuhas been able to walk that line effectively for so long is impressive, but I’m starting to wonder if there’s a plan here or if it’s all just coincidence. I get the feeling that the ending is going to make or break this show: if it’s good, the whole show might look brilliant in retrospect; if it’s not, I might end up genuinely angry. But the curiosity is still there, and that’s been more than enough to keep me coming back each week.

It also helps that the show’s production values are strong. Visually, YuYuYu looks really great—between the battles and the lovely backgrounds and the cute character designs, it’s both pleasant to look at and effective at evoking the right atmosphere depending on which world the characters are in.The soundtrack by Monaca is serviceable in most places, but the choral pieces in the battleground really stand out.

I’d be remiss to end this piece without mentioning a surprising strength for YuYuYu, which is its humor. A lot of “Cute Girls…” shows bank on the fact that the audience likes the cuteness of the characters enough to go along with the rather dull humor, but YuYuYu has a sharp sense of comedic timing, mixing in visual gags and facial expressions and pulling off some legitimately funny jokes. The comedic pacing is quite quick, jumping straight from the punchline of one joke into the set up for the next. It’s not a comedy show by any means, but the fact that YuYuYu apparently understands how comedy works better than most 4-koma adaptations definitely is a nice reserve of entertainment for the show.

Overall, I’m still feeling somewhat left out in the cold by YuYuYu‘s refusal to tip its hand as to where its ultimately headed, but my curiosity and the overall quality of the production are enough to keep me interested. It’s certainly not in the top tier of offerings for this stacked season of anime, but it could end up being a wild ride before all’s said and done.

You can catch Yuki Yuna wa Yusha de Aru simulcasting on Thursdays at 1:19 PM on Crunchyroll!