I am so fortunate to be watching and writing about this show.  It is truly one of the highlights of the season for me at this point: deftly written, funny in its funny moments, and incredibly effective in its serious ones. I was thinking earlier this week that Akatsuki no Yona was probably my pet show for the season, but no. That’s not right. It’s just one of the best shows I’m watching.

It’s starting to look more and more like the story Soo-won fed to Yona about King Il killing his father was a total fabrication. With his own advisor, Soo-won praises the king’s kindness, but laments that it opened the door for corruption to spread. And the other things he says in this brief scene indicate that his real goal is to restore the Kouka to its former glory/prosperity—in other words, he killed King Il for the purpose of taking the throne and healing the country. Not out of revenge. Not out of personal ambition. But out of love for his country. Yet, he continues to reject the gods’ assistance in achieving this goal.

As a commentor informed me, that was an error in the subtitles—it was Soo-won’s father who banned the dragon books, which makes total sense. And here, again, we return to the opposition between the power of human will and the power of the gods. As Yona prepares to take the true first step in her divine quest (meeting the first dragon warrior), Soo-won sets aside the book he had enjoyed as a child. The irony here is that it seems more and more like Soo-won’s goal and Yona’s goal are actually going to be the same thing: restoration of the kingdom. But, already, Soo-won is being set up to fail because of his reliance on his own power. And we’ll see this structure of similar goals undercut by different motivations crop up again later in this episode. 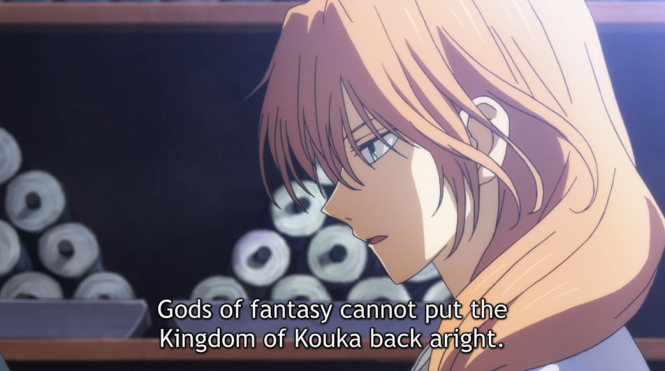 But, anyways, all the Yona moments this episode (and Hak moments, too, but mostly he was just trollin’)! The first couple serious lines she has this episode are 1) thinking of Hak’s injuries and 2) going back to her refrain of wanting to see and understand the world. The nice thing here is that Hak doesn’t act like a typical possessive bishounen by raising a fuss about her safety—he understands that Yona’s trying to grow and tries to give her the space to do so, even if he can’t resist lecturing her over it.

I really like that a moment of Yona’s understanding comes about the food she ate in the palace. Food is such an essential part of life, but (especially for a privileged princess like Yona) it’s so easily taken for granted by those who don’t have to work for it or prepare it. So for Yona to see the place where the food that sustained her very life originated, she’s brought back to a very basic, very primal place to begin understanding her world. It’s square one; nowhere could be a better for helping her to grow in appreciation for the life she now has and had in the past. And while the first vision she sees of it is children playing happily, on the way out of town she hears what life is truly like for the common people. Heck, it even comes from the Fire Tribe soldiers who’ve just returned from the capital reflecting on the huge variety of food they’d never seen before.

I really love that the show gives Yona time to muse over things and think about them without drip feeding us every bit of her internal thoughts. After they leave the village, we just get shots of her being quiet, reflecting. Clearly, the moment of danger brought on by the encounter with the Fire Tribe soldiers reminded her of her previous desire to be trained to fight—and so we dive into the second big theme of the episode: reflections on weapons and violence.

Hak’s dilemma here is actually even more complex than Yona’s because there are quite a number of factors at play for him. One of his first lines, “Now I disobey the orders of my king,” is incredibly reflective of the type of person he is and what he values. We know Hak was loyal enough to the King to give up his freedom to serve Yona, and now he seeks to keep the King’s commands even after Il’s death. And why? Because it’s in the service of preserving a certain version of Yona that didn’t need to fight and didn’t need to kill. Yona’s struggling with than sense of guilt as well, feeling like she’s betraying her father by learning to take lives. But she’s realistic enough and understands her own goals well enough to know that preserving her father’s memory in this is neither wise nor practical. It’s just another piece of her (rapidly) expanding comprehension of how the world works. 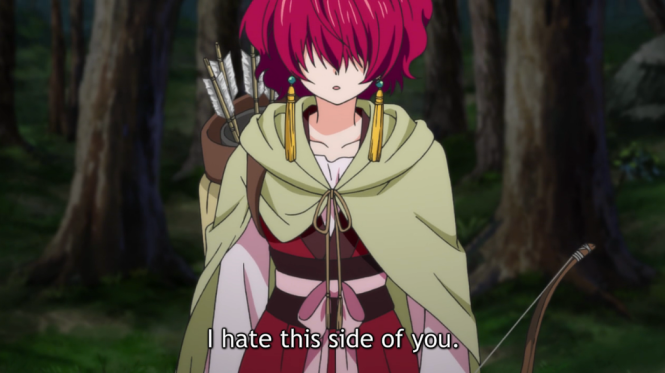 And so we find ourselves at what, for me, was the highlight of the episode: Hak and Yona’s final conversation about her training. While a lot of the training has been (wisely, I might add) framed in humorous fashion, this bit at the end is again hugely illuminating of Hak and Yona’s relationship. Hak is, really, doing everything he can to help Yona understand the path she’s taken by picking up a weapon, even if it means being cruel—and I don’t think it’s merely a physical injury that he’s inflicting upon himself by doing this. He has to distance himself from Yona, hold in his own feelings, and try again and again to convince Yona to separate her personal feelings form the reality of their situation—a situation where, someday, she might have to sacrifice Hak.

For Yona, this means she has to face the darkest parts of the man she desperately wants to protect, which not only means keeping Hak alive—but growing stronger herself so that Hak doesn’t become stained with darkness the way Soo-won has been. It’s a powerful moment for both of them showing that their playful friendship elsewhere is grounded in a seriously relationship. And this is the parallel to the Soo-won/Yona dynamic I mentioned earlier: Hak and Yona essentially have the same goal, but their motivations and methods are different. It speaks really well of Yona as a whole that it can sustain internal relational tension like this between two characters on the same side. 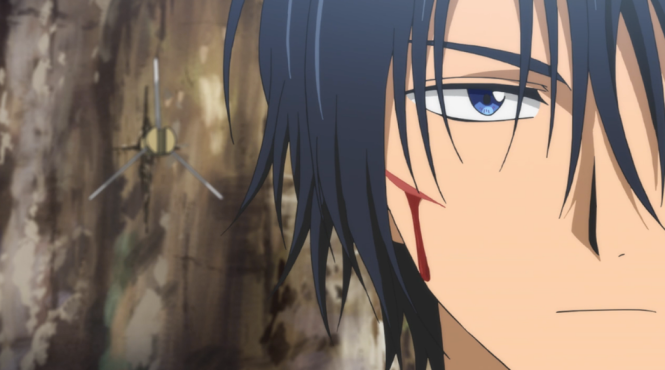 So, we get the first dragon warrior’s introduction next week (11 episodes in!). I’m really interested to see how they play this particular interaction between Yona and the warrior, because he is a direct representative of the divine. Even the soldiers in the forest, “guardians of the white dragon” as they style themselves, use language that is couched in religious terms. Fascinating stuff from one of this season’s best shows.

4 thoughts on “Akatsuki no Yona, Episode 9”