Well, that was definitely not how I was expecting this to all play out. If I’m being totally honest, I think KimiUso (again, that’s the abbreviation of the Japanese title, Shigatsu wa Kimi no Uso) overdid it this week in a number of place, but the overall effect was a net positive, if just barely. The thing about going for broke each and every week, regardless of content, is that it means some scenes come off like the show is beating you over the head (sorry for the unfortunate idiom use) rather than just being powerful. There were a lot more of the former this week. I don’t know what the hell whoever is in charge of the music was thinking at the start of this episode, but I’m fair upset about them wrecking Emi’s beautiful performance with the weird instrumental accompaniment that played along with her Chopin. I can’t even really begin to guess at the effect they were trying to create, but if it was an attempt to one-up the emotional heft of her performance last week, it was an abject failure. It drained the emotion of the piece and kind forced the whole flashback/recap sequence into a tonally strange area. Generally, I like the idea of using the recap to bring in some flashback moments (as opposed to the alternate of breaking up the previous episode’s scene proper), but the blame for the failure to connect lies almost exclusive at the feet of the music, as far as I’m concerned.

Now, if this hadn’t been about Emi, I’d probably be less angry, but I made no bones about how much I loved her character last episode. I’m already fearing that we won’t see all that much of her after this particular competition is over, so I wanted ever moment we had with her to be a good one—but stuff before the OP just wasn’t. And that’s a freaking shame because I actually did love the content. Everything from her elementary school self climbing to the top of the jungle gym to shout out her decision to her throwing away all her other activities to her first meeting with Oichiai to her secret desires—I loved all of the content. But through all that we were afflicted with the awful soundtrack, which really just ruined the experience of the scene for me.

Fortunately, Emi’s stuff after the OP didn’t suffer from the same abysmal soundtrack, letting the way she stomps off stage as if she was furious speak entirely for itself. Obvious observation incoming: Emi’s incredibly hot-blooded, and her performance was nothing but her summoning up emotion, letting it roll out and double back on itself and expand. It was phenomenally selfish, and beautifully generous at the same time.

And I love that she storms out to confront Kousei, and then realizes that she’s got nothing left to say. Everything she needed to tell him had already been said, and she’s smart enough to know nothing else she could say would be able to match her song. Bravo, Emi. Please come back to us soon.

Because Emi’s right—her performance (and Takeshi’s performance, but whatever) has connect with Kousei, made him feel again. They’ve both issued their challenges through their music, and so Kaori’s right. It didn’t matter what Kousei played because what he plays is fundamentally less important than the fact that he does play, and responds to that challenge. I like that Kaori has no illusions about this being a total triumph for Kousei. It’s just a step forward, she understands, a chance for time to become unfrozen.

So Kousei steps out on to the stage; and it’s kind of like the episode started to spin out of control without Emi on screen to guide it. Now, the trauma flashbacks start even before Kousei gets to the piano, which worked for me. This, I thought, would be the big step for him—overcoming all his fear and the weight of his past to sit down at the piano and play like a new person.

Well, I was wrong. While I really, really appreciate the layers of complexity that the flashbacks added to Kousei’s relationship with his mother, I have some real problems with the disconnect I felt arose between the information the show was feeding us about the past and the way Kousei’s current trauma is being portrayed. The first little bit we get is of him and his mom in the hospital. Kousei’s just won a competition and tells his mom that he’ll win as many as she wants him to if it’ll make her better. That makes sense, right? As a child, he loves his mom and wants to make her happy and have her get better. It’s childish, but understandable. So when he sees his mom sitting by the piano, he fears his old self and her expectations and the weight of trying to heal her coming back to him. But, he says, “Don’t waver. Don’t be afraid.” And I’m thinking, “Yes! Overcome! Overcome! This is what I want to see from this show!” And he does, with the inspiration of Emi and Takeshi and Kaori. We get a quick peek in on Emi, who isn’t pleased to see that he’s still playing the same emotionless music as he was two years ago. But, here KimiUso takes another step towards nuancing Kousei’s relationship with his mother. Emi and everyone else who criticized his style of playing couldn’t see the reason he played like he did—to help restore his mother’s health, which he felt he had ruined. Guilt, then, was the primary motivation for young Kousei. And, then, after he shouts that he wishes she would die, it comes back redoubled when she does.

What I’m trying to point out is that everything that happened in the episode pointed to Kousei having huge guilt issues over his relationship with his mother. He felt responsible for both her decline in health and for her death—overwhelming guilt is the what hangs over him, what holds him back, what breaks him.

A single moment of rage won’t erase a lifetime of guilt.

But the apparitions of his mother that haunt him make her look like a demon. In his visions, she smiles horribly, creepily, as if she’s enjoying his pain. Which is wrong wrong wrong all wrong. That’s not the projection a kid tormented by internally perpetuated guilt makes of the object of his trauma. She didn’t make him suffer out of malevolence, and he knows that. She didn’t take delight in his suffering, and he knows that, too. Why then should his visions of her indicate that she does? That being his perception makes no sense. Guilt is what hangs over Kousei, not the memory of an evil mother. What we see visually is at great odds with what we’ve been told by the actual story.

This is really a bit of a problem for me, but it’s less about the way the relationship was built and more about (surprise!) the way the visual language and direction of the show manifest Kousei’s interior reality for the audience to see. There’s a disconnect there, and it caused me problems. Yes, this is an issue I have with a creative decision. I think they made the wrong one in the way they portray Kousei’s mother. So, we’ll see where all this leads next week. Maybe we’ll get some more Emi! 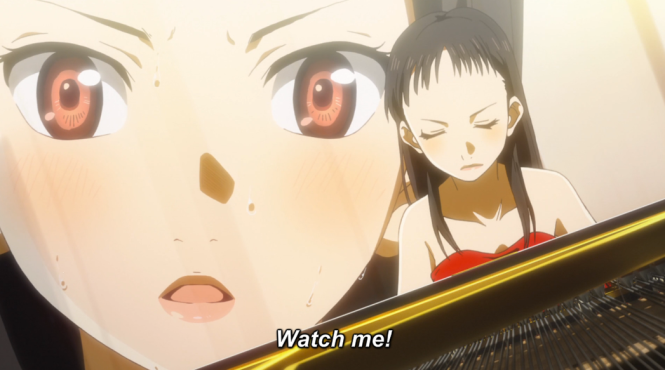 5 thoughts on “Your Lie in April, Episode 9”