There is no word that we haven’t stripped away all meaning from with overuse left for me to use to try and describe this episode. They all fall short. Let me try anyways.

This was Your Lie in April (Shitagtsu wa Kimi no Uso or KimiUso or whatever you prefer) at its absolute best, making use of all of its strengths, succumbing to none of its weakness, and letting the most potent element of all—the intensely personal unity between musician, emotion, and music—radiate out like recurring pulses of sunlight. This was nine episodes of on-again, off-again storytelling, some great emotional moments, a lot of painful trauma all breathing in together and out again to produce what I’m ready to call the best episode of the season; and maybe of the year. It is always, always a blessing and a privilege to experience something like this.

I could—and have—tried to analyze this episode on its technical merits, which are outstanding, but that seems to me to be the least honest way I can respond to this episode. To say I had an emotional response the the entirety of this mesmerizing episode would be an understatement. So, instead, let me try my best to highlight the moments that mean the most to me and explain why they did so. That’s the very least I feel I owe this episode.

~The Stars Shine at Night and in Our Lives~

“The stars shine at night, you know?” Watari tells Kousei at the beginning of the episode. It’s an innocuous enough statement, one of those obvious truths about the natural world that somehow captures a sentiment far beyond that of scientific knowledge. But, for Kousei, they mean something different. He’s a young man who has been, for two whole years of his short life, shrouded in darkness and in pain. His life has been lived in the night of his guilt and his regret and his anger. But the stars shine at night, you know? There’s no darkness so complete that it cannot be broken by light.

And we see where the lights in Kousei’s life have come from: from Watari, his lighthearted and loyal friend, a boy like him, struggling with feelings of inadequacy despite a desire to be more. From Tsubaki, a devoted and kind friend, one who has lit up his life despite the fact that she herself is no more certain of her purpose than he is. And, of course, from Kaori—the one he cares most about, the one to whom he wishes to communicate his feelings, the one who points out the stars to him while illuminating him like the sun.

How long can you fight alone? How long can you struggle against the worst pain you’ve ever experienced after running away from it? Kousei tries—he sees the bleak, soundless world of his guilt coming towards him and he does everything he can to keep it away and keep playing. Around him, the people who care about him beg for him to do anything but stop—Emi, with her beautiful desire to hear him play out of his heart once more; Tsubaki, who has waited all this time for him to be able to see the world in color again; Kaori, who has brought him to this stage where he fights the battle.

They all plead with him not to fall into silence once more, not to give up even if the piano refuses to answer him. 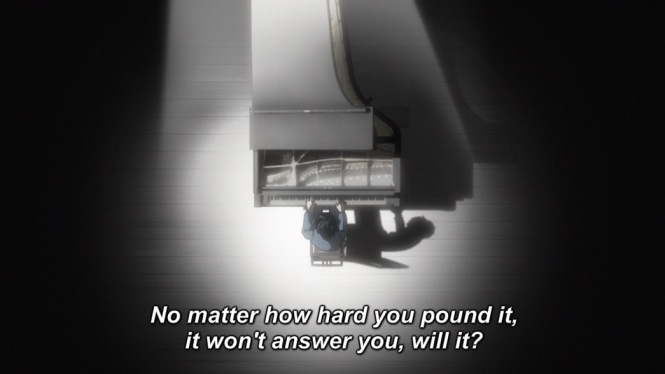 When you emerge from darkness—when the stars finally shine around you—what will you see?

Will is be a glimpse of the new driving out the old?

Will it be the space where you have come to know again what love is?

Will you see the child who can’t understand what is happening because of the light you bring?

Or will you hear the generosity of an old soul embracing what you offer?

Remember! Remember the people who tried with all their strength to show you the way. 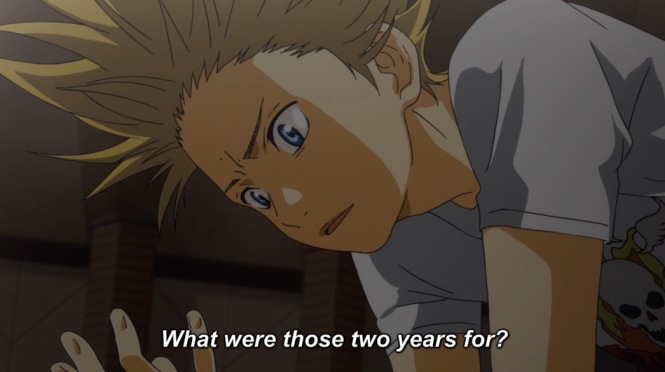 See the open beauty of the sky reflected around a new way to see the world.

See the smallest thing, the only thing necessary.

Let flowers fall as they must.

Return to the ones who love you.

You can merely sit beneath the tree and let its beauty blend with all you have. 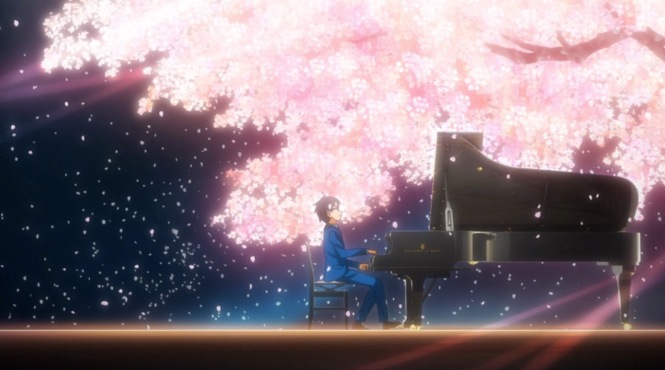 Find existence in this world. 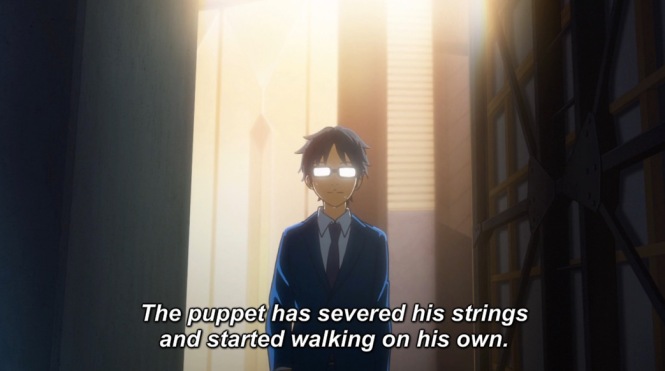 If there is one final thing I can say for this episode, it is only to ask those of you who read this—don’t forget what you saw today. Things like this ought to be remember. In a world that so constantly feels like it’s enveloped in night, moments of livid beauty like this become our stars. Don’t let it fade away. Remember it.